“We’re not here to educate fans – we make sustainability fun” 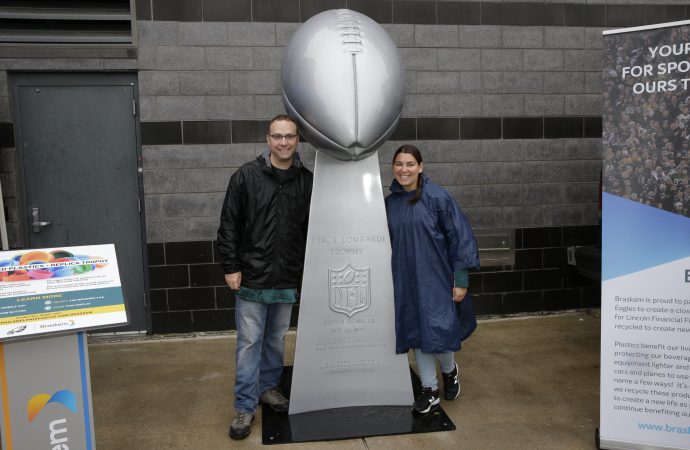 Philadelphia Eagles director of fan engagement, Norman Vossschulte, explains how sustainability has played a key role in cementing relationships with fans and sponsors

Deepening relationships with fans and sponsors is, for most sports organisations, the name of the game. And while sustainability is increasingly referenced as a platform to do both, there aren’t yet a huge number of examples to demonstrate this.

That’s probably why so many people ask Norman Vossschulte, Philadelphia Eagles director of fan experience, what his secret is.

Sustainability has been part of the NFL team’s ethos since its stadium, Lincoln Financial Field, was built in 2003. The Eagles were very much early adopters in this sense, but under the watchful eye of Vossschulte the franchise has evolved its Go Green programme by leveraging its sustainability efforts to talk to fans and sponsors.

First, let’s talk about fans. How can sports teams engage fans in a topic like sustainability – during a game day – in an authentic way?

Spectators entering the stadium are often met by advertisements that encourage them to “kick back” their thermostats to save on their electricity bill or to recycle beer in the restroom but the trash outside.

The thousands of people who take the Lincoln Financial Field tour annually are exposed to the stadium’s huge 11,000-panel solar system, that generates 40% of the venue’s energy for the entire year, and its aluminium recycling centre.

But it’s the Eagle’s nine-year partnership with plastics-maker Braskem that has really captured the imagination. A few months after the team won the 2018 Super Bowl, Braskem took advantage of the jubilition generated by the success and produced an oversized replica of the Lombardi Trophy (main image) out of bottle caps collected throughout the season. The structure has since taken residence in the stadium’s lobby where fans by the thousand pose with it for a picture.

Braskem, which has a headquarters in Philadelphia, also used this technology to manufacture bicycles for an annual bike race the Eagles host to raise money for its autism foundation – a project devised by the team’s owner Jeffrey Lurie, which has generated $7m in three years.

“On the day of the race, Braskem had a tent to showcase these bikes. They looked so incredible and thousands of people asked about them,” Vossschulte explains. “We asked them if they’d ever been to the stadium and had a bottle of water, and told them that these bikes were made out of those bottle caps.”

The creative nature of this initiatives naturally garner a good response from fans. And a piece of research the Eagles commissioned alongside a local university suggests engagement will grow. After collecting extensive fan data, it became apparent that for the young generation sustainability in incredibly important. In fact, for fans in their 20s it was the “second most important driving factor of them becoming an avid sports fan”.

The findings, Vossschulte says, gave the Eagles “quite a big boost” and vindicated its continued focus on sustainability.

“It showed us how important our sustainability programme is,” he adds. “Let’s put all of our efforts into that, because the up-and-coming fanbase deems it very important for us to be in the sustainability sector. This younger generation is coming into the workforce and is able to purchase tickets.”

Vossschulte, who will give a keynote on sustainability and fan engagement at the Sport Positive Summit in London in March, acknowledges that the Eagles position in the “sustainability sector” is becoming increasingly important for commercial relationships as well.

Energy company NRG, in wanting to showcase its renewable energy technology, offered to build the “largest solar panel plant of any sports venue in the world”, and offered the Eagles energy at a reduced and fixed rate.

“The fixed rate is actually much more important to us because of the size of our stadium,” Vossschule explains. “Energy prices fluctuate in America so much that you have to build a quarter of a million dollar annual buffer into your budget that you may or may not be using, but either way the money can’t be touched.

“When we formed our partnership with NRG it allowed us a fixed price for the next 30 years, so we’re able to reallocate that money, which is huge. Over 30 years that’s $7.5m we can reallocate to our sustainability efforts.”

Although Vossschulte is the Eagles’ most visible spokesperson when it comes to sustainability efforts, the organisation boasts other leaders like Jason Miller, the vice-president of stadium operations, and makes sure all employees are engaged in the subject.

An internal group, called the ECCO Community, features members of the Eagles’ communications, community engagement, and operations departments, that makes sure all strategic conversations include sustainability as a topic.

The desire for sustainability to remain a core objective of the Eagles, even in the event of individuals like Vossschulte seeking out pastures new, was the motivation behind the franchise becoming the first sports team to achieve ISO 20121 certification – a management system for hosting green events.

Honeycomb Strategies helped the Eagles implement the system, which is “almost like a manual for our sustainability efforts”.

“We could just take all of our sustainability efforts and put them down on paper so that if I or Jason ever left, someone could just pick up the manual and take over,” Vossschulte says. “We rewrote the manual a little bit to fit the needs of an existing venue rather than a one-off event. We have 2.5 million people coming through here every year.”

But the efforts won’t stop their. During 2020 Vossschulte hopes the Eagles will launch a reusable souvenir cup to reduce waste even further and avoid recycling plastic cup. The stadium already has a 99.9% landfill diversion rate, but Vossschulte strives to keep pushing the envelope with the elimination of straws (even compostable straws) next on his agenda.

“We’re always looking at what else we can do. There are many things on the horizon.”