Football, coalitions and the SDGs: Danone’s approach to sustainability 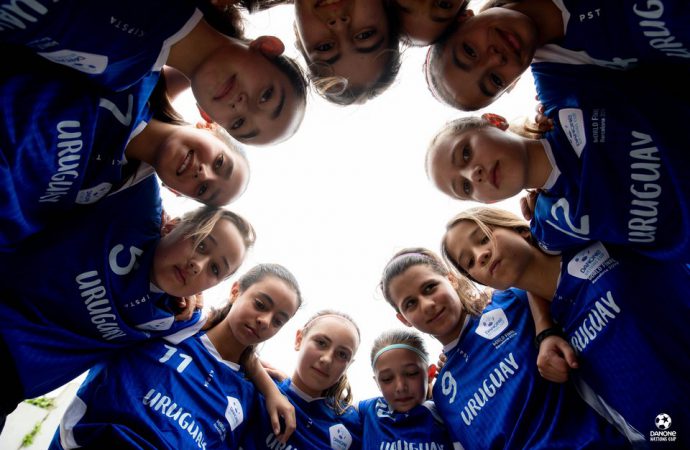 Projects like the Danone Nations Cup and ‘one person, one voice, one share’ employee engagement initiative helps the food and beverage company put sustainable development at the heart of its strategy

Earlier this year, UN Global Compact and strategic consultancy Accenture asked 1,000 chief executives about their respective positions on sustainability and, more precisely, whether they think industry needs to look beyond dollars and cents and build social development and environmental stewardship into their core business operations.

Depending on what way you look at it, the findings were mixed.

The vast majority of chief executives agreed that businesses should make a far greater contribution to achieving the UN’s 2030 Sustainable Development Goals: 88% believe that the global economic system needs to “refocus” on equitable growth. Around 78% asserted that economic growth should be decoupled from the use of natural resources and environmental degradation.

And an astonishing 95% of CEOs claimed they are “personally committed” to ensuring their companies lead on sustainable development.

Despite the bold commitments, many business leaders admit significant challenges in prioritising sustainability. While 57% see sustainability linked to revenue growth in the next decade, only 40% see the link now. In terms of brand value, 71% see a connection with social and environmental responsibility over the next decade compared with 58% who see it now.

That’s a major issue as more than half of chief executives questioned (55%) stressed that they are under pressure to deal with the here and now and have little scope to invest in long-term strategic investments. But, for the sake of the planet and the continued health of some of these businesses, something has to give.

“Be bold or die,” Emmanuel Faber, chief executive of food and beverage giant Danone told the Sustainable Brands Summit in Paris in April. Companies that don’t “face the prospect of being useless.”

Under Faber’s leadership, there are very few major multinational companies that have taken such a bold approach to sustainable development. Indeed, PwC’s eye-opening 2018 study on business and the SDGs referenced Danone as one the best practice examples of a business integrating the SDGs within its strategic business plan.

In 2017, the company outlined nine 2030 Danone Goals that combined business objectives with UN SDG targets. It’s first Danone Goal, to ‘offer superior food experiences in innovative ways’, is linked to SDG3: Good health and wellbeing and SDG12: Responsible consumption and production because of its focus on using sustainably sourced ingredients.

Similarly, its objective to ‘preserve and renew the planet’s resources’ is connected to seven SDGs: zero hunger, clean water and sanitation, affordable and clean energy, responsible consumption and production, life below water, and climate action.

“The most important thing is to translate the SDGs into company KPIs,” Mathias Vicherat, Danone’s secretary general, told The Sustainability Report. “The SDGs should be the guidelines for the social and environmental impact of companies.”

Making the Sustainable Development Goals part of the company’s culture has been facilitated by its ‘one person, one voice, one share’ governance model, Vicherat explains, which allows every one of Danone’s 100,000-person global workforce to help build the SDG roadmap based on local development issues.

The Danone Nations Cup – the “world’s biggest football tournament” for 10-12 year-olds – is probably the project that best illustrates Danone’s ambition when it comes to addressing the social aspect of sustainability on a global scale. Earlier this year in Barcelona, 700 children – 20 boys teams and eight girls teams – competed against each other with the SDGs as the backdrop.

During the tournament, the children were given the opportunity to attend workshops (below) explaining the significance of the SDGs. When asked about the SDGs that are most important to them, the children mostly voted for gender equality, clean water and sanitation, climate action and zero poverty.

“We’re going to write to the UN secretary general to express this result on behalf of the children,” Vicherat say. “We want the Danone Nations Cup to keep promoting excellence in sports, gender equality and water access to show that sport can be linked to social initiatives.”

For the 2019 edition of the tournament, Danone partnered with Watering Minds, an NGO that provides safe water for schools, and sportswear retailer Decathlon to fundraise for water access in India. The money was generated through the sale of shoelaces manufactured from old plastic bottles at various Decathlon outlets.

Partnerships, Vicherat adds, is a crucial component to the growth of the Danone Nations Cup and Danone’s strategy more widely. Indeed, the secretary general talks of a “coalition mindset” in which a number of organisations – sometimes commercial rivals – work together to achieve something more significant.

Using gatherings of global leaders as the backdrop to raise awareness, Danone led two coalitions in 2019 related to tackling inequality and protecting biodiversity.

The former was launched at the G7 Summit in France during August. Danone led 34 major companies (brought together under the banner Business for Inclusive Growth) to advance human rights throughout the business value chain, build inclusive workplaces and strengthen inclusion.

One Planet Business for Biodiversity, the second coalition, stepped up during the subsequent UN Climate Action Summit in New York. It saw industry giants like Google, Unilever, L’Oreal and Mars launch an initiative to protect and restore biodiversity within their supply chains and product portfolios.

It’s this commitment to sustainable development that has seen a significant part of Danone’s family of companies (representing more than a third of its turnover) achieve B Corp status, with Danone North America representing the largest B Corp in the world.

Although B Corp certification can be complex, it ultimately comes down to one thing: is the company considering how its operations are impacting its workers, customers, suppliers, wider community and the environment? Legally, B Corps have to show that they are taking these issues into consideration, and are actively trying to make the situation better.

Achieving B Corp status for the whole business is one of the company’s long-term goals, as is becoming carbon neutral by 2050, converting to 100% recyclable, reusable or compostable packaging by 2025, and using 100% renewable energy by 2030.

“We’ve just launched the second consultation where we’ve invited our 100,000 employees to express their opinions about our nine goals, what the priorities are in their countries and how to achieve B Corp certification,” Vicherat explains. “We’ve also put in place a committee of 26 Danone employees from all over the world and directly connected them with our board of directors to add their point of view on a regular basis to our global roadmap.”