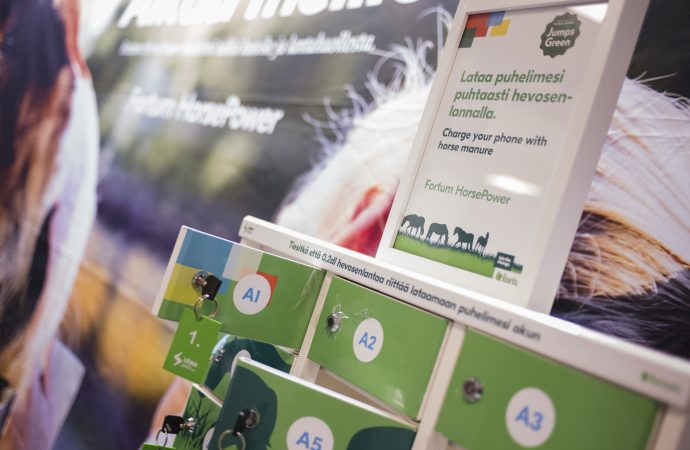 All electricity for the four-day event came from manure collected from competing horses, which was transformed into energy by sustainable power company Fortum

Around 100 tonnes of horse manure has been transformed into electrical energy to power the Helsinki International Horse Show, which also hosted the FEI World Cup jumping qualifier.

All electricity used during the four-day event – including the energy used for scoreboards, lighting and smartphone charging stations – came via a manure-to-energy system developed by sustainable power company Fortum.

Surplus energy generated via the manure, that was collected from competing horses, went back to the national grid to heat homes in the Helsinki area. It’s the fifth year in a row that the system has been used to power the event.

“The manure-to-energy system holds immense potential for countries with large horse populations and has shown that out-of-the-box solutions are needed if we are to move away from our reliance on fossil fuels,” said Anssi Paalanen, the vice-president of Fortum HorsePower.

“It is possible to charge a phone with only 0.2 decilitres of horse manure and the manure produced daily by two horses can generate heat for a single family home for a year.”

Since establishing its manure-to-energy system in 2015, Fortum has collected 70,000 tonnes of horse manure, which provides heat for 1,250 customers. The system partly reduces the reliance on fossil fuels and provides an alternative to disposing of manure via landfill.

FEI president Ingmar De Vos said the system demonstrated that “ideas for alternative energy solutions can come from the most unexpected places.”

“The Helsinki initiatives make a tremendous contribution, not just in terms of the value they deliver to equestrian sport, but also for the wider implications they have for local and regional communities. It clearly shows that the equestrian community is serious about its responsibility to preserve the environment.”

Tom Gordin, the event director of the Helsinki International Horse Show, added that the initiative was part of the competition’s vision to become a “worldwide leader for sustainability in equestrian events.”

The manure-to-energy project is one of a number in the Helsinki Jumps Green sustainability concept, with an additional focus on recycling, paper reduction, environmentally-friendly procurement practices and sustainable food consumption – in line with the FEI’s Sustainability Handbook for Event Organisers.