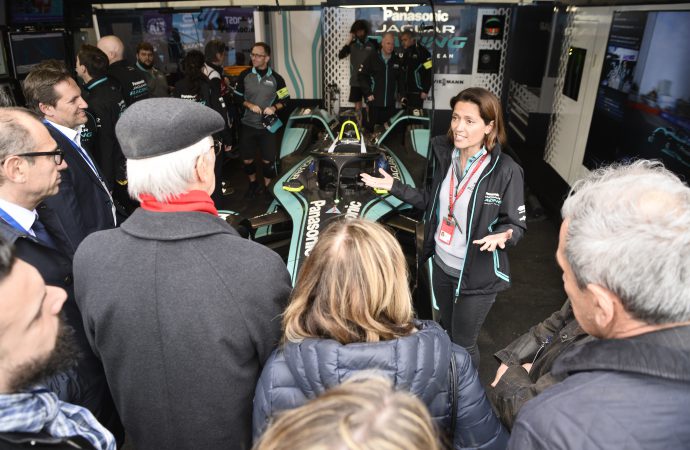 The calendar for the 2019/20 season of Formula E has been decided and revealed. Twelve cities representing five continents will host the electric car racing series, giving local residents a glimpse into the future of mobility as well as a sporting spectacle that is quickly growing in popularity.

During the 2018/19 season, Formula E’s global TV audience grew by 24% from the previous year to 411 million viewers, while more than 400,000 spectators came to watch the events live. Over its first five seasons, the sport has been successful in increasing awareness around electric mobility and clean transportation, particularly among a young demographic (72% of Formula E fans on social media are under-35) and those who attend events through its interactive Race Village.

Indeed, influencing consumers to buy electric cars was one of Alejandro Agag’s key motivations when launching Formula E. But to make the transition to low-carbon mobility a seamless one, policy-makers and businesses must create the optimal conditions.

That’s why, in 2017, the FIA – the International Federation responsible for Formula E – launched its Smart Cities Forum to coincide with three Formula E races per year. The Smart Cities Forum is a meeting place for the city’s key decision-makers, private businesses, FIA members clubs and other important stakeholders to discuss mobility challenges, try to find solutions to them collectively, and, ultimately, make it easier for consumers to make sustainable choices when it comes to transportation.

It was also created as a content platform for many of Formula E’s major sponsors, including ABB, Julius Bär and Michelin, to demonstrate their links to e-mobility, smart city infrastructure and sustainable development.

“The forum audience is totally different (to the race audience),” says Maria Strigunova, the FIA sustainability programmes manager. “We’re really talking to the experts and city leaders who can come and learn something new, and then bring that back to their communities and constituents. They are policy-focused and advocacy-raising events.”

During the last Smart Cities Forum in Rome in April, the city’s mayor, Virginia Raggi (below), and her counterpart from Brussels, Philippe Close, talked about the mobility challenges their cities are facing, with the former expressing her desire to use Formula E as a tool for increasing consumer confidence in electric cars.

According to the 100 Resilient Cities database, the Italian capital has many issues related to transport and mobility: inadequate public transport systems, infrastructure failure, traffic congestion, and even poor air quality, of which the traffic is a major contributor.

Electric mobility is one of Rome’s key strategic priorities. In fact, the 2017-2020 Rome Electric Mobility Plan has been developed to improve infrastructure (such as access to car charging ports) in the city. The Department of Mobility and Transport is also working on a project to replace all public vehicles with zero-emissions vehicles.

But while the intentions are noble, the city has to turn ambition into action and find the partners it needs to make its vision a reality. That’s where, according to Strigunova, the Smart Cities Forum comes into play.

As well as adopting a conference-style format, in which various stakeholders discuss important mobility issues, the forum gives policy-makers the chance to discover innovative companies with mobility solutions through a start-up contest, in partnership with start-up accelerator MassChallenge.

Six start-ups are given the opportunity to pitch in front of a jury, with the winner offered the chance to present its project in front of the forum audience. Parknav, an artificial intelligence firm that increases parking efficiency by giving drivers real-time data, was able to present its product in Rome, for example.

Rome, of course, is not the only city facing major infrastructure problems. Urbanisation is growing at a rapid rate; indeed the UN expects that by 2050 68% of the global population will live in cities or urban areas –  a statistic that will exacerbate the problems that cities already face with less dense populations.

It’s true to say that major cities the world over will face similar issues related to overpopulation and ageing infrastructure, but there will be location- and cultural-specific nuances. In Mexico City, where the first of the 2018/19 Smart Cities Forums was held, there are complications around expanding the existing mass transit system. In Hong Kong, where the second event was hosted, much of the discussion was around population. While two-thirds of the population will reside in urban areas within 30 years, 90% of that growth will take place in Asia.

Over the course of the 2019/20 Formula E season, the FIA Smart Cities Forum are likely to be hosted in Santiago (Chile) and London (United Kingdom) – two very different cities.

“We have a number of criteria that define our final choice of destination,” Strigunova explains. “First of all, we need to ensure the geographical scope covers different regions as we are a global membership organisation.

“The second most important part is our local representation. Our membership is made up of automobile clubs around the world, and we rely on them when it comes to establishing the context with local political authorities and identifying thought leaders in that country who could speak or present.”

Once the cities are chosen, the FIA works on the content of the forum to make sure it is relevant for the people in attendance. Using resources like Frost & Sullivan’s Smart Mobility City Tracker – which has logged more than 100 mobility and smart city KPIs for 50 cities around the world – Strigunova and the event organisers craft content around the issues that need to be discussed as a priority.

“The way we measure success is through engagement,” adds Strigunova. “I think for us in terms of content creation the forum is in very good shape, particularly regarding the level of speakers and different expertise. And there’s a clear sign that partners can see the value is what is happening. Half of the programme’s budget is coming from external sources, so we need to stay accountable.

“Every partner has the opportunity to demonstrate their content and talk about their innovations. Sometimes the link is not too clear. Julius Bär is a private bank in Switzerland, but it’s doing a lot of research and development on automotive trends and renewable energy, which you might not know about unless you hear it at an event like ours.”

Another pillar of the forum is the Smart Cities Award, which used to be awarded to a city for a novel project in the field or urban mobility – anything from a car-sharing scheme to a traffic management system. But, according to Strigunova, comparing Rome with Hong Kong is comparing apples with pears, so the award has since become an urban mobility study conducted on behalf of a chosen city.

“This is a very detailed urban mobility performance study, which was conducted for one city,” she says. “And it was decided this year that it will be Rome because 2019 is the second time we’ve brought the forum there and we wanted the study to be part of the legacy.

“They can use the study for future planning and policy formation needs. And I think, for the future, that is the model that we will keep.”

What other sports are well positioned to contribute to smart city development and sustainable innovation for urban areas? Let us know in the comments below.