Christiana Figueres: “It’s not in the interest of the Olympics for climate change to reach the extremes being forecast” 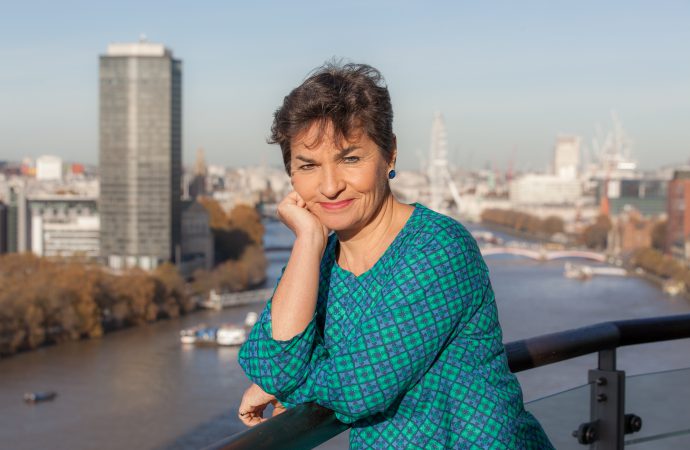 Three years after completing her second and final term as executive secretary of the United Nations Framework Convention on Climate Change (or UNFCCC), Christiana Figueres is still encouraging, lobbying, cajoling and pressuring governments, industry and individuals to take substantial and concrete action towards halting the climate crisis the Earth is currently hurtling towards.

When she sits down with The Sustainability Report, Figueres projects optimism (her new social and environmental change movement is called Global Optimism) and frustration at the same time.

Optimism because the public is “starting to understand climate change better”. “CNN hosted a whole discussion about climate change with the Democratic candidates for the US Presidency (elections are in 2020), which has never happened before,” she explains. “And the fires in Brazil have certainly caught attention.”

But frustration that growing awareness has not translated into new voting behaviours.

“People should all be voting for leaders that understand the threat of climate change and are willing to back that up with policy,” Figueres adds. “In the case of the US (which pulled out of the Paris Climate Agreement following the election of Donald Trump) it’s a very personal decision. It doesn’t have anything to do with awareness. To deny science and protect the financial interest of the fossil fuel industry – it’s a crime.”

When Figueres took to the stage at the 134th International Olympic Committee Session in June, she wasn’t nearly as scathing in her assessment. But her message to the Olympic Movement and wider sports industry was clear: not enough was being done by sport to mitigate climate change.

It was a bold speech by Figueres, who was one of the major architects of the Paris Climate Agreement. Particularly as the IOC had just awarded what it hopes will be one of the most sustainable Winter Games ever to Milan and Cortina in 2026.

The Italian bid team was the first to sign the new Host City Contract in which a focus on sustainable development is one of the main requirements. And while Figueres used the platform to praise the IOC for making sustainability one of its key priorities as part of its Agenda 2020 strategy – particularly its ‘carbon-neutral’ status, sustainability strategy and recent construction of its LEED Platinum Olympic House – she let those in attendance know in no uncertain terms that progress could not stop there.

“The Olympics is one of the most watched, listened to and followed events in the world, and to have the entire Olympics – whether it’s a Summer or Winter Games – go by for there never to be a mention of climate change is, frankly, very dangerous to the Olympics,” she says three months after her impassioned speech.

“I think that in preparing for the competition and during the event the coverage should bring the attention of everyone to the relationship between the competition and athlete performance with the temperature and weather. The Olympics has a huge megaphone, but that megaphone is not being used to raise awareness about climate change. It’s also, frankly, not being used to raise awareness about air pollution.”

Athletes, says Figueres, are disproportionately affected by both. The summer of sport sandwiched between her IOC address and this interview has thrown up a number of examples to add weight to her claim.

A number of test events for next year’s Tokyo 2020 Olympics were negatively impacted by increasingly hot conditions. A marathon swimming test event became a struggle for competitors as temperatures soared to 30°c before 7am, while young athletes competing in the 2019 World Rowing Junior Championships – the test event for next summer’s regatta – had to be treated for heatstroke.

Just last week, at the IAAF World Athletics Championships, 28 of the starting 68 marathon competitors had to pull out because of high temperatures and more than 70% humidity – despite the race being scheduled at midnight.

And the crux of Figueres’ rallying cry in June remains the same; Olympic sport – and by extension, the Games – is fighting for its existence.

“Both Summer and Winter Games are going to be majorly negatively affected by climate change,” she explains matter-of-factly. “Hosting the Games is already so expensive that cities have a hard time putting forward their candidacy – if on top of that we have increased costs because of weather or temperature, we have a real problem on our hands.

Figueres adds: “I really wanted to motivate the IOC to use its unparalleled voice to raise awareness about climate change and help all of us to understand our responsibility in addressing climate change. It’s not in the interest of the Olympic Games for climate change to reach the extremes that are being forecast.”

That means by the time the Opening Ceremony signals the start of the 2030 Winter Olympics, we could be living in a world totally unrecognisable from the one we live in today.

During her speech, Figueres said that the IOC had the “responsibility” and “grand opportunity” to inspire the public to rise to the challenge of taking on climate change. And despite the punchy nature of her speech, she insists that President Bach was “quite grateful” for putting climate change in the spotlight for the wider Olympic Movement.

“I do know that since then the IOC has been buckling down on how it can use its communication potential, so I’m expecting a much more detailed working plan,” she explains.

In the same way that Figueres was heavily involved in the creation of the Paris Agreement, the IOC was a catalyst for the UNFCCC’s Sports for Climate Action Framework – a piece of policy that commits signatories to measuring, reducing and offsetting their carbon footprint in line with the Paris Agreement.

Since the framework was revealed at COP24 in Poland last year, the IOC has been encouraging other parts of the Olympic Movement to adopt its principles while supporting International Federations and National Olympic Committees to take the necessary steps.

Sport, she acknowledges, is not a heavy polluter compared to other industrial sectors, but one of the biggest victims of climate change. Figueres is particularly fearful for the future of the alpine sports industry due to the reduction in snowfall every year.

It’s the fossil fuels industry that should take a significant proportion of the blame, she adds. And while it’s true to say that the oil and gas sector has traditionally been a big financial supporter of the Olympic Games, influential environmentalists, such as Friends of the Earth, have stated that sport sponsorship and the fossil fuels industry is now totally incompatible. Does Figueres agree?

“No, no, I don’t think it’s incompatible,” she says. “But I do think that if there are fossil fuel companies that are going to help finance the Olympics they have to be willing to buy into the fact that the Olympics has to call attention to climate change and air pollution. They cannot silence that message from the Olympics – and if funding the Olympics is a good incentive for these companies to do the right thing, then that’s actually a good thing.”

More broadly, companies that are regular sponsors or suppliers of sport that are ignoring their climate impacts are “contributing to their own demise”.

“If the sports industry is threatened as an industry by climate change, then their businesses are also threatened,” says the IOC Sustainability Commission member. “The threat goes all the way up the value chain. From that perspective it is also in the interest of all those companies that sell into the sports industry to lower their emissions and become carbon neutral as soon as possible.”