Can sports venues have a positive impact on the natural environment? 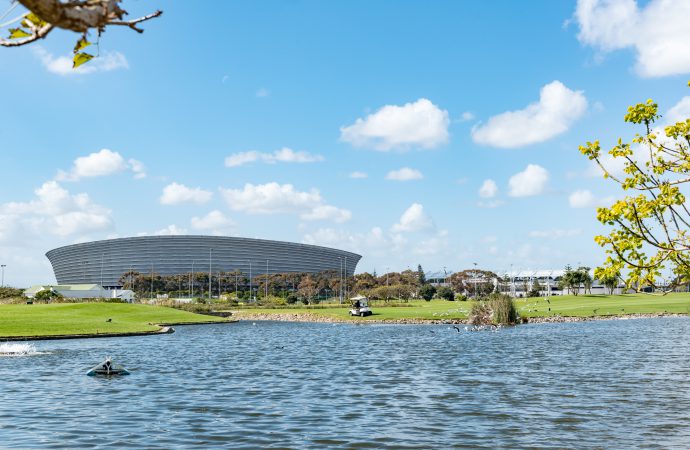 A guide published by the International Union for Conservation of Nature (IUCN) seeks to examine the impact stadiums and arenas have on biodiversity. Can such construction projects help the environmental cause, rather than hinder it?

From the architectural splendour of football stadia to pristine, verdant golf courses, top-level sports venues are certainly not short of charm or allure – yet the environmental impact of erecting such complex structures is all too often overlooked, with little acknowledgement of the threat posed to the biodiversity of the surrounding area. The ramifications on nature do not simply end once the venue is completed – they last for decades, and their consequences can be irreversible.

Nevertheless, the conversation surrounding the sustainability credentials of sports venues has evolved significantly in recent years, not only with regard to reducing their impacts on nature but also in a net positive sense through delivering conservation benefits. This change in attitude has been in large part thanks to the work of the International Union for Conservation of Nature (IUCN), an organisation whose guide published earlier this year helps sporting bodies gain a better understanding of biodiversity considerations before, during and after the construction of new venues.

Entitled ‘Mitigating biodiversity impacts of new sports venues’, the guide uses a concept called the mitigation hierarchy as a framework to manage such impacts. As the deputy director of IUCN’s Global Business and Biodiversity Programme Giulia Carbone explains, this hierarchy covers the whole life cycle of a new project – from the conception and design to the construction, operation and the commissioning – and follows a specific course of action.

The avoidance of impact

“The mitigation hierarchy looks at four critical steps, from the most important and most effective to the last resort,” Carbone says. “The most effective is the avoidance of impact. There’s a whole section in the guide where we make recommendations on how new venues should be built, such as avoiding construction near world heritage sites or in protected areas.

“After avoidance, there is the minimisation of impact. This cannot be extensive because it depends on the type of habitat and the size and type of building. If you’re constructing a stadium compared to a golf course, of course it’s different, so that’s how the report examines these ideas.

“Then you have restoration, which is challenging from a biodiversity conservation point of view. It can also be more expensive than avoidance. And finally, as a last resort, you have offsets of the residual impact. If by any chance you have some residual impact, then you have the option of offsetting, which is basically taking action in another area and compensating for the same amount or more of what you have lost in the area of your project.”

In Carbone’s view, the key takeaway from the guide is that the best way to manage biodiversity impact in sports venues is to avoid them altogether. While in some venues, it can be more difficult to be flexible because of the need for a certain type of terrain, it is still important that an effort is made to look at all the alternatives before going into a protected area or a world heritage site. The impact can be considerable, particularly when constructing ski slopes or golf courses where a high occupation of land is required. If this land is an important habitat for some species, problems inevitably arise.

“That to me is the key message of this guide,” Carbone continues. “Impact has got to be managed in a logical way, and the mitigation hierarchy gives you this logical framework, starting from the most successful cost-effective measures all the way to the end.

“Avoid jumping to the end to talk about offsets. Sometimes, organisations say they offset because they do some good, whereas in fact offsets imply that you have a residual impact. For this reason, we shouldn’t try to use offsets as a good solution. It’s much better to avoid all impacts.”

Case studies are a prominent feature of the guide, highlighting examples of new sports venues that adhere closely to the mitigation hierarchy. When evaluating biodiversity initiatives in urban sports parks, for instance, the guide singles out the eco-friendly 20,000-capacity New Nagyerdo Football Stadium in Debrecen, Hungary for praise. Situated in the old Nagyerdo forest and completed in 2014, the new venue replaced the original football stadium built in the 1930s and successfully preserves the forest’s key species, while also featuring a transitional promenade (below) that takes spectators from the forest and park area into the stadium.

Other venues mentioned include the Biodiversity Showcase Garden near Cape Town’s Green Point Stadium (main image), a 12.5-hectare area for Cape flora that forms part of the wider Green Point urban park, not to mention the World Rowing Federation (FISA)’s ongoing strategic alliance with the World Wide Fund for Nature (WWF) to promote clean water and tackle water pollution. Carbone has been impressed by the FISA’s sustainability efforts in other areas too.

“For me, the case study that best reflects the work the IUCN is trying to achieve is the FISA’s commitment to safeguard UNESCO World Heritage Sites. This is an example we are using regularly to show how a sports federation can really take action and avoid impact.

“They have embedded this pledge into their policies and have been cooperating with the UNESCO World Heritage Centre, the administrator of the World Heritage Convention, on how to do this in practice. To me, this is an excellent example of proactive avoidance and an understanding of impact and how to manage it.”

Learning from the negative

That said, identifying case studies as examples of best practice has not come without its challenges for the IUCN. Sustainability and biodiversity are still recent concepts in the sport industry, meaning there is no strong precedent for collecting and sharing information in these fields. What’s more, the IUCN would occasionally encounter negative examples of sports venue construction, such as the damaging environmental footprint from Russia’s $50 billion Sochi 2014 Olympic Winter Games and the expansion of the Bansko ski resort in Bulgaria’s Pirin National Park, a UNESCO World Heritage Site. According to Carbone, an awareness of such projects proved to be equally as important when compiling the guide as the positive examples that were published.

“I’m a believer that you can learn from negative examples,” she says. “We decided to focus on the positives by not including such examples in the guide, but we did learn a lot from the negatives. The key point that comes up is that the lasting impact on nature could have been avoided by not going into certain areas.

“When we look at a specific example, we check to see if it’s located in an area of high biodiversity. We try to give an indication if we think it’s compatible or not, or whether or not there is going to be an impact. If we are not really sure and there is some uncertainty, the precautionary principle should prevail; they shouldn’t be built there. We have seen a number of large venues constructed in protected areas that have caused a huge amount of damage.”

A recognition of the mistakes made at Sochi 2014 led to a partnership between the IUCN and the International Olympic Committee (IOC) to produce guides on reducing sport’s impact on biodiversity. The current publication is the second in a series of four, with the final guide due to be launched at the next IUCN Congress in June 2020. Although the content is produced exclusively by the IUCN, the IOC helped structure the guide and was instrumental in identifying case study examples. The partnership also extends to the IUCN providing input on the Candidature Process for the 2024, 2026 and 2028 Olympic Games, as well as supporting other tasks related to the IOC’s sustainability strategy.

For Carbone and the IUCN, this is just the beginning; with the support of the IOC, they are determined to use the guide as a means to ensure that biodiversity considerations become the norm when constructing sports venues in the future.

“One of the reasons why the IUCN decided to establish a partnership with the IOC is because while there are some negative impacts, ultimately it’s more about opportunities and the role sport plays in today’s society in getting people interested and excited about things,” she concludes.

“In turn, we can raise awareness about biodiversity, mobilise stakeholders to invest more in nature and promote the idea that sport venues can drive conservation actions on the ground.”

What other examples are there of sport having a positive impact on biodiversity and the natural environment? Let us know in the comments below.