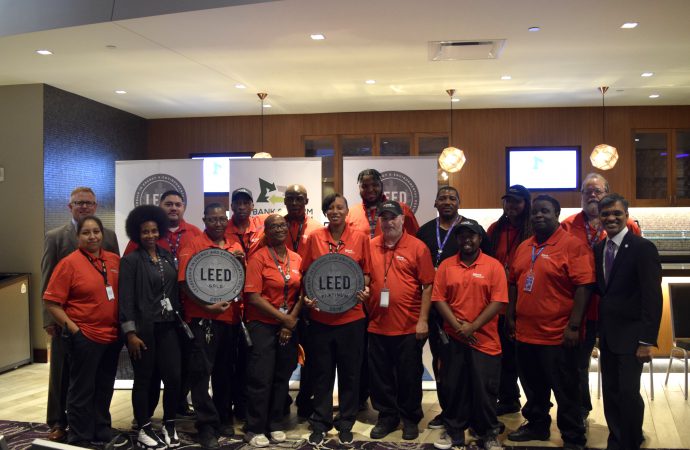 Three years ago, the US Bank Stadium in Minneapolis, home of NFL franchise the Minnesota Vikings, opened its doors and became one of the most impressive sporting arenas in the country. The indoor, 66,000-capacity venue has already achieved some notable milestones during its short life: it hosted the Super Bowl in 2018 and, earlier that year during the playoffs, it became the backdrop for what was to be known as the ‘Minneapolis Miracle’.

Finding themselves 24-23 down with 25 second remaining, the home team managed to score a 61-yard touchdown as time expired – the first time such an event has happened in NFL playoff history.

The US Bank Stadium also received LEED Gold certification (the second highest level) for sustainability in the building and construction phase. To become the first sporting venue to achieve LEED Platinum (the highest level of certification) for the operations and maintenance side of things was the goal thereafter, and while reaching such a goal may not go viral or secure legendary status like the Minneapolis Miracle, it would set the benchmark for the way stadiums are maintained in relation to environmental stewardship and human wellbeing.

There were a number of motivating factors driving the Minnesota Sports Facility Authority – the owner of the stadium – and, by extension, the Vikings’ staff to achieve the highest level of LEED certification when it came to operations and maintenance.

Firstly, a number of other local sports facilities had achieved a high level of sustainability certification in both the building phase and the maintenance and operation phase. Target Field, home of Major League Baseball team the Minnesota Twins, was awarded LEED Gold for operations in 2017, while the Xcel Energy Center, where the NHL’s Minnesota Wild plays, became the first complex in the world to achieve LEED, Green Globes and APEX/ASTM sustainability credentials.

According to Bradley Vogel, the facility’s project manager for sustainability and operations, the fact that the US Bank Stadium is a government entity and a taxpayer funded venue means that “keeping up with the Joneses” is important from a reporting and reputational aspect.

Because of its status as a publically-funded structure, the venue was under pressure to incorporate a sustainability plan put together by the Minnesota Pollution Control Agency. But more than anything, the decision to go ‘all in’ with sustainability was made after the hosting of the Super Bowl last year.

Vogel explains that ahead of the flagship game, the NFL approach the stadium operators about developing a robust sustainability programme, with both finally agreeing to aim for the ambitious target of going zero waste to landfill.

“We ended up hitting zero waste and we got a lot of positive PR for the stadium,” Vogel tells The Sustainability Report. “It got a lot of news stories and became a key piece of the news cycle around the game, so that really got the wheel turning.”

Since hosting the game, Vikings leadership didn’t look at sustainability from an environmental standpoint but as a “smart, competitive thing to do”. “If we show people we’re sustainable, maybe we can get more business,” he adds.

After the Super Bowl, Vogel and the rest of the stadium operations team began to focus on other aspects related to sustainability, such as water, energy and human experience. But waste management remained a key part of the strategy.

“That’s probably where we’ve had the biggest operational push,” Vogel explains, adding that the stadium has really ramped up on its composing operations over the 18 months since the Super Bowl. Pushing the stadium’s concessionaires to provide packaging for food and beverages that is compostable and recyclable has been helped by the fact that the city of Minneapolis and the wider county has developed a number of requirements around environmentally-friendly products.

The franchise has partnered with Republic Services to transfer all of its compostable waste to a special facility, although much of the work has to be done on site following a game. Because composting only allows for a small contamination rate, Vikings employees spend three days going through game day waste (around 30 tonnes) to make sure it ends up in the right stream (below).

Trying to get fans on board and use the correct waste bins has been a “steep learning curve” Vogel admits, but that’s where much of the effort is now being concentrated.

Energy can be broken down into four categories: gas (for cooking), chilled water (for air conditioning), steam (for heating) and electricity.

In terms of the later, Vogel has been leading a project to retrofit the stadium with LED light bulbs. He has also implemented some “strict lighting policies” throughout the stadium.

“If something’s not in use, we turn it off,” Vogel says. “As easy as that sounds, that’s something that was not being done in the first one or two years of operation. We’ve been doing the same with refrigerators and coolers.”

Keeping the stadium warm during the winter without using too much energy has not been that challenging, Vogel reveals, as the venue’s south facing roof – made out of ETFE plastic – creates a greenhouse effect. However, keeping the facility cool during the summer has proven to be an issue. To cut down on energy use, the stadium has moved from using one major air conditioning unit to installing smaller ones in specific areas..

In their quest to achieve LEED Platinum, the team used a digital platform called Arc, which monitors sustainability progress in real time, updating the venue’s performance from month to month based on water use, energy efficiency, waste management and other sustainability aspects.

On top of that, Arc also measures and monitors how the stadium impacts the wellbeing of the people occupying it. To satisfy the human experience element, the Vikings installed an air purification system called AtmosAir that ionises the air by pulling heavy particles to the ground quicker and lowering the concentration of volatile organic compounds.

“The stadium was designed and built to be run at a LEED Platinum level,” says Vogel. “HKS (the architect) and Thornton Tomasetti (the structural engineer) designed it to be very efficient. All we really had to do was enhance those aspects and make sure they were being run properly.”

Because of the changes made by Vogel and the team, US Bank Stadium comfortably achieved LEED Platinum status with 86 points – six points above the score needed to achieve the highest certification.

“Around the middle of the season we started talking about LEED Platinum, but to begin with we weren’t sure if LEED Platinum was a possibility,” Vogel admits. “We knew we could get close but when we got our score we were blown away by how high it was.”

US Bank Stadium also became the first stadium to receive Bike Friendly Business certification as a result of supplying 180 bike racks for fans. According to Vogel, the energy efficiency projects also contributed to large cost savings.

“We’ve been able to cut our electricity bill by around 25%, which for us is in the hundreds of thousands of dollars,” he says. “We’ve also cut our air conditioning bill by around 20-30% in the last year. We’ve really been able to frame these sustainability arguments as and economic argument – not so much in terms of carbon footprint reduction, but saving dollars.”

But for Vogel there is still some work to be done until he is totally content with the sustainability credentials of the building. Over the next year the Minnesota Vikings will explore the possibility of integrating a renewable energy generation system on site in the form of solar panels, and reducing the amount of waste further is still a priority.

“We want to work with other sports facilities to create a demand for environmentally-friendly packaging,” Vogel explains. “If we can come to together and say this is what we want from our suppliers, we can hopefully get them to change their ways.”

He adds: “We’re looking into potentially moving to a reusable cup system to see if we can phase out single-use plastic cups for beer and soda. Even with LEED Platinum we’re not 100% as good as we could be. There’s still a lot of room for improvement and nothing is off the table.”