Bridging the education gap: How sports teams are engaging kids in science, maths and technology 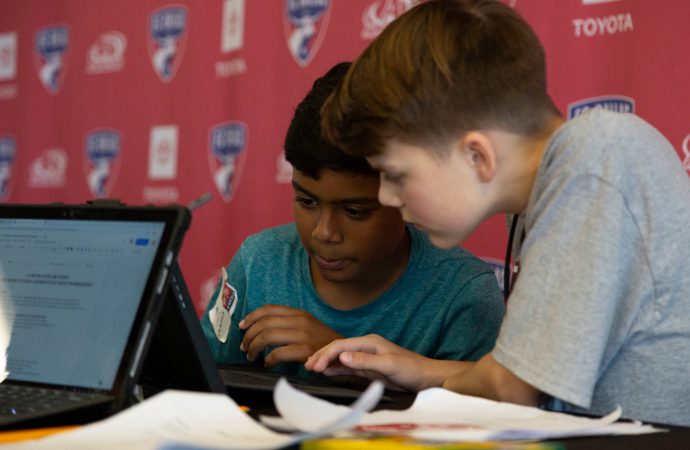 A chasm is emerging between what students know and what they need to know to solve local and global issues. But a handful of professional clubs are using STEAM education to address this

Monday 19 August, 2019. Back to school day in North Texas. It’s fitting, then, that today should be the day that The Sustainability Report sits down with Brooke Leverette and Gina Miller of FC Dallas to discuss the MLS franchise’s new flagship education programme: STEAM FC.

Launching next month, STEAM FC has been designed to engage local children in science, technology, engineering, art and mathematics through the medium of soccer. The ambition in the first school year is to reach all 6,000 six graders (11 to 12 year-olds) in the Frisco area, before expanding across the whole Dallas and Fort Worth region in subsequent years.

“The principles of STEAM align with one of the pillars of the FC Dallas Foundation, which is education through sport. Soccer, of course, in our particular case,” says Miller, the club’s vice president of media and communication. “We really saw within the independent school district in Frisco is this need to deliver some teaching principles that were unique, resonant and engaging for these young kids.”

STEAM FC is being backed by Frisco Independent School District (ISD), which sees the programme as a complement to the existing school curriculum, while NEC, the technology company that created much of the technology for the National Soccer Hall of Fame (which can be found in FC Dallas’ Toyota Stadium), has helped to fund it.

“We have our Movement Lab, which gets kids active but also relates some of the things they’re doing back to science, maths and physics. Our National Soccer Hall of Fame is one of the most personalised experiences in the whole of sport and we’ll be teaching the kids about the tech that drives that, while the stadium tour will highlight parts of the facility that relate back to STEAM concepts.”

One of Leverette’s priorities is to fulfill the FC Dallas Foundation’s mission – to positively impact the health and wellbeing of underserved youth through sport – by providing the programme for the children who wouldn’t ordinarily have access to such learning opportunities.

According to Scott Carlin, the co-chair of the International Day of Education for Global Citizenship and associate professor at Long Island University, low income communities are less likely to have the resources to establish STEM or STEAM programmes without financial backing from the private sector. And while STEM education is becoming more widespread, STEAM is only about “5% the level of adoption of STEM” in the US.

The difference between the two concepts is the former’s incorporation of the arts to complement the science, technology, engineering and maths elements of the latter.

“The artistic perspective helps with creativity and critical thinking,” adds Eunhee Jung, who is co-chair of the International Day of Education for Global Citizenship alongside Carlin and founder of International Virtual Schooling. “When we lose these elements some of the solutions are not value-orientated, but mechanical.

“STEAM education is important for the attainment of the Sustainable Development Goals (SDGs). Mainstream education is knowledge-based and test-based and not linked to impact on the community. STEAM is about synchronising what happens in the classroom to the needs of the community. It’s about collaboration, civic engagement, creativity and compassion.”

Both STEM and STEAM education are becoming increasingly important in the context of achieving major objectives – locally and globally. To tackle huge existential issues like climate change, for example, we have to rely on the best scientists, engineers and critical thinkers to come up with the solutions. However, there is an education gap emerging; only 16% of college students in the US graduated in STEM subjects, and although the number of jobs in this area is growing, the number of people able to fill those vacancies is not.

That gap is even greater if you come from an underrepresented or minority background. A 2015 National Science Foundation report found that of the people working in STEM roles in the US, 18% were white women, 4% were Asian men, 7% were Asian women, 3% were black men and 2% were black women, while 49% were white men.

Underserved communities and those kids from disadvantaged backgrounds are at the centre of the STEAM programme devised by Jesse Lovejoy at the San Francisco 49ers. The most developed STEAM programme in professional sport, the NFL franchise’s foundation serves 60,000 kids a year as part of its 49ers EDU project.

“When you talk about STEAM education, you’re talking about a workforce issue, you’re talking about an economy issue, a gender issue,” the director of 49ers EDU tells The Sustainability Report. “You’re talking about things that are really, really important systematically for our country and our community. We are very serious about teaching kids these subjects because they matter to them and what they’re going to end up studying.”

He adds: “In my opinion, there is not one domestic or global problem that cannot be solved by having kids more interested in STEAM – and I’m putting societal issues into that category, too. If kids learn more about themselves and become more confident in their ability to solve problems and think creatively and critically, they will be better prepared to chase whatever dream they want to chase.”

There’s a gap, he says, between what kids currently know and what they need to know in order to be successful and tackle some of the issues facing their communities. Lovejoy explains that programmes like 49er EDU can work alongside traditional schooling, mentorship initiatives and internships in Silicon Valley and beyond to give students the rounded education they need.

But starting children on this path as early as possible is critical. STEAM programmes are offered by the 49ers from kindergarten age, all the way up to grade six. “If by the age of 10, 11, 12 kids have not developed an interest in science and math, then it is generally not going to happen,” says Lovejoy.

The commitment to education, says Lovejoy, comes straight from the team’s owners – the York family – who have hired five full-time teachers to deliver STEAM lessons from an extensive curriculum. There are four classrooms within its recently-constructed Levi’s Stadium and the team spends $800,000 per year to transport kids to the stadium and to run the programme.

In fact, the workings of the Levi’s Stadium is at the core of the STEAM programme as opposed to the sport of American football – particularly the sustainability features that won it LEED Gold certification from the US Green Buildings Council.

“We have lessons related to the building about reclaiming water, about solar energy, about recycled materials, about public transport,” Lovejoy explains. “Environmental sustainability is actually one of our more popular categories because it’s very relatable to kids and it’s easily articulated through the building.”

Earlier this year, the 49er partnered with Benfica, the most successful professional soccer club in Portugal, on a strategic partnership that will see the two teams share knowledge on sporting, technological and business operations. Working on a STEAM programme for the latter is one of the proposed objectives.

Indeed, Lovejoy is the common thread among many, if not all, of the STEAM programmes occurring in professional sport. He supported FC Dallas in getting its fledgling programme off the ground and has taken his knowledge across the pond to sports brands like Chelsea FC, where he has developed a strong relationship with the 2012 UEFA Champions League winner’s head of education and innovation, Matt Mead.

The pair met at a Beyond Sport Sport and STEM Alliance event at Levi’s Stadium and “hit it off” over their love of sport, education and technology. Chelsea’s foundation is one of the most respected in Europe, with 90 full-time staff – 16 of which work in Mead’s education department. Shortly after meeting, Mead and Lovejoy decided to host a two-day event in London with NFL UK to teach children about the material science of American football compared with soccer, such as the difference between cleats and boots.

“Three weeks later we went out and did a business enterprise hack with around 70 kids from Silicon Valley and asked them to develop a plan to encourage non-American football fans to come to a 49ers game – how they could incentivise them and make the prospect appealing,” says Mead. “We had about 20 volunteers from the Bay Area and SAP to support with their industry and career knowledge. And I can tell you the world is in good hands with these kids – they’re really smart.”

Since joining Chelsea in 2013, Mead has been busy building up the club’s own STEM programme, aptly named Digital Blue.

The programme is made up of four main components: a design an engineering element in partnership with Autodesk, that helps kids use Fusion 360 to design Nike football boots; a project with Tinkercad that allows students to design their own stadium; robot football that teaches students how to code; and an online learning platform developed with Everfi.

The latter, which was launched in New York in October 2018, gives students the chance to learn about STEM careers at Chelsea, such as the work done by groundspeople and match analysis professionals, through filmed footage. During its first year, 43 schools opted into the programme bringing the content to more than 10,000 children.

“We’re engaging kids of 10 and 11 – a long way from their professional careers – but you’re never too young for technology,” Mead explains. “Can we expose kids to things they didn’t know exist at that age? Most have no idea that they can code a robot on an iPad and play football at the same time. Most have no idea they can design a stadium.

“Hopefully, when these kids get home rather than firing up the Xbox they’ll fire up Google and download some Autodesk software, which is free for under-18s, and start developing skills. It’s about giving these kids exposure that they might not get at home or at school and showing them these critical skills are really needed. If they’re not working on these skills at this age, the digital intelligence gap will get larger and larger.”

Mead is hoping to use the experience and knowledge he’s gathered since developing Digital Blue to encourage and support other major European soccer clubs to establish similar projects. Earlier this year the former head of education at Brighton & Hove Albion helped 15-time Eredivisie champion Feyenoord kick off its own STEM programme, with the pair hosting a STEM Network event next month at Chelsea’s home stadium, Stamford Bridge.

“We’re by no means stopping on this journey,” says Mead. “We’re hoping to work with four or five clubs this year across Europe to help them build their own journey. Then that scales because they will start working with thousands of kids in Barcelona or Rotterdam or Paris. It’s nice to see the programme we’ve created impact other communities. I’d love to see it go global.”

How else can professional sports teams contribute to the education systems in their local communities? Let us know in the comments below.