Has sustainability given Forest Green Rovers a competitive edge on the pitch? 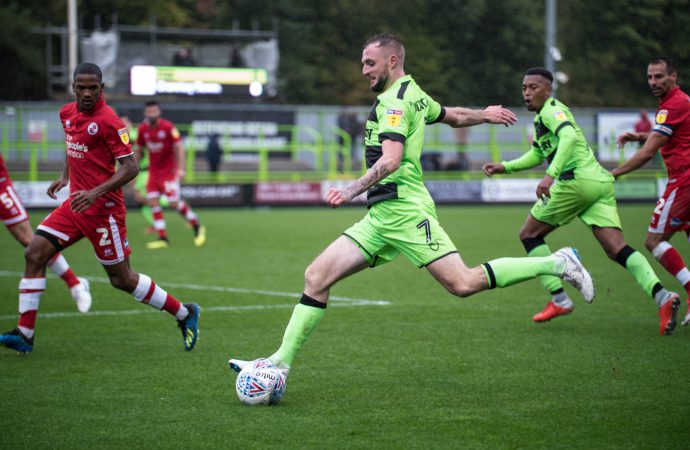 Key figures from within the club discuss vegan diets, unique club culture and a growing international fanbase – and how it all contributes to winning football matches

At the start of the decade, Forest Green Rovers received its second reprieve from relegation in six years due to other teams in the league failing to adhere to financial regulations. Although the club had been in the Conference National, the fifth tier of English football now known as the National League, for over a decade, it was regularly flirting with demotion to the lower reaches of the football pyramid.

Ten of the 12 campaigns between 1999 and 2010 in the Conference National saw Forest Green finish in the bottom half of the table. Its only remarkable achievement during that period was a run to the third round of the FA Cup.

Then, Dale Vince entered the fray.

After establishing his renewable energy company, Ecotricity, in the nearby town of Stroud in 1995, Vince gradually became involved with the club. First, he was encouraged to invest in the club. Then, he became its majority shareholder in 2010 before being appointed chairman shortly after. It was the beginning of a sustainability revolution that transformed Forest Green Rovers into the ‘greenest’ football club in the world.

The installation of solar panels and rainwater collection barrels came first, followed by investments in a solar powered lawn mower, an organic pitch and, most recently, charging points for electric cars and digital matchday programmes.

Despite a mixed first season with Vince at the helm, Forest Green Rovers’ on-field performance improved markedly over the last decade. From 2011/12 onwards, the team finished in the top 10 of the National League every season until 2016/17 when it achieved promotion to the English Football League.

Last season, the club almost went up again to League One, the third tier of English league football, but fell short at the playoff semi-final stage.

It’s fair to say that Vince’s arrival at Forest Green allowed the club to loosen the purse strings when it came to attracting new players. After all, with a net worth of more than £100m, Vince is among the richest club owners in the English football league.

A recent study claimed that during the 2017/18 season, Forest Green Rovers had the seventh highest wage budget in League Two (out of 24 teams), which has to be factored in when analysing the team’s consistent year-on-year improvement. But how much of the club’s on-field success can be attributed to its unique environmental philosophy?

In 2015, the club removed all meat and dairy products from its matchday menu and was recognised by The Vegan Society two years later as the world’s first fully vegan football club. Consequently, all food consumed by players on site must be vegan. They are not obliged to follow this diet in their home lives, though it is gently encouraged by the club’s management.

Talking to The Sustainability Report, Vince (below) is unambiguous in his assertion that such a policy has been a major factor in the club’s stellar form over recent years.

“I think the vegan diet is a performance boost. I’m convinced of it. When we won the National League playoff final, we played 50 games and we had zero soft tissue injuries throughout the entire season,” he explains. “Our opponents that day had roughly eight, which would have been a factor for them, certainly.”

Several athletes plying their trade at the top end of the game share Vince’s beliefs. Four-time Premier League champion Sergio Agüero, Fabian Delph, who has 20 caps for England, and Arsenal’s Hector Bellerín are just three of the footballers who are either fully vegan or adhere to a vegan diet during the playing season.

On his YouTube channel, the latter spoke highly of the regime saying that veganism has improved his recovery from exercise.

“The most important thing for me is the speed at which my body recovers compared to before,” said Bellerín. “I always had problems with my ankles. They would get inflamed and be very stiff, but now I don’t need to strap them any more.”

While the anecdotal, experience-based evidence lends credence to Vince’s theory, there is limited academic research into this area currently. One academic paper from 2017 written by David Rogerson asserts that plant-based protein powders are effective at improving recovery from training, but scientifically, the field is lacking in-depth research.

Another study undertaken by Kloubec and Harris (2016) indicates that while meat and dairy do not need to be completely cut from a diet, focusing on whole foods and complementing them with lean meats is a good solution.

Mark Cooper, the first team manager, recognises the lack of data on the topic, but has seen enough first hand to be convinced of the diet’s benefits.

“We’ve seen an improvement in our injury record and lowering total injuries sustained,” he says. “You have to look at [the vegan diet] and say it could be that. There’s no cast iron information either way, but we look at it in terms of players’ recovery from games and the soft tissue injury and we’ve had very few ultimately.”

For now, the lack of academic evidence might be helping Forest Green carve out a competitive advantage against teams who have not embraced veganism as a dietary policy – particularly over the course of a long 46-match season.

Teams that sustain fewer injuries are usually set up best for long-term success. One of the hallmarks of Leicester City’s fairytale Premier League win in 2016 was that the team had the fewest injuries, and the fewest days lost to injury, over the course of the season. This led to continuity – to the extent that the team used the fewest players in the league that season – which bred familiarity and consistency.

Having a single international fan club is a proud achievement for any team outside of Europe’s elite. It’s understandable, then, that many clubs in England are envious of Forest Green’s increasing global reach.

Of the fan groups dedicated to following the fortunes of the Gloucestershire-based side, around 20 can be found in nations outside of England. Most recently, a group of Russian fans contacted the club via Facebook to pledge its support.

And when the team’s new kit for the 2019/20 season was released, more evidence of Forest Green’s international support became apparent. Within 24 hours, online orders had come in from 16 different countries, including Australia, South Korea and Malaysia. It’s blue third kit, from which all the profits go towards marine conservation charity Sea Shepherd, sold out recently, forcing would-be buyers to wait for restock.

This season’s kit (below) has been manufactured from 50% bamboo in an effort to reduce plastic consumption, only serving to increase the club’s popularity among sustainability and conservation enthusiasts.

For a team competing in England’s fourth division this level of global attention is unheard of. Considering the fact that the team is based in a village with a population of 7,000 people makes the story barely within the realms of comprehension. But such is their worldwide following that Forest Green Rovers must now find a way to cater to these far-flung fans.

And so, the club launched FGR Live, a new streaming service aimed at international fans. To watch every league game of Forest Green Rovers’ campaign, fans abroad can pay £130 (or under £3 per match) and receive live streaming alongside synchronised commentary from BBC Radio Gloucestershire.

Many of the players in the division would normally expect to turn out in front of a couple of thousand locals at most, but knowing that they have an international audience can push Forest Green’s players to the “next level mentally”, according to new signing Matt Mills.

“If you know that you’ve got people who have come, or watch you, from other parts of the world it can only motivate you to play well and impress them,” Mills adds.

Vince sees this increasing exposure and positivity around the club as a massive boost for the club’s future on the pitch.

“It’s hard to say to what degree the off-field affects the on-field,” he muses. “But the positivity around the club and our message in the media adds up to us looking like a progressive club. Players want to come to progressive, ambitious clubs.”

Mills is approaching the twilight of his career, having turned 33 in July, but he is a prime example of a player that the club might not have attracted if not for its culture. The defender has spent 11 of the last 12 seasons playing in the second tier of English football, but, following a short stint abroad, skipped down to the fourth tier to join the exciting project in the Cotswolds.

While it’s true to say that playing alongside his younger brother may have been an extra incentive to join (Joseph Mills also plies his trade at The New Lawn), Mills senior insists that the club has its own unique appeal for players with a certain mentality.

“The interesting thing for me is that the whole package creates a culture,” he explains. “Coming in as a player, the identity is so strong, from the owner, to the manager, to the players. It definitely has a unique feel (compared) to any football club I’ve been at.”

Mills’s comments are indicative of what appears to come for this team in the future. If the club culture genuinely helps Forest Green attract better quality players, its on-field performance should improve and as a consequence progressions through the leagues should be a distinct possibility.

Vince himself has set ambitious goals for the club since day one and is now seeing them gradually come to fruition. As always for him, the football results go hand in hand with the progress in sustainability.

“Our target on the field is to reach the Championship (the division below the Premier League) currently,” he says. “Every league we go up, our platform becomes bigger. We want to properly communicate about sustainability within sport.”

How else can a focus on sustainability impact on-field performance? Let us know in the comments below.