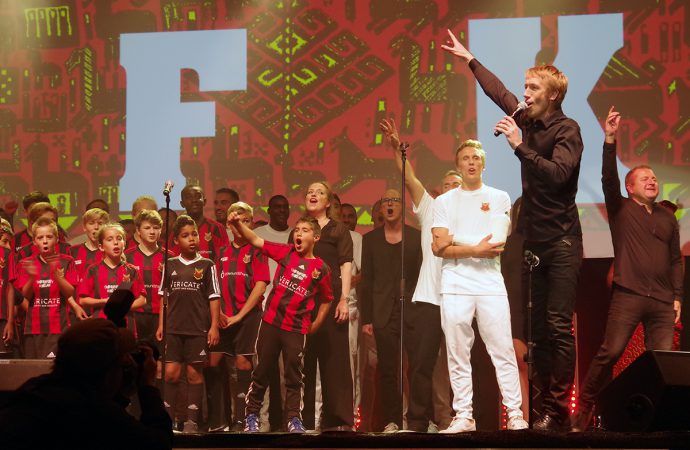 After suffering the ignominy of relegation in 2010, Swedish football club Östersunds FK adopted an unconventional new model to turn its fortunes around. Less than a decade later, the results have been extraordinary

From unremarkable beginnings, Östersunds FK’s ascent from the lower echelons of Swedish football to competing with some of the world’s biggest sides in European competition has been anything but. The scale of the success enjoyed by the club in a relatively short period of time has garnered praise and recognition way beyond the confines of the small city of 50,000 inhabitants in central Sweden it calls home.

Many observers have attributed Östersunds’ considerable on-field achievements to the establishment of its radical Culture Academy, and while the Academy’s conception in 2012 has coincided with the club’s purple patch, it was a period of failure at the beginning of the decade that served as the catalyst for adopting this revolutionary initiative, as club secretary Lasse Landin explains.

“In 2010, we were playing in Division 1 North [third tier], which is the equivalent of League One in England,” he says. “We signed a couple of players from Great Britain, which we hoped would help us get promoted to the Superetten [second tier]. But instead we went down to Division 2 [fourth tier], or League Two in England. Of course, that was a big failure. The club was shaken; most people on the board resigned, and a lot of players left too.”

This major setback prompted Landin and the remaining board members to sit down and come up with an ambitious new strategy to get Östersunds to the Allsvenskan [top tier] and eventually qualify for Europe.

Acknowledging that Östersunds would never be able to compete on a financial level with the traditional heavyweights of Swedish football, they devised a bold and unorthodox plan to establish a Culture Academy at the club. This Academy would work with players and staff in areas outside their comfort zones (music, theatre, ballet), help them develop as human beings and, ultimately, improve the team’s chances of victory on the pitch.

After bringing on board Landin’s daughter Karin Wahlen – the owner of an artistic company in Stockholm who would later become Östersunds’ specialist culture coach – they presented their vision to the club’s then-chairman Daniel Kindberg who, along with head coach Graham Potter, embraced the idea enthusiastically. The Culture Academy was born.

From the outset, universality has been at the heart of the Culture Academy ethos. Everyone employed by the club – from the players and coaches to the admin staff working in the offices – are required to take part in cultural activities. So important to Östersunds’ philosophy is the Academy that funds were initially diverted from some of its other departments to get the programme up and running, with the head coach himself assessing the sessions as the season progresses.

“At first, all new players and staff are apprehensive of what we do because it’s a new experience for them,” explains Landin. “It’s about doing things you’re not used to doing. No other club has done this type of thing before, so everyone starts off like a little child – they have to learn to crawl first, then walk and finally perform.”

Since the Swedish football season runs from spring until autumn, a meeting is held at the start of every year involving all of Östersunds’ staff during which the cultural project for the forthcoming season is announced. It is then Wahlen’s responsibility to organise the Academy’s activities throughout the year – the club averages one cultural ‘training’ session a week, including added activities during international breaks.

This all culminates in mid-November with a final performance or exhibition. In 2018, players and staff staged a musical by working with a theatre group for people with special needs, and this year they will delve into the history of the region, again through the medium of theatre and musicals.

No matter the type of performance, the overarching theme remains the same each year: building a better society and teaching players and staff how to help other people. And in order to put on a show to remember, the club hires trained experts to coach in the Academy, guiding the participants through the project and helping them to develop their self-confidence – something that stands the players in good stead on matchdays.

“Every year we take help from professionals,” says Landin. “When we ran our dance project, for example, we enlisted the help of a trained ballet dancer. In the beginning, everyone is nervous, but by the end when we have been successful, everyone is happy.

“It’s like winning the UEFA Champions League. It’s a feeling we can bring to the football pitch, the office or any other work environment at the club. We believe that with this attitude, we can win more matches than other teams just by having this feeling that we can do the impossible.”

It hasn’t all been plain sailing for Östersunds along the way. Potter – who was so instrumental in both the creation of the Culture Academy and the club’s phenomenal success in his role as head coach – has since moved on to manage English Premier League side Brighton & Hove Albion via a season-long stint at Swansea City. Meanwhile, Kindberg recently stepped down from his role as chairman having been accused of financial criminality involving taxpayers’ money (Kindberg, who denies the charges, is scheduled to appear in court in October).

The club itself is not on trial, of course, and Landin is insistent that the absence of these two men will have no bearing on the good work carried out by the Culture Academy, which he is confident has had a positive effect on the team’s results and will continue to do so. Judging by Östersunds’ track record since the Academy was formed – two promotions, a Swedish Cup triumph and reaching the knockout stages of the UEFA Europa League – this is hard to dispute.

“In football, you have to be brave and know how to think and how others are thinking, including both your own teammates and the opposition,” he says. “The Academy is one way of making the players and staff braver and more creative, which in turn will make them better at decision-making.

“If our Academy makes us three or four percent better on the pitch, in the end it means we will have won a certain number of extra games because we know how to work with people and how to help them become better human beings.”

Putting to one side the footballing benefits reaped from the Academy, Östersunds’ pioneering enterprise has inevitably attracted significant media attention from all over the world, which in turn has made it easier for the club to secure financial backing.

Another positive consequence of the scheme has been a swelling of Östersunds’ female fanbase; according to Landin, nearly a third of its supporters are now women, with many of them becoming interested in football after learning about the Culture Academy.

The past eight years have seen Östersunds enjoy arguably the greatest period in its history, much of which can be attributed to its trailblazing Culture Academy. Despite this, Landin has no desire to see the golden age come to an end anytime soon; for him, the hard work and the striving for progress never stops. It has always been the way for this small, unconventional and truly remarkable football club.

“We have to be better prepared every year to improve and to learn more from our own mistakes,” he concludes. “It’s a bit like taking care of your family or your house; if you don’t work on it every day, then you’ll get divorced from your wife, or your house will fall apart. You can’t stand still and just say ‘Okay, now we are finished’. You have to do it over and over again.”