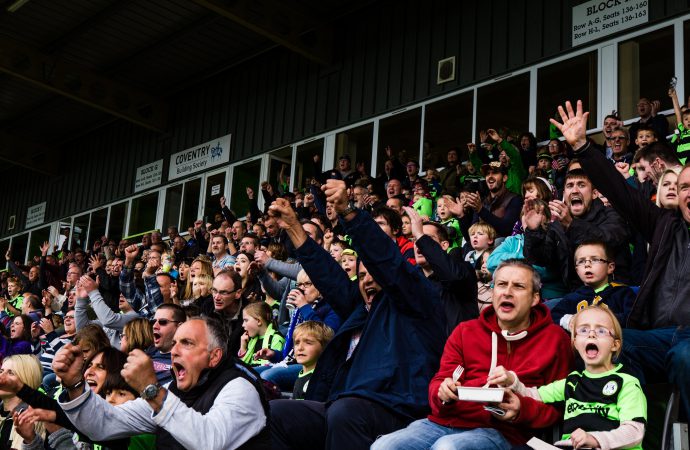 League Two football club, Forest Green Rovers, will compensate for the carbon emissions generated by all fans travelling to its New Lawn stadium this season – and those fans attending away matches – by building an offset into every ticket.

The club was declared the first carbon neutral professional sports organisations by the United Nations last year after committing to compensate for its 200 tonnes of unavoidable emissions by investing in UNFCCC-certified sustainable development projects.

By including fans in the initiative, Forest Green has made itself responsible for the carbon footprint of thousands of traveling supporters. During the 2018/19 season, the club had an average attendance of around 2,700 fans.

However, chairman Dale Vince said that the scheme was only an “interim step” to address the issue until the club finds a way to actually reduce the carbon footprint of its fans.

“It’s a way to tackle emissions linked to transport before we can tackle it in a better way,” he told The Sustainability Report. “We can’t get an electric bus for away travel and we can’t really control how fans come here. But we want to communicate the importance of the issue.

“So in the interim, we’ve said ‘let’s build a carbon offset into every ticket’ so that every fan that gets here will have done so in a carbon neutral way.”

Emissions will be calculated by the club through analysing distances travelled by supporters and the methods of transport they’re using.

The scheme was revealed during a wide-ranging media day, in which the club unveiled a special edition kit (with all proceeds going towards marine conservation organisation Sea Shepherd) while Vince provided an update on plans to build a new stadium after the local government rejected its initial proposal last month.

Of the latter, the chairman – who is the founder of renewable energy company Ecotricity – said the decision was a “Brexit-style shock” and that the club should find out the decision of its appeal in September or October.

While Forest Green has transformed the New Lawn into one of the most sustainable sports venues in the world – with solar panels, an organic pitch, rainwater collection and electric car charging points – Vince (pictured above) said its plan for a new all-timber stadium and surrounding Eco Park complex would be a “big opportunity” and a “blank sheet of paper”.

A third kit manufactured with a material using 50% bamboo was presented. All proceeds from kit sales will be donated to Sea Shepherd, which safeguards marine biodiversity by investigating, documenting and taking action in the face of harmful illegal activity on the high seas. Vince is a patron of the organisation and the kit will be worn by the team during cup matches throughout the season.

Vince also revealed that Forest Green will launch a service to stream all of its matches for its growing international fanbase.

The club has fan groups in around 20 countries, from the US and South America, to Germany and the Nordic countries. Indeed, when the club released its new home shirt earlier this month (also manufactured using bamboo) it was sold in 16 different countries “including South Korea, Malaysia, Hong Kong and Australia” within the first 24 hours.

“What I think we’ve created is a new kind of football fan,” Vince explained. “People that get the environment and they may be interested in football too, to a degree. Some are, and some are less so. This is exactly what we want to achieve. We want to get people engaged in the issue of sustainability in sport.

“We’ve started to refer to them as our ‘crowd in the cloud’. And it’s about enabling them to engage with the club from where they are.”