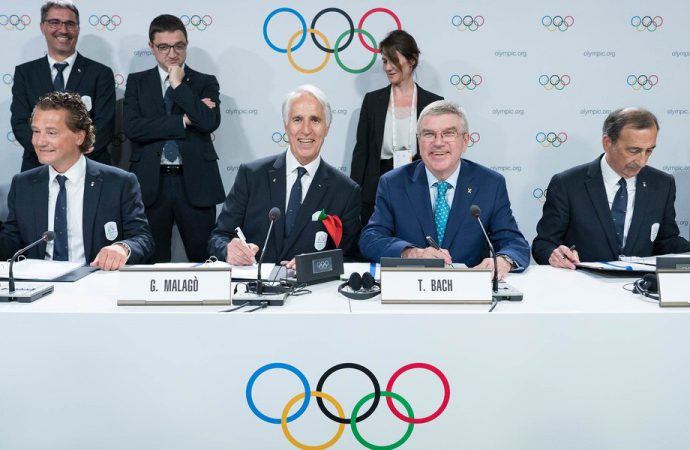 Milan and Cortina d’Ampezzo’s pledge to host the “most sustainable” Winter Olympics ever will be put to the test after the Italian cities secured the 2026 Games at the expense of Stockholm and Åre.

Ahead of the vote, the IOC’s Evaluation Commission Report acknowledged that the Italian bid had met all of the criteria, highlighting its “clear vision” to align the Games with long-term development goals for the region.

Thomas Bach, president of the IOC, said that the new candidature process has “demonstrated the success of Olympic Agenda 2020” – the body’s strategic roadmap, that includes sustainability as one of its three key pillars.

“We have lowered the cost and complexity of developing the Games project, which now serves the long-term development goals of the host communities and have sustainability and legacy at their hearts,” he added.

Indeed, the total budget for the Games ($1.5bn) is significantly lower than the estimated $3.9bn needed to host the 2022 edition of the multi-sports event in Beijing. Much of the projected savings will be down to the fact that 13 of the 14 venues proposed for the Games have already been built.

Now that the bid has been won, Milan/Cortina will coordinate a Sustainability and Legacy Forum to deliver on the pledges set out in the bid book. The host’s sustainability and legacy goals can be broken down into three main areas.

Firstly – and in accordance with the new Host City Contract criteria – Milan/Cortina has made a number of commitments related to the actual delivery of the Games.

While 93% of infrastructure exists already, any new permanent buildings or infrastructure related to the event will likely be constructed in accordance with LEED and EnvisionTM certification. Products, services and materials needed to deliver the Games will also go through a ‘green procurement’ process, in line with the ‘Minimum Environmental Criteria’ devised by the Italian Ministry of Environment.

Of particular concern is the way that wood will be sourced – especially in light of the issues experienced ahead of Tokyo 2020, where the organising committee had to review its timber source code when it came to light that a proportion of wood had been sourced from high-risk rainforests.

All wood used will be FSC (Forest Stewardship Council) and PEFC (Programme for the Endorsement of Forest Certification) certified. The organising committee plans to maximise recycled and renewable materials when constructing permanent or temporary venues.

All suppliers will have to adhere to Green & Social Procurement Guidelines – a set of specifications about “preferred green and sustainable characteristics” of services and products, including construction materials, food and beverages, merchandising, logistics, and security services.

There will be a 100% ban on food and beverage single-use plastics. By 2026, that target should be eminently achievable; a European Union ban on selected single-use plastics will be in force well ahead of the Games (the plan is to reduce 70% by 2030), meaning that appropriate alternatives should be mainstream by the time the opening ceremony rolls around.

All water jugs, tableware and tablecloths must either be washable or 100% biodegradable (meeting the EN 13432 standard so that they can be sent to composting-digesting centres) while water stations will be installed at all venues, encouraging the use of reusable bottles and cups.

Milan/Cortina will also seek the help of nonprofit organisations to make sure 100% of unused food is recovered.

The second main area focuses on wider challenges that extend well beyond Milan, Cortina and their surrounding regions: mobility, workforce and climate.

It would be an understatement to call the latter a pressing subject for the region. Some studies have projected that the Alps could lose up to 70% of its yearly snow cover if climate change continues on its current trajectory, meaning catastrophe for northern Italy’s skiing industry – an industry worth around $10bn.

As part of its bid pledges, Milan/Cortina will set up “ambitious carbon management plans” with the objective of making the Games a “carbon-neutral event”. Milan as a city has revealed plans to plant three million trees – increasing the number between 17 and 20% – to combat climate change, while the bid book stresses that Italy’s Lombardia and Veneto regions “share a strong commitment” to tackling climate change.

Working off the methodology applied by 100 Resilient Cities (the climate change mitigation organisation financed by The Rockefeller Foundation), Milan/Cortina will develop a risk analysis on climate change trends affecting communities involved in the Games.

Milan, according to 100 Resilient Cities, has the potential to be most affected by environmental degradation, extreme heat and rainfall flooding.

Aligning the Winter Olympics with long-term sustainable development goals will perhaps be the most challenging endeavor. The IOC’s Evaluation Commission expressed its happiness with the ambition of some of the targets, even stating that some of the more wide-ranging objectives were even a little too ambitious.

The flagship objective is for the Games to help influence all children born after 2010 to play sport regularly, recycle 75% of the waste they produce, only use sustainable means of transport, use sport as a means of understanding cultural diversity, and contribute to a more inclusive and integrated society.

Getting young people involved in sport is a big challenge for Italy. According to the World Health Organization, only 11% of 11-15 year-olds were undertaking a sufficient amount of physical activity, suggesting that a significant shift in behaviour change will be needed to attract keep the whole youth population in sport.

The other targets also face obstacles; increasing the rate of recycling and sustainable transit will require a big infrastructure investment from the Italian government despite low economic growth. In terms of the latter, Milan expects 50% of its bus fleet to be all electric by the time the Games comes around and 100% four years later.

Italy’s hard-line immigration stance, adopted since the election of far-right interior minister Matteo Salvini, may also pose a problem to the ambitions around understanding cultural diversity and providing a more inclusive and integrated society.

A portion of the host’s $120m corporate administration and legacy funding will be provided for environmental and social programmes. Additional funding from the private sector will be sought to help fund legacy and sustainable development programmes, which may be helped by the bid’s alignment with larger projects occurring in the region.

The largest of which, Milan’s 2030 Urban Development Plan, proposes the development of seven abandoned railway yards into ‘environmental regeneration areas’ with housing and other community services (increasing affordable housing is another of Milan’s main challenges). The ultimate vision is to transform the nation’s largest metropolitan hub into a “green, liveable, resilient” city.

It is also expected that the Games will benefit from (and support) Lombardia’s €1bn Regional Development Programme that has priorities around smart energy management, sustainable urban mobility, and economic and social regeneration.

Following the announcement of Milan/Cortina’s triumph, Italian prime minister Giuseppe Conte tweeted: “We are proud of this great achievement! Italy has won: an entire country that has worked together and compact with the ambition to realise and offer the world a ‘memorable’ sporting event.”

Time (as well as planning, budgeting and execution) will tell if the Games will offer Milan, Cortina, the surrounding region – and Italy in general – a more sustainable future as well as a memorable sporting experience. Those who devised the IOC’s Agenda 2020, the New Norm and recent iteration of the Host City Contract will be crossing their fingers, as will those who voted in favour of the bid over Stockholm/Åre’s equally ambitious sustainable development plan.

What does the Milan/Cortina organising committee have to do to truly align the Games with large-scale sustainable development goals? How big a part can a sports event – no matter how high-profile – play? Let us know in the comments below.