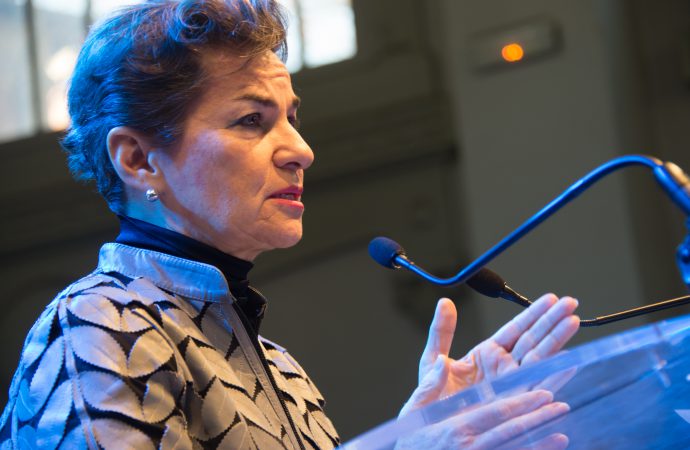 The IOC must become more radical in its approach to addressing climate change in order to secure the future of the Olympic Games, according to the former executive secretary of the UNFCCC.

Talking at the 134th IOC Session, in which the organisation celebrated the 125th anniversary of the modern Olympics, Christiana Figueres said that both the Summer and Winter Games were facing “existential threat”, and that while the IOC had achieved a number of impressive sustainability targets, more needed to be done.

“The fact is, my friends, the changes in the conditions upon which the Summer and Winter Olympic Games depends used to happen in geological times. That is no longer the case. These changes are happening within short decades – certainly within our lifetimes,” she said.

During the rousing address, Figueres – who was instrumental in the creation of the Paris Agreement – highlighted the threat posed by man-made climate change, with projections that some Himalian glaciers will be gone by 2035 with glaciers in Europe and South America close behind.

The decreasing amount of snow falling every year would, at the very least, make the Winter Olympics a more expensive event to host as “no one can produce snow cheaper than mother nature”, while the rise in ambient temperatures for Summer Games events will make conditions dangerous for both athletes and spectators.

Thinking about the challenge in global and local terms was reference by the diplomat as “the sweet spot” that the IOC could address. The burning of fossil fuels, she reasoned, was responsible for both global warming (a global issue) and poor air quality (a local issue).

She asked the IOC to use its influence to encourage host cities to stop burning fossil fuels for a time period ahead of the Games (like Beijing did in 2008) with a view to becoming carbon neutral by 2050. In addition, the IOC should make it a requirement for all host cities to “anticipate changing natural conditions” and to develop a resilience plan to mitigate any negative effects (such as too little snow).

Starting with the Tokyo Games next summer, Figueres added, the IOC should integrate air quality monitors at every host venue and make air quality data visible via the scoreboard.

Figueres commended the IOC on the construction of its new LEED Platinum Olympic House, its wide-ranging sustainability strategy, and its carbon neutral status, but caveated that it was “no longer enough”.

“Because we no longer live in normal times. As of just a few months it has been made clear to everyone through new reports of science and climate change that we are not living with the challenge of climate change – we are living in a climate emergency.”

She added: “The IOC cannot allow the Olympic Games to come under any form of existential threat. To the contrary; the IOC has the responsibility and the grand opportunity to use its unequalled platform of the Games to exhibit beyond doubt the human capacity to rise to a historic challenge. This time, the biggest challenge humanity has ever faced.”