Inside the new Olympic House 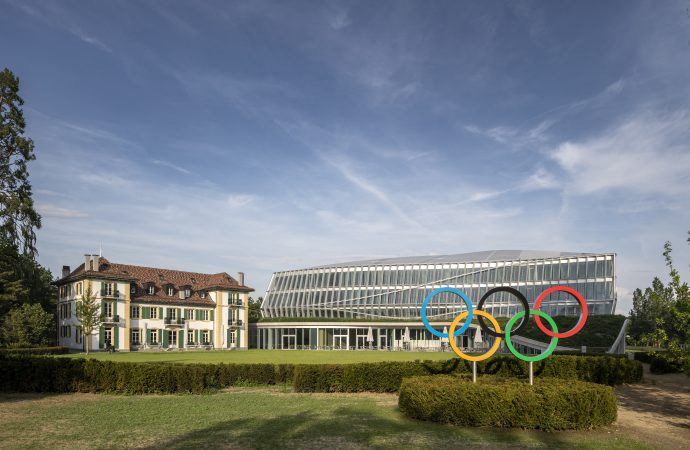 Natural light. Believe it or not, it’s the number one attribute employees crave in an office environment. Not bean bags and ping pong tables. Or gourmet cafeterias. Just good old fashioned natural light.

The International Olympic Committee, it appears, has taken heed of this desire with the construction of its new CHF145m headquarters. Ahead of its official inauguration on 23 June, the Lausanne-based office has been awarded three sustainability standards – LEED Platinum, the Swiss Sustainable Construction Standard and Minergie P (for energy efficiency) – in part due to its keen focus on workplace wellbeing.

At the heart of this is natural light. Designed by SAP Garden architect 3XN, the new IOC headquarters has been built with large glass facades and a 13-metre central skylight to maximise the use of natural light in the building. Workstations have been laid out to ensure that 90% of the spaces typically occupied for more than one hour per day have at least “two quality views” outside – a new LEED requirement.

Recent research suggests that the IOC has invested wisely. According to a survey conducted by HR consultant Future Workplace, more than a third of workers felt they weren’t being exposed to enough natural light in their offices. Of those, around half (47%) felt very tired due to the absence of natural light, with 43% feeling “gloomy”.

The objective of getting workplace wellbeing right, says Marie Sallois – who oversaw the development of the headquarters as the IOC’s director of corporate development, brand and sustainability – was the rationale for trying to achieve the latest versions of the sustainability standard the facility has obtained.

Indeed, the new Olympic House has received the most points (93) of any project that has gone through the US Green Building Council’s LEED v4 certification process – it’s latest iteration – to date. To achieve that, the building had to hit a number of prerequisites around indoor environment quality and demonstrate that it could contribute positively to the health of its occupants.

“There have been a lot of studies to show that natural light has an effect on wellbeing,” Sallois says during a press conference and guided tour at the new facility. “It’s simple to say it, but it’s more complex when LEED is asking for every single square metre, where you spend more than one hour, to have two good quality views.”

Complementing the building’s natural sunlight capabilities is its flagship feature: a “unity staircase” modelled on the five Olympic rings. The staircase falls below the central skylight and “encourages” employees to walk and converse with each other.

“We’ve been working on staircases as a means of interaction,” explains Kim Herforth Nielsen, founder and creative director of 3XN. “We have four PhDs at the office looking into architecture and environments and to see how different environments affect people’s behaviour. And we noticed that staircases affect people – if you put it in the centre and make it special with daylight on it, people will like it and use it.”

The former, like facilitating natural light, is a no brainer when you look at the science (and economics). Poor indoor air has been proven to significantly dent employee productivity. Indeed, a study investigating productivity the US manufacturing industry revealed that companies improving indoor air quality saved $20bn between 2000 and 2008.

More than that, it can have a hugely detrimental affect on people’s health. Indoor air pollution can be five times more powerful than outdoor air pollution, with 800,000 people dying every year due to poor air quality in the workplace.

Alongside interior design partner RBS Group, the IOC screened every product and material to find those with the least volatile organic compounds – matter that creates indoor air pollution. Paint with a low concentration of volatile organic compounds was sourced from the organisation’s sustainability partner, Dow Solutions, which is also helping to offset the carbon emissions generated through the building’s construction, and through ongoing energy use.

Even before the building was flushed out, its measured air quality was “5-10 times better than the air quality required in a new building in Switzerland”.

“This is where the industry isn’t ready,” adds Sallois. “When you go to market and ask for (products like) this, very few companies are able to demonstrate that they have the product to match your requirements. It’s costly. It takes a long time. And sometimes, you have to develop it with them.”

Much of the interior has been developed ergonomically to suit the differing needs of the IOC’s employees. Desks are adjustable so that people can work sitting down or standing up. Clusters of desks are also able to decide on temperature and light to meet their comfort via local control panels.

Of the three dimensions the IOC outlined to measure the success of the project – symbolism, functionality and sustainability – the focus on employee wellness has been put forward as a key component in achieving the latter two.

An awful lot of work has gone into making the Olympic House, in the words of IOC president Thomas Bach, “one of the most sustainable buildings in the world” from an ecological standpoint. One of the most iconic parts of the building, the roof shaped like a dove (below), has been produced from 1,000 square metres of solar panels, which produces 10% of the building’s energy.

Sallois explains that “almost 100%” of the Olympic House’s power comes from renewable energy sources. Compared to standard new office buildings, the headquarters uses only 35% of the energy. Water from Lake Geneva, a picturesque stone’s throw away from the building, is helping to cool the building in the summer and warm it in the winter. And the integration of an advanced stormwater management system also means that the Olympic House has only 60% of the water consumption of comparable new offices.

The link with Lake Geneva symbolises the IOC’s intrinsic connection with Lausanne and the wider region. That relationship was an important part of the sustainability plan, with the IOC making it a requirement that 80% of construction costs were spent with contractors working within a 50km radius – a challenging requirement to address, Sallois admits.

“We wanted to go local as much as we could,” she says, adding that smaller companies without the required skillset and certification were “brought up to speed” so that there wasn’t a “barrier to entry”.

“This project has contributed to the development of local competencies,” Sallois adds.

Lausanne’s large student population was given a stake in the project, specifically to help 3XN and the IOC discover solutions for recycling the demolished materials from the previous administrative building. Around 25 students were asked to volunteer alongside “the best experts in Europe” to map out a course of action for reusing the materials.

“We gave them the executive board room and got them to test all the materials in the building. After a week they were able to come up with a very creative solution, which ultimately led to reusing and recycling more than 95% of building materials,” Sallois explains.

With the publication of its Agenda 2020 roadmap – in which sustainability is one of the three main pillars – and its extensive sustainability strategy, the IOC knows that it has to push the boundaries to influence and inspire the Olympic Movement at large. If anything, its focus on employee wellness and subsequent benefits (e.g. increased productivity, recruitment and retention) may be even more compelling that its environmental focus for many International Federations and sports organisations.

“To achieve symbolism, functionality and sustainability – none of us had the solution beforehand,” says Sallois, with Nielsen and RBS Group’s Nora Trentini nodding in agreement. “We couldn’t copy and paste something that already existed. At every stage we had to go around the table and leverage the thinking capabilities of all the group to find solutions. But that has proven to be very successful because we were able to choose the right set of people.”

Can the Olympic House inspire other sports organisations to become more sustainable and proactive in promoting workplace wellbeing? Let us know in the comments below.