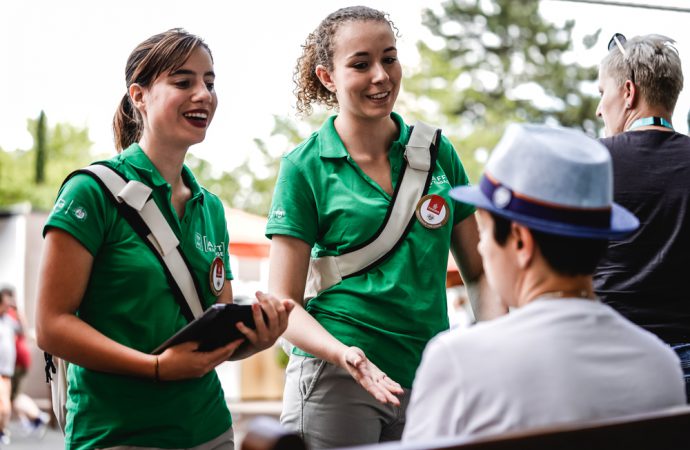 Having established a strong reputation for sustainability over the last 10 years, the tournament held at Roland Garros is challenging its food supply chain to be more responsible

On 26 May, the French Open – the second tennis Grand Slam of the year – will commence in Paris, with the historic Roland Garros complex of clay courts in the midst of an ambitious renovation project, expected to be completed in 2021.

This year, players and fans will be introduced to an upgraded Court Philippe Chatrier along with a brand-new 5,000-seat court, which becomes the third-largest stadium at the venue and is named after two-time women’s singles champion Simonne Mathieu. Uniquely, this semi-sunken arena is surrounded by greenhouses containing flora from four continents and more than 500 species, in a demonstration of the organisers’ commitment to cultivating biodiversity and their attention to detail when it comes to environmental issues.

In fact, sustainability has been embedded at all levels of the regeneration process since it was first conceived by the French Tennis Federation (FFT), and during that period the tournament has evolved to become a blueprint for sustainable sporting events in France.

Ten years ago, having already achieved carbon neutrality at Roland Garros, the FFT launched Opération Balle Jaune – a programme in which millions of tennis balls are recycled and transformed into sports flooring in facilities used by disabled children. The project has been replicated around the world.

In 2014, the French Open became the first sporting event in France – and the second globally after the London 2012 Olympic Games – to achieve ISO 20121 certification. And since January 2017, the FFT has been a signatory to a charter promoting eco-responsibility at sporting events. Developed by the French Ministry of Sports and the WWF, that charter is made up of 15 ambitious commitments to be achieved by 2020.

“We are very committed, but we still have a lot of work to do to be better,” says Viviane Fraisse who, in her role as the FFT’s head of sustainability, has overseen the progress of the tournament’s sustainability operations over the past five editions.

‘Green teams’ (see main image) now roam the walkways to engage with spectators on issues such as recycling and ecological transport, equipped with tablets and an interactive “eco responsibility” quiz that offers incentives in the shape of tickets to future French Opens. In 2018, 72.2% of spectators travelled to the stadium using transport that emitted little or no greenhouse gases (below), compared with 54.9% in 2011.

But while a high percentage of active mobility is one of the more attainable of the 15 commitments in the sustainable events charter – especially for a city-based tournament like Roland Garros, with Paris’s network of public transport – others, such as achieving a minimum of 50% sustainable food across the board, are more challenging.

In response to this objective, the organisers have teamed up with the GoodPlanet Foundation – an environmental NGO created by photojournalist Yann Arthus-Bertrand – to develop a sustainable food plan.

To build on this relationship for the 2019 edition of the tournament, the FFT launched a ‘Good Action Challenge’, designed to encourage its partners across the entire food and beverage supply chain – from production to waste management – to adopt environmentally friendly practices.

The response to the challenge has been positive, indicating a healthy new atmosphere of competition among partners, says Fraisse. For example, in 2019, coffee company Lavazza is ensuring that all of its produce on site is sustainable and Rainforest Alliance Certified, while ENGIE – the company powering Roland Garros with 100% renewable energy – is inserting solar panels on all of the venue’s food shops.

“It is our most important demand on sponsors: to improve their food offering,” says Fraisse. “It was a rational decision because of food’s important environmental and social impact, as well as the fact that there are five or six partners and sponsors directly committed to food.

“This challenge is an opportunity for us to highlight great initiatives, and to motivate partners to do better for next year’s tournament.”

Results will be collected at the end of the event, and if successful, the plan is to expand the challenge to other areas of sustainability beyond food, and to all tournament partners, including global brands such as Lacoste, Orange and Peugeot.

Fraisse believes that responsible procurement and engagement with sponsors is vital, and that there is untapped potential in sports events for promoting sustainability. However, she caveats that there needs to be greater involvement from athletes and closer collaboration among organisers to amplify the messaging further.

“We have good messages from athletes about social issues; a lot of athletes are very involved with disadvantaged children, and many of them have foundations,” she explains. “But for environmental messages, they don’t feel they are legitimate voices because they are travelling by plane [to tournaments].”

The FFT’s scope, then, to involve the players in its sustainability efforts, is limited by the players’ unease over legitimacy, and the organisers’ own reluctance to distract its star assets from their focus on the tournament. But Fraisse suggests that greater communication between the Grand Slams could be a way of tackling this.

“We have to be innovative,” she says. “Perhaps we could work together with the three other Grand Slams to communicate the same sustainability messages through the players for one year at each Slam, which would take up less of their time.

“Everybody has to make an effort, but if we can persuade some of the big-name athletes to give messages – and people find them authentic – then the impact could be enormous.”

Fraisse is also hoping that the other Slams – the Australian Open, Wimbledon and the US Open – will join them in becoming part of the Sports for Climate Action movement, with the FFT among the first batch of sport organisations to sign the UN framework in December 2018. To accelerate this momentum, on 5 June – the second Wednesday of the tournament, to coincide with World Environment Day – Roland Garros will co-host its first-ever climate conference, in partnership with the UN Framework Convention on Climate Change (UNFCCC), to promote best environmental practices in the tournament ecosystem.

In climate change – just as it is in food and beverage, public awareness, biodiversity and many other areas of sustainability – the French Open is blazing a trail for other organisers to follow, and which could propel tennis into a leadership position on sustainability in global sport.

What other sports events or tournaments are challenging their sponsors and partners to improve their sustainable initiatives? Let us know in the comments below.