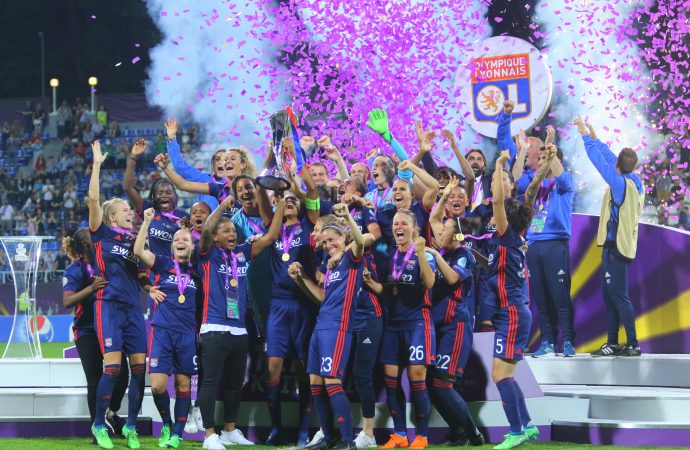 The European football governing body has pledged to investigate “innovative” commercial revenue and media rights models with sponsors, partners and broadcasters to capitalise on the growing popularity of the women’s game.

This season’s Women’s Champions League Final, being played tomorrow in Budapest, Hungary, is the first time the flagship match is being played in a different city to the men’s final – a decision that was made to liberate the women’s final and celebrate the occasion in its own right.

The final is the only match in which UEFA sells the sponsorship and broadcasting rights, with individual clubs managing deals themselves during the earlier rounds. A report in Reuters last August suggested that UEFA was looking into the possibility of centralising those rights from the quarter-finals onwards, but the ambition wasn’t directly referenced in this strategy.

Since sponsorship rights for women’s competitions were unbundled and sold separately from men’s competitions in late-2017, UEFA has signed landmark deals with Visa (a seven-year agreement) and Nike (a five-year deal).

The organisation reiterated its desire to build on that momentum by taking steps to increase the visibility of women’s competitions and make them even more attractive for potential sponsors. Part of UEFA’s plan to achieve this is to develop a “coordinated” communications and media plan, and to include more female football personalities (players, coaches, referees and futsal players) into wider UEFA activities alongside high-profile male personalities.

Although UEFA failed to disclose more specific actions, it mentioned its desire to generate fandom around women’s UEFA competition and domestic football, with the #WePlayStonger and anti-discrimination #EqualGame campaigns playing a role in changing perceptions of the women’s game.

UEFA is also preparing to discuss the business case for women’s football with member associations and clubs in a bid to commercialise further.

On top of its commercial priorities for the women’s game, UEFA has also established some ambitious participation and governance goals.

Over the five-year period that the strategy covers (2019-2024), UEFA hopes to bring the number of female footballers in Europe up to 2.5 million – double the 1.2 million referenced in its 2016/17 women’s football report.

Improving the quality of coaching and referees, encouraging men’s clubs to embrace female football, and developing suitable environments for women and girls to play were strategies put forward to achieve this target.

In addition, UEFA has committed to invest in participation programmes, although the level of investment was not articulated in the strategy.

In terms of governance, the body is aiming to double female representation on all of its bodies. French football official Florence Hardouin is the only female member of UEFA’s 22-strong Executive Committee, although a handful of women feature in the organisation’s related bodies, such as those dealing with disciplinary matters.

Educational, leadership and mentoring programmes will be implemented in the business as a way to increase these numbers.

“This strategy will champion, innovate and accelerate women’s football for all so that every woman and girl can have a love and affinity for football, whether as a player, coach, referee, administrator or fan,” she added.