Would a ban on fossil fuel sponsorship in sport be justified – or feasible? 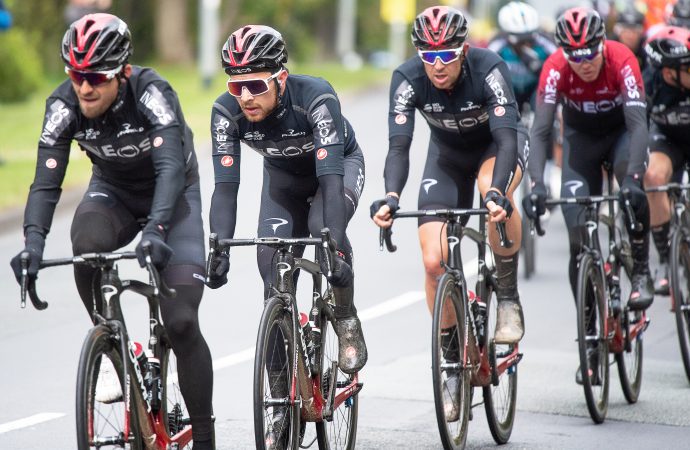 Following Ineos’ unveiling as the main sponsor of what was formerly Team Sky, Friends of the Earth has called for a ban on fossil fuel sponsorship in sport. But is it possible?

When Sir Dave Brailsford and four-time Tour de France winner Chris Froome took to the Yorkshire Dales to unveil Ineos as the new main sponsor of what was previously known as Team Sky, the response was decidedly mixed.

While many British cycling fans celebrated the fact that one of the most successful teams in the nation’s sporting history could live to fight another day – despite the giant broadcaster deciding to pull its backing late last year – other reactions ranged somewhere on the scale between mild discomfort and wholehearted outrage that a petrochemical company associated with fracking was taking over the reins.

Froome, Brailsford and Ineos’ billionaire owner Sir Jim Ratcliffe used a press conference that day to attempt to allay concerns, with the former two suggesting that the team’s commitment to significantly reduce its single-use plastic consumption was still on the table, even though its new backer is among the biggest plastic producers in the world.

But environmental groups continued to protest. One of the more prominent, Friends of the Earth, even called for a blanket ban on sponsorship from the fossil fuel industry in sport.

One of the group’s campaigners, Simon Bowes, said that fossil fuel companies “have no place in sport sponsorship” and that in doing so they were “trying to distract from the awful damage their products cause”. Further, the advertising ban on tobacco companies “should also apply to fossil fuels” who “wreak havoc on the health of our planet”.

First, a clarification: the tobacco industry continues to sponsor sport. Indeed, Formula One has recently come under fire after teams Ferrari and McLaren sported branding sponsored by Philip Morris International and British American Tobacco respectively (although the logos were not promoting cigarette consumption – which is banned in the sport).

The episode demonstrates just how difficult it is to chase a company or industry out of the sponsorship game – even if their product or service is perceived to be bad for the health and wellbeing of the human race. So is it right – or even feasible – to imagine a world where fossil fuel companies are banned from sponsoring sports entities or events?

Researcher, journalist and campaigner Daniel Voskoboynik wrote a comprehensive yet easily digestible article about football’s long association with the fossil fuels industry. Internazionale Milan, Bolivia’s Oriente Petrolero and CDEF Esmeraldas Petrolero from Ecuador were either founded by oil companies and workers or, in the case of Inter, built for extensive on-field success by the wealth of oil magnate Angelo Moratti.

Sponsorships from the oil and gas industry is nothing new in sport. But according to Professor Simon Chadwick, the professor of sports enterprise at the University of Salford in the UK, the nature of the relationship between the fossil fuels industry and sport has transformed from a “conventional marketing relationship”, cultivated to boost consumer awareness, to a “more complex and subtle” arrangement.

“What we’ve seen over the last 10, possibly 15, years is fossil fuel companies using sport and sports sponsorship as a means through which to engage important decision-makers and key stakeholders,” he explains, using giant Russian oil and gas company Gazprom’s sponsorship of the UEFA Champions League and FIFA as a specific reference.

“If you sponsor the Champions League and you invite an important decision-maker to the corporate hospitality area, they aren’t going to say no. They’re going to be there. So effectively what you’re doing is sidestepping the normal diplomatic channels and fast-tracking access for your company officials to important stakeholders.”

Gazprom, which is majority-owned by the Russian state and sells oil and gas to national governments, has been sponsoring the UEFA Champions League since 2012 (recently extended until 2021) and FIFA since 2013. According to a recent Carbon Disclosure Project report, the company is one of 25 corporate and state producing entities responsible for more than half of industrial greenhouse gas emissions since 1988.

Ineos’ foray into sport, says Chadwick, is “morphing” the relationship between sport and the fossil fuel industry further.

Chadwick highlighted the accusations made by Friends of the Earth that Ineos was using sport as a form of “greenwashing” (when a company deflects criticism of its environmental record by supporting eco-friendly causes or popular endeavors).

“There are major concerns around fracking, but during the Tour de France most people won’t be protesting about fracking.” he explains. “What they’ll be doing is thinking ‘Oh my God, Ineos is really successful. They have previous Tour de France winners in the team. Isn’t it exciting.’ And so people’s brand association will be with those characteristics rather than anything to do with the environment or fracking.”

As long as fan perceptions remain that way, there isn’t likely to be a huge groundswell of negative opinion around oil and gas companies sponsoring sport, and the subsequent pressure from the public to outlaw it.

Sport sponsorship analyst Lefteris Coroyannakis tells The Sustainability Report that he hasn’t seen fossil fuels companies become “overly defensive” in their sponsorship approach in the same way that, for example, alcohol and betting companies always stress responsibility around beverage consumption and gambling in their activations.

“It doesn’t seem to be hitting people emotionally to the extent that other things have,” he adds. “How many football fans have the background knowledge on Gazprom’s role in geopolitics to have a view on whether or not it should be lighting up European football?”

Coroyannakis caveats that these attitudes may soon change as climate change edges its way into the public’s psyche, thanks in part to much-publicised reports, like IPCC’s bleak picture of the future if the world fails to decarbonise sufficiently, and high-profile activist groups like the Greta Thunberg-led Climate Strike and Extinction Rebellion.

He explains, however, that fan attitudes are likely to differ from sport to sport.

This in part, may explain the disproportionate criticism directed at Ineos and the teams that have accepted its investment. Cycling and sailing (Ineos paid £110m to bankroll the team Sir Ben Ainslie will skipper at the 2021 America’s Cup) are two sports intrinsically linked to the environment. In fact, cycling has often been put forward as one of the key solutions for decarbonising transport. There were no reports of huge outcry when Schalke 04, the German Bundesliga club, partnered with Gazprom as its main shirt sponsor (although Greenpeace did crash a Champions League match between the club and FC Basel of Switzerland in 2013). And you don’t often hear queries about Petronas’ sponsorship of the Mercedes Formula One team.

But if fans aren’t forcing sports entities to rethink their relationships with fossil fuel companies, will the pressure come from within? Will sports organisations, which are increasingly trying to become more sustainable in their own operations, start to engage more with sponsors that are perceived to be more environmentally friendly and ethical?

Coroyannakis is pessimistic about the prospect in the immediate future.

“The threshold can be quite low in terms of what (sponsorship) sport would say no to,” he says. “Money talks, and this has lead to certain rights holders only turning down potential partners that they really cannot justify publicly.”

Chadwick agrees, and explains that the issue is rooted in governance. He says: “Sport is still very traditional and conservative. It’s all about winning on the pitch or on the track. Nothing else matters if you stand a chance of winning. Goals, like environmental stewardship, societal issues – they’re relegated to being of secondary importance at best.”

However, there are a growing number of sports organisations that are being more selective about the sponsors that they’re working with. At the Sustainable Brands Conference in Paris last month, World Sailing’s head of sustainability Dan Reading said there were “probably some categories of sponsors that we wouldn’t take sponsorship from”, particularly since the launch of the federation’s Agenda 2030 sustainability strategy.

The call to ban fossil fuel sponsorship in sport also raises questions about other companies and industries. Betting companies sponsor sports teams to the tune of $330m, but they are now subject to increasing scrutiny, with the government in Italy rubber stamping a blanket ban on gambling sponsorship in Serie A from July.

The airline and automotive industries, that contribute heavily to the planet’s carbon footprint, account for 27% of sponsorship spend in UK sport alone. A further 16% of spend comes from the alcoholic beverage and soft drinks industry, which has been criticised in recent years for the amount of added sugar some companies put in their drinks.

You could, feasibly, make a case for sport to examine its relationship with each one of these industries.

And if fossil fuel sponsorship was totally outlawed, what could replace it? Coroyannakis says that as second tier sport sponsorship (below the levels of the UEFA Champions League, for example) becomes more flexible, the number of industries and organisations that can take advantage is growing.

“I can’t tell you, one-for-one, fossil fuels goes out and another industry sweeps in,” he explains, “but sponsorship offerings from a rights holder is generally becoming more sophisticated and therefore open to a larger, broader group of potential partners that can be activated in more bespoke ways.”

Would the renewable energy market, viewed as the solution to the planet’s dependence on fossil fuels, have the means and the motivation to fill that hypothetical gap and use sport as a vehicle to reach more potential customers? Although the oil and gas industry continues to dominate the energy market, the renewables market is growing at a rapid pace, and is expected to be worth more than $2 trillion globally by 2025.

The partnership has helped save seven million kilograms of carbon since it was agreed in 2017, and the parties have since worked on a project to install an energy-storing battery system at the Emirates to improve its energy efficiency.

“There’s a lot of activity going on, but it doesn’t necessarily register with us as some of them aren’t particularly high-profile sponsorships,” says sponsorship consultant Mark Cornish. “Nonetheless they’re there, and I think it will only grow as people start to consume more energy from renewable sources.”

But, according to Chadwick, sport and the fossil fuels industry remain “inseparable”. And while companies like Gazprom, Total and Shell are prominent in a number of sports, Chadwick has identified an even larger issue.

“What I think is more significant is nations like Qatar, which are mass producers of fossil fuels, own sports entities like Paris Saint-Germain,” he says. “Qatar sponsors a whole load of different properties – it’s not just football, it’s horse racing and motor sport.”

And while nation states are heavily involved in sports ownership and sponsorship, Chadwick sees any calls to ban fossil fuel involvement in sport as a “non-starter”.

“It would require something much more fundamental, such as applying environmental standards to the ownership and operation of sports properties. And how would you do that? It would seem to me to be pretty much, at this point, a non-starter.”

Is a blanket ban on fossil fuel sponsorship a non-starter, or does Friends of the Earth have a case? Let us know in the comments below.