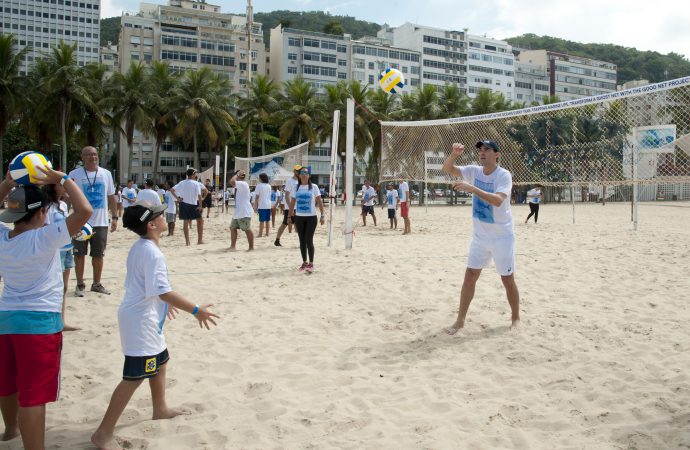 The world governing body for volleyball is encouraging fans to participate in its ocean conservation campaign by making donations to its new NGO partner, the Ghost Fishing Foundation.

A landing page has been designed by the FIVB for fans to make monetary pledges as part of its Good Net Project. Money collected will be distributed to the Ghost Fishing Foundation, which works with divers and salvage companies across the globe to remove discarded fishing gear from the oceans.

‘Ghost’ fishing gear, as it’s commonly called, is the “most harmful” kind of marine waste, according to the NGO, which works with the Healthy Seas Initiative, World Animal Protection and Greenpeace as part of the Global Ghost Gear Initiative.

More than 640,000 tonnes of fishing gear is discarded in oceans every year, trapping and killing marine life.

Anna Sarafianou, the FIVB’s head of marketing, said that the focus on nets created an instant connection between the cause and the sport of volleyball, and that the nature of the Ghost Fishing Foundation’s work made the project a compelling way for the International Federation to tackle the ocean plastic crisis in a way that engages fans.

“They’re a group of volunteer divers, and what was most compelling was their passion, dedication and the fact that, even though they started as volunteers, they have a very structured approach,” she told The Sustainability Report.

“We want to create awareness about this problem through our fan community, which is a large community. We wanted to sensitise people to this cause and get them to participate in this initiative by donating. The more donations we have, the more ghost nets will be retrieved.”

To make the campaign more tangible for fans, the FIVB will upcycle some of the salvaged nets into community volleyball nets.

Attendees were also given the chance to learn more about the danger plastics pose to the oceans and marine life.

Sarafianou said that the next upcycled net will be demonstrated at the World Tour Finals in Rome in September. But there was currently no target in terms of the number of community nets the FIVB wants to develop.

“Ou objective is to make this a major topic of discussion in the volleyball community,” she explained. “We’re not, for example, looking at installing 10 nets per year. We are at the beginning of the project and our objective is for volleyball to be a part of reducing plastic pollution and saving animals.”