The challenge of hosting a sustainable marathon 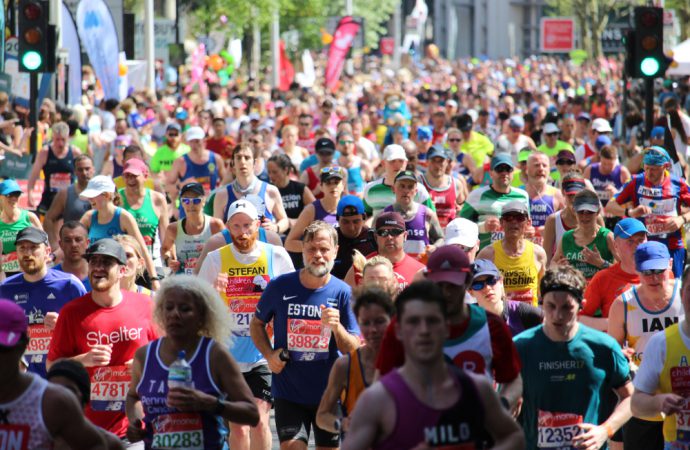 More than 50,000 competitors. A vast number of spectators. And a 26-mile playing field. Hosting a sustainable marathon is no mean feat. Will Fulford-Jones talks to the organiser of the London and Chicago races

Integrating sustainability into major sporting events is rarely straightforward, but marathons represent a particular conundrum for the organisations that stage them.

It’s partly, of course, a matter of size. A field of play stretching more than 26 miles (42 kilometres), entry lists topping 50,000 runners, uncountably vast numbers of spectators watching from public streets and parks – these elements and others mean that marathons require immense resources just to get the show, literally, on the road.

But it’s also about complexity. The need to work with multiple districts or boroughs that may have different priorities. The huge numbers of paid staff and volunteers. The network of partnerships required to run hydration stations, distribute recovery packs and deliver runners safely to the start.

Integrating sustainability into such an elaborate web is a major challenge, but it’s one that marathon organisers appear increasingly eager to meet.

The Virgin Money London Marathon has made great strides in sustainability over recent years. Organisers London Marathon Events (LME) have set out their explicit commitment to becoming “a world leader in delivering sustainable mass participation sports events”, setting an ambitious target of zero waste to landfill by 2020.

As Hugh Brasher, LME’s event director, explains, the backing of the city has been an important help in LME’s push towards staging a more sustainable marathon, but so has been the great swing in public opinion. “The Mayor of London has been very clear on the importance of sustainability, but really, this is important for everybody. Different boroughs will be at different stages in the [sustainability] process – but this is an open door we’re knocking on.”

LME are trialling a raft of innovative new measures at this weekend’s 2019 event. A closed-loop project in four boroughs will see plastic bottles collected and recycled into new bottles in the same boroughs where they were discarded. Some 700 runners will trial new bottle belts, made from 90% recycled materials, to help monitor runners’ water use, with the ultimate aim of reducing water use and waste in future races. Compostable cups and biodegradable capsules will be used at selected drinks stations. And 500 runners will wear special capes at the start and finish, avoiding the need for kit bags and thus reducing the requirement for their gear to be transported across London.

That’s not all, says Brasher (below). “We’re looking at how we can reduce the number of trucks we utilise, reduce the number of generators we have out on the course, use different lighting – there’s a raft of things we’re doing to improve sustainability now and in the future.”

Aided by Kate Chapman, part of the team that helped the London 2012 Olympic and Paralympic Games achieve the first ever ISO 20121 certification for event sustainability, LME has established a sustainability working group to help develop these policies and others. But, Brasher points out, it’s not the organisers’ sole source of inspiration.

“[As well as] the working group, we have a really engaged workforce who look at things and come up with ideas. We’ve been working with partners, looking at supply-chain elements. And we look at other events and other event organisers, try and take their best practices, and then try to engineer them – if we can – to do them slightly better.”

Discussions between the organisers of the six major marathons in the Abbott World Marathon Majors group – Berlin, Boston, Chicago, London, New York and Tokyo – are a crucial source of knowledge. “[Our] operations teams and race directors meet together, sharing presentations on the best practices of each of the races. For us, and looking at the industry as a whole, sustainability is definitely a big part of [the discussions].”

“It’s counterintuitive,” admits Brasher. “But when we did a deep dive into the analysis and looked at what the provisions were, what was needed, how people were using them, what volunteers were doing – we believe that stocking the stations with more water but reducing the number of stations [is the right approach].”

The runners constitute something of a captive audience for marathon organisers, who are able to explain their initiatives directly to them and encourage more sustainable behaviour – but how do you reach the spectators? Start, says Brasher, with the athletes.

“Our research suggests that every single runner brings an average of around four and a half spectators to the race, which means there are around 200,000 spectators linked through one degree of separation to a runner. So by messaging the runners to talk to friends and family who might be coming along, we believe we can help people to be more sustainable in their approach to coming to the event.”

Four thousand miles from the London Marathon’s starting line in Greenwich Park, the Bank of America Chicago Marathon has long been a sustainability leader in its field. Nine years after becoming the first marathon to be certified by the Council for Responsible Sport, the race and its organisers, Chicago Event Management (CEM), continue to emphasise the importance of sustainable practice. And as executive race director Carey Pinkowski points out, the city itself has helped foster their attitude.

“For our event and for the City of Chicago, [sustainability] has been an initiative that’s really blended together. As one of the largest events in Chicago, we’ve had a great platform for working with the city and driving these initiatives to lead by example. It’s just been part of our culture: as residents of Chicago, as event producers, [there’s been] an opportunity for our event and our organisation to lead on some initiatives that are actively part of our operational scheme.”

“For an event this size, you really need great support from local government, from the city and from city agencies. In particular, when it comes to sustainability, we couldn’t do it without the support of the Department of Streets and Sanitation, without their help and without their resources – their equipment as well as their staff. We also work side by side with the Chicago Park District and their sustainability programmes in order for us to collect and then take items to be properly recycled or composted.”

Corporate sponsors and partners also have a role to play, continues Pinkowski, but so does everyone involved in the event.

“We have some very high-profile, dynamic companies [as sponsors] that have integrated sustainability into their cultures, which is a great complement to what we do. But from across the spectrum of our event – our participants, our volunteers, our residents, everyone – there’s just a real culture for being much more attuned to the environment. We look at every element through the planning process, the delivery and the implementation at the back end of it. The key is that there’s a real team effort across the organisation.”

And like Hugh Brasher in London, Nishi also emphasises the importance of talking to other event organisers and pooling ideas for the future.

“We come together to learn from one another, share solutions and build off them. When it comes to our partners in Abbott World Marathon Majors, why would you want to start from scratch when we can share a plan [and] make it more efficient? What we do in Chicago – this is an important mission that we’re on, and we want to share it with other races. We’re the second largest marathon in the world, and we want to be a leader in our industry and showcase best practices.”

Although CEM are blessed with a supportive city at both governmental and civilian levels, they’re keen to point out that sustainability isn’t just about actions – words also have a role to play in bringing the benefits of sustainable practice to a wider audience. Citing Chicago Marathon initiatives such as the delivery of organic waste (including compostable cups) from the event to a local worm farm, where it’s transformed into a nutrient-rich compost that’s used by the Chicago Park District in the city’s green spaces, Nishi emphasises the power of narrative in raising awareness among the public.

“We want to improve what we do, but we also want to tell the story. We all get the ‘reduce, reuse, recycle’ message, which is important for raising awareness, but a lot of times, the story gets lost. For example, I can put my bottle in a recycling bin – but what happens to it beyond that? When you can tell a story, especially a closed-loop story, then you’re really able to show people what can be done.”

What else can mass participation sports events do to reduce their carbon footprint and negative environmental impact? Let us know in the comments below.