How the Special Olympics USA left an environmental and social legacy 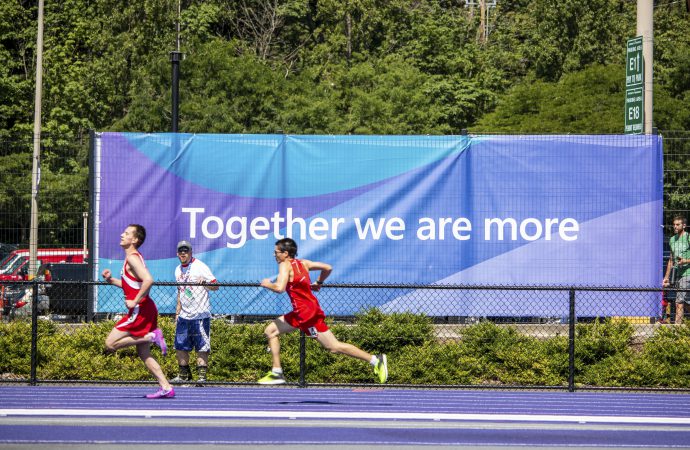 From developing the ‘Green Team’ to helping intellectually disabled people enter the workforce, the 2018 Games set the benchmark for all aspects of sustainability

Founded in 1968, the Special Olympics offers those with intellectual disabilities the chance to take part in sporting events on a national and international level, with inclusion and the acceptance of all its cornerstone value. At the 2018 Special Olympics USA Games (hosted in Seattle), this ethos remained, while sustainability was emphasised as a key target by the organisation for the first time.

Part of that sustainability plan focused on curtailing carbon emissions and mitigating negative environmental impacts. But with more than 200 million people worldwide having an intellectual disability, the acceleration of social inclusion for those individuals is a priority for the event – and the place where it can have the biggest impact.

Environmentally, one of the first and most important steps the Special Olympics USA sustainability team took was measuring and understanding what the negative impacts were – and where they were coming from – and using data available from other large sporting events before acting on the information gathered.

“Initially, we said that we wanted to narrow it down to a few things where we we knew there would be a big impact, like transportation,” says Karlan Jessen, director of volunteers and sustainability for the 2018 Special Olympics USA Games. “The incoming flights and transportation for all the athletes was our biggest carbon footprint, so we knew that was where we could have the greatest effect.”

For the USA Special Olympics, this was achieved through a plethora of schemes. The organisation distributed 1,623 ORCA transit cards to athletes and visiting family members, while LimeBike, a bicycle rental service, was enlisted by the organisers and provided 9,925 subsidised individual trips.

Furthermore, 10,000 athlete and fan trips were taken on local transport, with trains used to transport the athletes between the airport to the University of Washington campus, while a bus system on loop worked to keep people out of individual vehicles.

Another focus area was recycling and composting. Notably, the sustainability team not only recognised the impact it could have by reducing the ubiquity of single-use plastics or filling landfill with food waste, but by gaining knowledge about what resources were available in Seattle.

“We were in a good position with the hosts,” explains David Muller, who formed part of the team responsible for developing the event’s sustainability plan along with Jessen and Tim Reeve. “We didn’t have to create a collection or hauling system from scratch, and the fact that we were able to take advantage of existing infrastructure was really important. It was certainly an application of best practices in the industry.”

This understanding enabled the Special Olympics to offer both composting and tri-waste bins across its event, while ensuring that those who had not encountered such recycling systems before threw away their litter correctly by assembling a ‘Green Team’ of 175 volunteers.

These schemes were further developed as 800 pounds of leftover food was donated to local food shelters, feeding those in need while reducing the organisation’s environmental impact – a project that demonstrated the interconnectedness of environmental, economic and social sustainability.

“When one thinks about these large events, legacy is seen as a big stadium or sports facility that will be left for the community,” Reeve explains. “Legacy in the case of the Special Olympics USA was more than that. There was a real emphasis to engage the community with key sustainability issues, including inclusivity.”

One of the flagship projects devised by the team was an initiative to prepare people with intellectual disabilities for employment. Running alongside the USA Games 2018 was a first-of-its-kind on-site job fair, which offered athletes and other visitors the chance to improve their interviewing skills, understand and build the CVs, and discover what job opportunities may be available to them in the future. The project may become a regular feature for future Special Olympics events.

In an attempt to attract sponsors, the organisation set a challenge to prospective partners: include people with intellectual disabilities in your campaign. Not only in the planning process, but also for the “boots on the ground” tasks. Coca-Cola stepped up.

Initially, the beverage giant hired Special Olympics Washington athlete Marcia Barnett to help guide its inclusion efforts. This led to 14 individuals with intellectual disabilities being hired by Coca-Cola for the duration of the event, with two of those going on to earn permanent contracts with the business.

“The hiring and economic opportunity – it’s game changing for people to feel they are part of the team, to have some gainful employment,” states Reeve.

Engaging commercial partners in sustainability projects like this also helped the Special Olympics USA generate an extra $100,000 in sponsorship revenue.

Despite the positive measures taken, Jessen, Muller and Reeve admit that they are not completely satisfied with the work done, with time constraints cited as the principle stumbling block.

“There was obviously a delta between what we could accomplish with the limited time and resources available, and what we strived for as our mission,” Muller says. “For perspective, the organisation has already begun for the next USA Games in 2022.”

This long-term vision and recognition that sustainability needs to be a systematic and ongoing process is an important one, and led the Special Olympics to produce both a report and toolkit aimed at helping those planning similar events avoid the same pitfalls.

“We were given a blank page when approaching this project with regards to defining what sustainability is. The toolkit enables the next person to start at mile 50 rather than at mile 0,” explains Reeve.

Both documents offer crucial information on topics such as how to devise relevant sustainability goals, create action plans, and, crucially, to leave a similarly positive legacy long after the event leaves town.