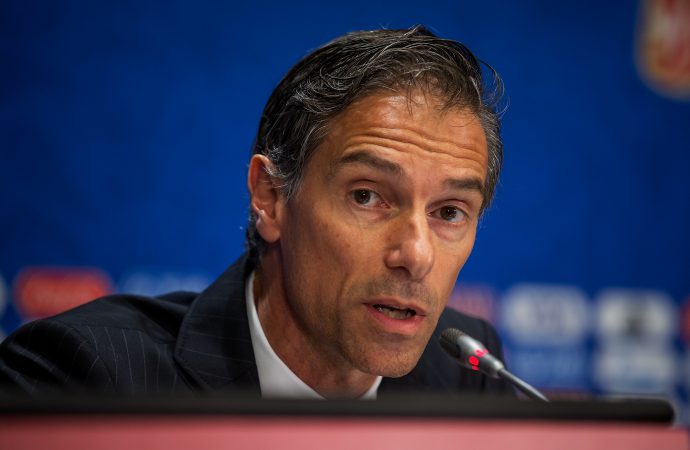 Bounding into a meeting room with a smile at FIFA’s Zurich headquarters, Federico Addiechi, the governing body’s head of sustainability and diversity, greets The Sustainability Report with some good news. Hakeem al-Araibi, the dissident footballer from Bahrain, has finally been released from the Thai prison that had been his home since November.

A week before our meeting, Addiechi appeared in Thailand as FIFA’s representative at al-Araibi’s hearing and witnessed, first hand, the suffering he had endured during a near four-month stretch behind bars. After speaking out against the torture inflicted on pro-democracy athletes in the Gulf state, al-Araibi was a wanted man. And even after fleeing to Australia (which granted him asylum after his escape) he was captured during his honeymoon in Thailand at the behest of Bahrain’s ruling regime.

Dealing with issues around human rights has become a core part of Addiechi’s brief. Naturally, whenever a World Cup rolls around a giant spotlight is shone on the working conditions of the construction workers tasked with building spectacular new stadiums, as well as the general rights of women, migrants, the disabled and LGBT individuals living in the host nation.

Qatar is the next nation to host the flagship tournament in 2022, and a large proportion of our conversation centres on the preparations. Since being revealed as the winning bidder in 2010, it would be fair to say that Qatar has received a disproportionate amount of scorn due to its perceived lack of footballing heritage and the fact that the tournament has to be scheduled in the Northern Hemisphere’s winter months for the first time in history.

Scrutiny intensified further when a damning report published by Amnesty International in 2016 alleged that migrant workers were being exploited, with low pay and dreadful working conditions. It was also claimed that many were having their passports and other important documents confiscated.

And while it was obvious that there was a significant problem to mitigate, Addiechi – a former international volleyball player himself – spotted an opportunity to create a lasting impact and legacy.

“Qatar 2022 is a unique tournament because the World Cup is playing such a central role in the development of the country and the vision that Qatar has,” he tells The Sustainability Report. “It offers us a tremendous opportunity in terms of going beyond what we must do regarding our own responsibilities and making sure the World Cup has the best impact on society and the economy while having the least possible negative impact on the environment.”

Following the publication of the Amnesty report, Addiechi explains that FIFA and the Supreme Committee for Delivery and Legacy (the local organising committee) made a concerted effort to go beyond set requirements regarding human rights and labour protection – ensuring and enforcing – to promoting best practice across Qatar so that incidents like these would be less commonplace across all industries.

As a result of its work in this area, FIFA found itself assisting other industries, such as the hotel sector, in reforming labour practices.

“We’re a sports federation and we’re contributing to the reform of a hugely needed and important labour law,” Addiechi explains. “Standards have been set up by the Supreme Committee in terms of protection of workers, accommodation, health and safety, and payment. We are far from solving all the problems that exist in terms of labour in Qatar, but there is a focus beyond the 30,000 workers we have under our responsibility.

“Who knows if it would have happened if it weren’t for the World Cup.”

The establishment of the Supreme Committee has been fundamental to the progress, says Addiechi. Whereas the responsibility for preparing for previous tournaments was split among government and private businesses, the Supreme Committee’s ability to oversee everything – including stadium construction – means that hardline policies regarding human rights and environmental stewardship can be more easily enforced.

Ahead of the 2018 World Cup in Russia – where human rights issues were also flagged as a concern – FIFA had to have a “more hands-on intervention”, says Addiechi, and put mechanisms in place to mitigate those issues.

However, he admits that having an impact in vast, developed nations like Russia and Brazil (where the 2014 edition of the tournament was held) was far more challenging than in Qatar, where, to some extent, there is a blank canvass to work with.

“Everything is so interconnected in Qatar – the country is so small and there is a linkage between everything that’s happening. We can go one step further, involve other actors and have a bigger impact,” he adds. “We want to be strict about things in countries like Brazil and Russia, but we have to take care of our own responsibilities and don’t necessarily have the resources to go beyond.”

Indeed, the hosting of the World Cup has resulted in the establishment of a ‘forum’ in Qatar in which a number of industry leaders discuss and try to remedy issues, such as lack of accessibility, that the country is facing. Representatives from the transportation industry, the entertainment sector and attractions business meet on a quarterly basis to make commitments, such as improving ramps for wheelchair users, or the implementation of Braille signs for blind people.

It wouldn’t be an exaggeration to say that the World Cup at the centre of the entire nation’s development. The $6.5bn budget distributed to the Supreme Committee to deliver the event is part of a larger $200bn pot being used to finance a nationwide infrastructure project over a ten-year period.

Of that $6.5bn, a large proportion has gone towards the construction of eight new venues – a factor that has fuelled the fire for critics. Many have queried the sustainability credentials of an event where so much building will occur. Others have asked questions about the legacy plans for the stadiums. How will Qatar, with a modest footballing heritage and a population of 2.6 million people, make a success of these structures?

Addiechi acknowledges that so-called “white elephants” have been built for several major sporting events over the years, World Cups included. One only has to look at the Arena da Amazonia – which was built for Brazil 2014 in the middle of the Amazon but sits almost derelict five years later – as a recent example.

A legacy for each stadium in Qatar, however, was submitted in the original proposal. In fact, Addiechi reveals that business plans for each stadium have been “embedded in the bid” since the very beginning – a first for the World Cup.

One of the plans is the development of partially modular stadiums that will be able to reduce capacity following the tournament. The 40,000-seat Education City Stadium, for example, will have its capacity cut by half with 20,000 seats donated to build stadiums in developing countries.

The first – and so far only – FIFA-compliant demountable stadium will also break new ground for the World Cup. The Ras Abu Aboud in Doha will be completely taken apart following the tournament with materials likely to be donated.

The project, says Addiechi, is being viewed by FIFA as a “test” to see if temporary infrastructure is a better option from an environmental and legacy point of view than permanent infrastructure.

“It sounds like a good idea, but I don’t yet know if it actually is,” Addiechi explains. “We have commissioned an environmental assessment of that particular stadium as part of our carbon footprint analysis for Qatar 2022. I want to know if it’s better for the environment to ship the materials to Qatar, build it, use it for a few months, spend years demounting it, and then shipping it elsewhere.

“I’d also like to find out how many cycles of that you would need to do in order for it to be really sustainable – or at least more sustainable than building something permanent.”

“Of course this is not the only aspect of the bid, but we would definitely like to know (the impact of modular stadiums),” he says. “The best thing would be to use stadiums that already exist. The United 2026 bid (the winning bid put together by the US, Mexico and Canada) had the majority of stadiums already existing.

“You could argue that the World Cup should always occur in the same place so that you can reuse infrastructure. But the World Cup is not just about sustainability considerations, and the principle that every country has the chance to organise a World Cup is a value FIFA wants to uphold.”

It’s not just local organising committees that FIFA is trying to engage with its sustainability message. Other stakeholders, like fans, sponsors and suppliers, are also becoming part of the conversation.

Since the 2014 World Cup in Brazil, FIFA has tried to get the former involved in a carbon offsetting project by offering tickets for the final as the main prize. During Russia 2018, the governing body offset 2.9 tonnes of carbon emissions for every signup. However, less than 6,000 fans took part compared to 45,000 in Brazil – with the large decrease attributed to the stringent data protection laws coming into force last year.

“In terms of the numbers, it was not as good as we expected,” Addiechi admits, “but this time we weren’t able to send an email to every ticket holder. They had to register proactively, which was a barrier.”

International and inter-city travel by fans accounted for 72% of the 2.1 million tonnes of greenhouse gas emissions generated by the 2018 World Cup. FIFA, says Addiechi, offset 100% of the emissions that resulted from the organisation’s “direct operational control”, although this accounted for 243,000 tonnes of emissions – 11.2%.

“We consider the emissions of the fans to be indirect and out of the operational control of FIFA, but we want to continue to do something about this. There is an intention from Qatar to engage with fans and have an offsetting programme,” says Addiechi, adding that a number of initiatives were currently being discussed by FIFA and the Supreme Committee.

One area that Addiechi has found “leverage” is in working with FIFA’s various suppliers. During our meeting, he produces a document setting out environmental protection guidelines for the production of footballs. It encourages suppliers to use materials that have a “minimum negative impact” on the environment and society, and to produce the items using less water and energy per unit.

According to the document, 73% of companies producing FIFA-certified footballs have either ISO 9001 (quality management), ISO 14001 (environmental management) or ISO 45001 (occupational health and safety) certification. And it’s not just footballs on Addiechi’s radar.

“We’re also assessing the impact of artificial turf – how it’s produced and recycled. We did a test last year with this particular pitch,” he says, pointing to the playing surface out of the window, “and we recycled it. We want to integrate this into the requirements for production for all equipment that carries the FIFA label. They are licensed FIFA products so we have leverage. That’s the way we see ourselves in leading the effort in the world of sport.”

When Addiechi arrived at FIFA 16 years ago, CSR and sustainability initiatives were “ad-hoc and reactive”, with satellite projects around the World Cup instead of comprehensive sustainability reports and strategies. And although he acknowledges there’s a “long way to go” in achieving what he wants to, the integration of such policies – in accordance with “international standards” – is evidence that FIFA is on the right track.

He adds: “It’s no longer possible for someone, be it Human Rights Watch, Amnesty International, or any other NGO, to throw stuff at FIFA and it sticks. It doesn’t stick any more. They have to be precise about what they are talking about because we now go through an exemplary process. This is what we hear from external stakeholders – that our interventions make sense.”

Does the World Cup have the ability to accelerate sustainable development in Qatar? Are modular stadiums the way towards sustainable sports infrastructure? Let us know in the comments below.