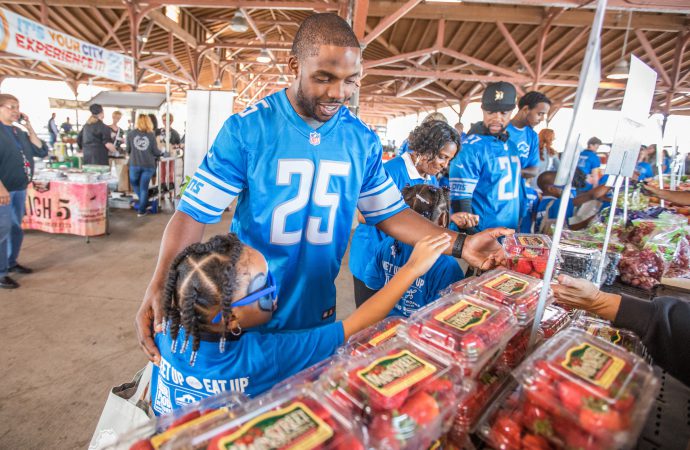 Several sports teams are located in areas of economic deprivation. Some, like the Detroit Lions, are using their profile and resources to provide support and access for people below the poverty line

Detroit. The city synonymous with the car industry and famous for being the birthplace of Motown Records and Eminem, has, in the words of financial news organisation 24/7 Wall St., “long been the poster child for economic decline in postindustrial America.”

Since experiencing a period economic boom during the first half of the 20th century – when almost two million people lived in the city and worked for Ford, General Motors or Chrysler – the years of prosperity have been few and far between over the last 60 years as American car companies struggled to compete with international counterparts and race relations suffered following high-profile riots in the 1960s.

Parts of Detroit’s infrastructure are also in desperate need of investment. Last summer, ahead of the new school year, the water supply had to be cut off at 106 schools (serving an estimated 50,000 students) because of elevated levels of copper and lead. Due to extensive costs, the water supply is still out of order at time of writing.

To provide children with the fresh drinking water they require, the Detroit Public Schools Community District starting a campaign to raise $3.2m to install a permanent filtration system on all water fountains at the schools.

And it will be no surprise to many local people that the Detroit Lions, the city’s beloved NFL franchise, has provided one of the largest donations, offering $125,000 towards the total – with $100,000 coming from the players as part of a new social justice initiative.

Getting involved with social development projects is nothing new for the Lions, a team situated at the heart of a community in need. There has been much talk of an economic resurgence in Detroit over the past year or so, with many large developments earmarked for the city and new businesses being established regularly. But the fact remains that poverty is still a significant issue for a large proportion of Detroit’s population.

‘Poverty stronger than ever’

With its status as one of the most high-profile institutions in the city, the NFL team has made providing support and access to underserved populations its “responsibility”, says Jen McCollum, the team’s senior director of community relations & Detroit Lions charities.

“There’s definitely a resurgence, and the car industry is doing better than it was, but I think the number of people affected by poverty is stronger than ever,” she tells The Sustainability Report. “I was at a drug and alcohol rehabilitation centre last week and they were saying they have seen no change in the number of people coming in before the resurgence.

“We’re headed in the right direction, but the financial strains on people are still there and very real. And I think a resurgence can sometimes overshadow that.”

Access, says McCollum, is the immediate priority for the Lions’ community arm, with so many people in the city unable to attain the education, food and opportunities that most people in the developed world consider basic human rights.

To facilitate this access, the Lions have partnered with seven local charities that specialise in various aspects of philanthropy.

Children – as demonstrated by the school water supply issue – are particularly vulnerable to the effects of challenging economic conditions. Shockingly, a large proportion of students in Detroit aren’t able to enjoy something as basic as recess as many schools don’t have the money for the facilities, equipment or staff to facilitate it.

Playworks, a charity that provides the opportunity for children to take part in physical activity, play and leadership development during recess breaks, is one of the Lions’ charity partners. In 2018, the partnership between the two organisations allowed 7,000 students to enjoy recess.

Keeping children in school can be a challenge in itself, as demonstrated by Detroit’s public high school dropout rate of nearly a third. Economic circumstances, says McCollum, are largely behind these figures.

“Here in Detroit, it’s not uncommon for students not to attend school because they have to take care of younger siblings while parents work multiple jobs. Or they have no money to get to school,” she explains. “There are many financial situations that stop students from going to school. From excelling at school.”

The mission of City Year, another of the Lions’ partners, is to keep as many children in school for as long as possible, by providing mentorship, supporting students in maths and English, and addressing the challenges students have regarding school access.

Funding from the Lions is responsible for the placement of 10 young professionals in a school where students are at the highest risk of dropout so that they can be supported in their education and given the opportunity to continue despite difficult personal circumstances.

“The group we fund is basically an extension of teaching staff,” McCollum explains. “Having City Year members is an added layer of support schools need to help kids get over whatever barriers they’re facing.”

On many occasions, just being able to put food on the table is a mountain to climb for the city’s residents, particularly those who live in ‘food deserts’ – communities that have little or no access to fresh food, with only convenience stores or gas stations offering sustenance.

Detroit, described by McCullom as a “sprawling” city, is one of many US regions with large pockets that have no access to fresh food. More than 23 million people across the country live in low-income areas more than one mile from supermarkets or stores with fresh produce.

Having no access to fresh food is not just about social or economic inequality – food deserts cause serious public health issues, with residents more likely to develop diabetes and obesity. In short, living in a food desert can drastically cut a human being’s life expectancy.

Eastern Market, a non-profit that delivers fresh food to communities most in need, has worked on projects with the Lions to reduce food inequality in Detroit. Indeed, addressing the health problems caused by lack of access to fresh food is one of the flagship sustainability projects developed by the NFL ahead of this weekend’s Super Bowl in Atlanta.

In partnership with sponsor Verizon, the host committee and the local government, the NFL has funded the creation of a ‘food forest’, which covers a seven-acre urban plot and provides fresh produce for local people from vegetable gardens, berry bushes and pecan trees that have been planted.

“Over the next several months it’s going to provide fresh produce at no extra cost for the folks living in that neighbourhood,” Jack Groh, director of the NFL’s Environmental Programme, told The Sustainability Report. “It really is the crown jewel of projects we’ve worked on this year.”

Those surprised by the level of poverty in one of the world’s most economically developed nations should also cast their eye across the pond. A shocking United Nations report published last year revealed the extent to which people are living below the poverty line in the UK.

The nation’s small comparative size means that the food deserts found in the US aren’t as common, but people still struggle to put food on the table. The number of people using food banks (volunteer-run pods where people can collect donated food for free) has increased “almost four-fold” since 2012, with the number of food banks growing to more than 2,000 from just 29 a decade ago.

Despite there being record low unemployment in the UK, 14 million of its 60 million population lives in poverty, mainly due to insecure jobs (such as zero-hours employment with no benefits or security) and a national minimum wage that, in the opinion of many experts, “doesn’t equate to a living wage.”

In a case of unfortunate timing, the UN report was published the same week it was announced that Richard Scudamore, the outgoing chief executive of the Premier League – England’s top-level professional football league – would receive a £5m “farewell bonus”, with all 20 Premier League clubs contributing £250,000.

It could be argued that the Premier League clubs are private businesses, at liberty to spend their money the way they see fit, and that Scudamore did an excellent job in maximising commercial opportunities for the league. However, the two pieces of news, juxtaposed together in the national consciousness during the same week, illustrated the disparity between the haves and the have-nots in the UK.

But it’s also fair to say that, like the Detroit Lions, several Premier League clubs do a lot of work in trying to alleviate poverty in their communities. Current league leaders Liverpool FC, neighbouring Everton FC, and London-based Chelsea FC and West Ham United are all accredited living wage employers, meaning that they pay a voluntary £8.75 per hour (£10.20 in London) compared to the legal minimum wage of £7.83.

“Supporting the living wage is quite simply the right thing to do; it improves our employees’ quality of life but also benefits our business and society as a whole,” said Everton chief executive Denise Barrett-Baxendale when the club signed up to the initiative in late-2016.

Liverpool (where Everton FC is based), like Detroit, has areas of significant poverty. Around 20% of children live in poverty and the city has one of the lowest employment rates in the UK. As well as supporting local people with the living wage (75% of Everton employees live in the surrounding community), both Everton and Liverpool FC have extensive community projects.

The former supports around 2,000 local charities per year, has a People’s Hub, provides business development advice and even facilitates cost-effective legal aid for people struggling financially. The Liverpool FC Foundation is heavily involved in the Premier League Works initiative that tries to engage young people who are not in education, training or employment.

Through Premier League Works – a scheme supported by a number of clubs – disaffected young people are offered 12-week programmes that help with CV development, interview technique, teamwork and confidence building – all crucial aspects to gaining and keeping a good job and staying above the poverty line.

In times of recession, or in places of economic hardship, it’s easy to look at the money generated by professional sports teams and players through a prism of outrage and envy. But, as demonstrated by the Detroit Lions and others, the profile of these teams and sportspeople can often create a positive economic and social impact for the communities that surround them, if the right partnerships can be developed.

How else can professional sports teams and organisations help to alleviate poverty in their host communities? Which other sports entities are doing a particularly good job in this regard? Let us know in the comments below.