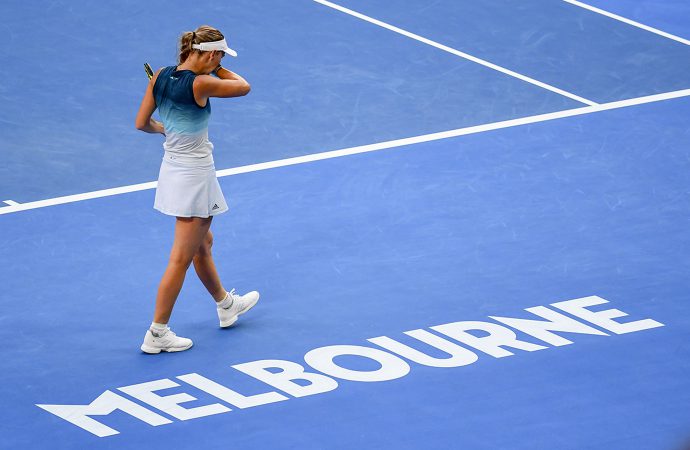 As Melbourne gets hotter and drier, the organisers of the year’s first Grand Slam are aiding the city’s climate change fight by hosting a sustainable tournament

It looks like the first week (at least) of this year’s Australian Open will be another scorcher. Players harbouring hopes of easing themselves into the tournament, thus keeping themselves fresh for sterner tests in later rounds, will be greeted by temperatures of 35°C-plus. Many first and second round matches will become fights for survival.

January is traditionally a hot month in Melbourne and players will, more or less, be prepared for the conditions. But organisers will be hoping to avoid repeats of 2014 and 2018. During the latter, France’s Alize Cornet required medical assistance after falling ill, while five years ago the heat was so strong that Canadian player Frank Dancevic started to hallucinate during a match.

Last year was, in fact, Australia’s third warmest on record. Worryingly for the nation – and tournament organisers – is that nine of the 10 warmest years on record have occurred since 2005, according to the Australian Bureau of Meteorology. Australia is getting hotter. And the significant weather events that happened over the last 12 months could be a sign of things to come.

Victoria, the home state of Melbourne (where the first Grand Slam of the year is played annually), declared a state of emergency due to raging bushfires for the second year in a row.

These events, catalysed by global warming, prompted the City of Melbourne to launch its own Climate Change Mitigation Strategy 2050 last month, which aligns with the goal of the Paris Agreement to keep the global rise in temperature below 1.5°C. In 2018, Australia’s average maximum temperature was 1.55°C above the 1961-1990 average.

The Climate Change Mitigation Strategy is based on four key areas:

To be successful in its attempt to turn the tide on climate change, the local authority has called on citizens and businesses alike to take “collective action”. Event organiser, Tennis Australia, and the Melbourne & Olympic Parks venue operator are keenly aware that the future success of the Australian Open is intrinsically linked to climate change. If the city continues to heat up, there will be some serious considerations for players, fans and tennis administrations to tackle.

As such, the organisations have made sustainability a priority, labelling the tournament a ‘Green Slam’ and establishing a number of initiatives that align with the City of Melbourne’s strategy.

With Australia experiencing one of the warmest and sunniest climates on earth, it made sense for Tennis Australia to plump for solar power when it came to investment in renewable energy. Solar arrays have been installed on the roofs of the National Tennis Centre venues (Rod Laver Arena, Hisense Arena, and Margaret Court Arena) and Tennis HQ to harness this energy, while smart solar power lighting systems have been integrated around the Melbourne Park facility, in the Grand Slam Oval, The Green and around the Australian Open Festival.

The Margaret Court Arena, redeveloped by sports architect Populous as part of Melbourne Park’s wider transformation, was awarded LEED Gold certification (the second highest accolade bestowed by the US Green Building Council after Platinum) for its sustainable design. In doing so, the venue became the first sports facility in Australia to win that level of certification.

The Margaret Court Arena was recognised for its sustainable innovation and access to public transport (Credit: Populous/Ethan Rohloff)

It won six out of six points for sustainable innovation (with the installation of a cool roof that reflects the sun’s heat) and was recognised for sustainably sourcing its timber, as well as its energy efficient lighting and cooling systems.

The arena was also awarded six points out of six for its public transport access and waste recycling process during the construction period – both of which chime with Melbourne’s overall climate plan.

With around 750,000 spectators expected for the tournament, waste management is high on the agenda for the organiser and venue operator. According to Tennis Australia, 92.5% of all waste generated will be recyclable – up from 89.1% last year.

This will be helped by a couple of new initiatives devised for the 2019 edition of the event. Firstly, the Australian Open fan shop will no longer stock single-use plastic bags. Water bottle refill stations have been integrated at several sites, and spectators will be encouraged to get involved in recycling efforts at coffee cup sorting stations (that provide a recycle stream for plastic-lined coffee cups). Recycling bins will be located around the site with clear labelling.

To step up recycling efforts further, Tennis Australia – a founding member of the Sports Environment Association – has partnered with waste experts Cleanaway to sort trash into recycling streams.

In addition, there will be no single-use plastic straws offered with beverages, saving more than 150,000 units. However, biodegradable straws will be available on request. Beer and spirits will be served in aluminium cans (easier to recycle) rather than plastic cups, with drink trays and other plastic cups manufactured to be recyclable.

All paper plates and napkins are made from recycled materials and cutlery is either biodegradable plastic or recycled bamboo.

Surplus food will also be redistributed to people in need in partnership with Australian food charity OzHarvest.

One of the more concerning findings from the Bureau of Meteorology’s Annual Climate Statement was that, as well as the increase in intense heat waves, the amount of rainfall is decreasing. In fact, rainfall in 2018 was 11% below average.

It’s no surprise, therefore, that much of the Australian Open’s sustainability plan refers to water usage and preservation.

Again, this was an area in which the Margaret Court Arena performed well, accruing six points out of 10 for water efficiency, with maximum points for innovative wastewater technologies and water use reduction.

One of the major projects within the larger Melbourne Park redevelopment was the installation of 4.5 megalitre capacity water tanks underneath the Grand Slam Oval, which supports the park’s water harvesting system by collecting water for irrigation of nearby areas and for toilet flushing within the arenas.

Venues, such as the Margaret Court, the Rod Laver Arena (which is currently in the process of being certified by the United States Green Building Council) and Tennis HQ have their upper-level toilets connected to a rainwater collection system, designed to reduce the use of mains water for toilet flushing.

Indeed, water usage has decreased by 25% since 2008. During the 2018 edition of the tournament 19 million litres of water was saved.

What other sports events or tournaments are contributing to their city’s/country’s fight against climate change. Let us know in the comments below.