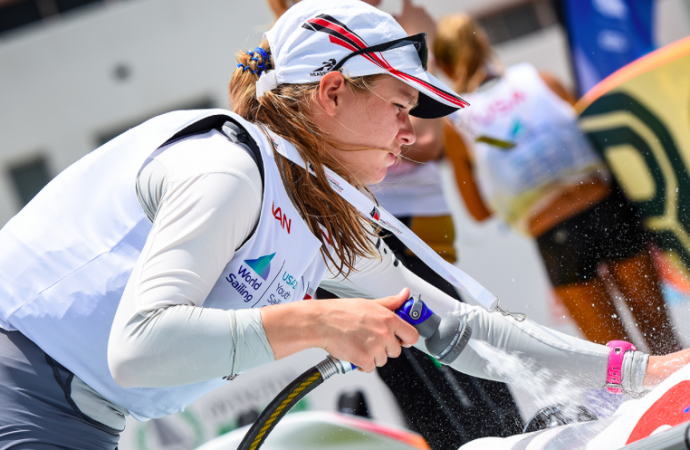 At the World Sailing Awards 2018, Corpus Christi Yacht Club became the first winner of its Sustainability Award. Its efforts to green the Youth Sailing World Championships (hosted between 14-21 July 2018) caught the eye of judges, and was referenced by the governing body’s sustainability manager Dan Reading as the “benchmark” for future World Sailing

At the World Sailing Awards 2018, Corpus Christi Yacht Club became the first winner of its Sustainability Award. Its efforts to green the Youth Sailing World Championships (hosted between 14-21 July 2018) caught the eye of judges, and was referenced by the governing body’s sustainability manager Dan Reading as the “benchmark” for future World Sailing events. Co-chair of the event’s Green Team Elizabeth Kratzig tells The Sustainability Report how it was done.

In 2015, Corpus Christi Yacht Club (CCYC) in Texas was awarded the 2018 Youth Sailing World Championships. For Green Team co-chair Elizabeth Kratzig, the announcement was all the more special as her hometown club had secured the competition she travelled to Scotland to compete in in 1991.

Kratzig’s thoughts quickly turned to ocean conservation and sustainability. After starting with the aim of hosting an event with no plastic water bottles – an ambition that was unexpectedly dubbed “low-hanging fruit” by sustainability partner 11th Hour Racing – she started to work on a robust sustainability and legacy strategy with the goal of making the event the benchmark by which all other World Sailing events would be judged.

As well as setting targets for water consumption, carbon emissions and waste, the Corpus Christi Yacht Club Green Team tried to engage volunteers, sailors and crew members so that its message could spread throughout Corpus Christi and beyond.

“One of the most interesting parts of the story is we didn’t really know what we were doing to begin with,” Kratzig tells The Sustainability Report. “I started out by talking to different organisations and people, like Sailors for the Sea, 11th Hour Racing and Brian McCullough (the Seattle University professor specialising in sport and sustainability). It helped us gain a lot of knowledge.”

CCYC formed its ‘Green Team’ and began thinking about its environmental footprint and how it could be mitigated. The team started to realise “how critical every decision is” and made two important steps to achieve its goals: putting together a sustainability strategy and engaging partners to help deliver its ambitious blueprint.

The strategy was predicated on getting buy-in from the event’s volunteer force (practically everyone involved with organising the event was a doing so on a voluntary basis apart from payroll staff at CCYC), while payroll staff were asked to attend a mandatory education session in which they were asked what they could do in each of their jobs to make the event as sustainable as possible.

And to encourage cooperation Kratzig dangled a mighty carrot in front of staff and volunteers: the prospect of achieving platinum level in the Sailors for the Sea’s Clean Regatta programme.

“They all really rallied behind the idea of making platinum level and it was a goal for the entire club,” she says.

To reach platinum level, CCYC was required to follow “best practices” in recycling, composting and wildlife protection. Only two events had previously achieved platinum level, but the ambition was one of four key sustainability goals set out in the strategy (see below).

Kratzig’s original ambition – to host an event with no single-use plastic water bottles – made up part of the team’s focus on reducing negative environmental impacts. Competitors, coaches, race committees and volunteers were told to bring reusable water bottles that could be filled up by four hydration machines that were installed at various points on site.

And she credited the work done by volunteers to make sure the Green Team’s landfill diversion plan was implemented. Waste stations had three containers (for compost, recycling and landfill), and volunteers diligently patrolled those units, making sure spectators used the correct bins.

However, finding the right composting solution proved to be one of Kratzig’s biggest challenges. A plan to serve food on crockery plates was scrapped just two months before the championships began, leaving the Green Team scrambling around for an appropriate composting partner.

“The closest industrial composter that would take on the project was two hours away in San Antonio – and we had to agree to less than 3% contamination,” Kratzig explains. “That means we had people at every single waste station hand sorting through a lot of waste.”

As Kratzig was devising the sustainability strategy, she turned to a friend of her father’s, a marine biologist, for counsel. He put her in touch with the Corpus Christi Art Centre, which became one of the Green Team’s “most valuable partners”.

The pair teamed up to promote the sustainability initiatives occurring at the Youth Sailing World Championships, even hanging a huge chandelier made out of plastic bottles at Corpus Christi Airport to boost awareness.

“Partnerships were useful and helped us instill passion in the local community,” says Kratzig.

During the championships the Green Team also surveyed competitors, volunteers, crew and race committees to gauge their appetite for sustainability initiatives at key tournaments.

In addition, renowned marine biologist Dr. Sylvia Earle was invited to speak at the championship’s opening ceremony to discuss her knowledge of sustainability and conservation. Her talk was witnessed by 900 people, and formed a key part of the education programme developed by the Green Team.

Seven regional organisations set up conservation booths around the site to engage people involved in the event. Two beach clean-up events were also scheduled and involved volunteers removing trash from the local beach and posting their progress on social media to “educate the public”.

Despite starting with little knowledge and developing the sustainability plan just 18 months before the championships began, the Green Team achieved some seriously impressive results. A successful composting strategy helped the event divert 89.8% of its waste away from landfill – just 0.2% short of the threshold needed to achieve zero waste to landfill status.

Recycling (58.3% of waste) and composting (31.5% of waste) saved 22 tonnes of carbon emissions. And CCYC’s zero tolerance on single-use plastic water bottles avoided the use of 65,000.

Survey results also painted a positive picture. More than half (53%) of those receiving the survey in their email inbox responded, with 88% saying that the sustainability focus enhanced the event, while 96% suggested that they wanted to see sustainability initiatives at all sailing events.

Kratzig points to a couple of areas of improvement: the Green Team could have worked out if the sustainability focus contributed to an economic gain. The team also found it hard to collect energy consumption data as the relevant stakeholders declined to provide that information.

But with Dan Reading claiming that the event was the benchmark for World Sailing events going forward, the Green Team will be proud of its achievements.

“I also think the benefits for Corpus Christi were quite large,” says Kratzig. “I’ve had three different event organizers contact me about how they can make their events more green. The fact that people are thinking about it is a start.

“It would be good for Corpus Christi to have its own Sustainability Commission that also looks at social aspects of sustainability as well as environmental ones. That would be a huge goal for the city.”