Viacheslav Fetisov: “No one will benefit from climate change – everyone will suffer” 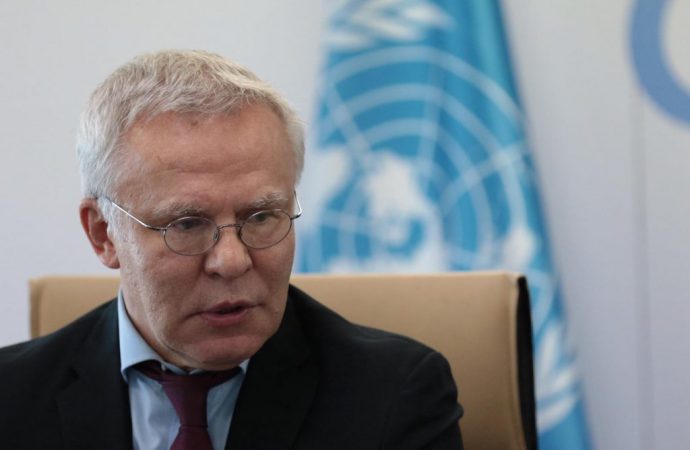 After carving out one of the greatest-ever careers in professional ice hockey, Viacheslav Fetisov is ready to take on his biggest challenge – helping to save the world from climate change. He talks to SSJ

“People need to unite around the biggest challenge we’re all going to face. They need to realise that local conflicts are not that important. That not one country can do it by itself. We need everybody to be on the same page. Without being united we cannot fix the problem.”

Almost like a coach instructing his players during a time out using a delicate balance of cool-headed logic and inspiring charisma, Viacheslav Fetisov is intent on spreading the word about the perils of climate change around the world. The message is clear: we’re heading into the last period, the chips are down, and the world needs to perform.

If one man can demonstrate performance under pressure it’s the legendary ice hockey player from Moscow. After leaving the Soviet Union in controversial circumstances in 1989 to pursue his dream of playing in the US, Fetisov took the National Hockey League by storm. He added back-to-back Stanley Cups to Winter Olympic and World Championship gold medals, and is widely recognised as one of the most talented hockey defensemen the world has ever seen.

To cement his name into the sport’s folklore, Fetisov was inducted into the Hockey Hall of Fame in 2001. But his biggest challenge lies ahead.

Becoming a sporting legend would be the pinnacle for most people. Indeed, Fetisov achieved more on the ice than some even dream of (that’s before mentioning a political career that took him to the top of Russia’s sports ministry). But not content to live off past glories, Fetisov wants to play his part in saving the planet from certain catastrophe using the medium that he knows best – hockey.

Next April, Fetisov will lead two teams of ice hockey players and sporting personalities out on to an ice hockey rink in the Arctic Circle to play what he has dubbed the ‘Last Game’ in order to raise awareness of the irreparable damage being done to the region as a result of climate change.

I skated in Moscow in the 60s and early-70s from October until the second half of April. Not any more. You’re lucky if you get ice outside for one month around New Year

The image of a polar bear perched on an ever-dwindling piece of ice is synonymous with the warnings about the ice caps melting, if a little cliché. But worryingly, scientists now believe that if the planet continues to warm at its current rate the Arctic could be iceless by 2040.

And the repercussions for the whole planet would be dire.

“I skated in Moscow in the 60s and early-70s from October until the second half of April. Not any more. You’re lucky if you get ice outside for one month around New Year,” says Fetisov, who is also the United Nations Environment patron for Polar Regions.

“It’s affecting everybody – in Scandinavia, America. Mike Richter (the American Hall-of-Famer), who grew up in Pennsylvania near Lake Placid, told us the winter isn’t like it used to be. And look around the world – there are an increasing number of natural disasters and catastrophes, and they’re all related.”

Fetisov shared a stage with Richter during the Sport and Climate Change Summit in New York in September when the pair were discussing the effect global warming was having on the game of hockey. According to the NHL, the length of the skating season may decrease by one-third in eastern Canada and 20% in western Canada (hotbeds for the sport) in the coming decades, reducing the playing time for tomorrow’s players and threatening the very future of the sport.

As one of the sports most affected by the changing climate, the NHL is doing more than most to reduce its own impact. Earlier this year, the organisation published a five-year strategy that prioritised the reduction of carbon emissions, the adoption of sustainable practices in ice rinks and fan engagement programmes. Fetisov says he’s “happy with the good example” being shown by NHL leadership.

Lewis Pugh and the Pope

Richter will be among the roster of players taking part in next April’s Last Game, occurring either on the 25th or 26th of the month. Fetisov tells The Sustainability Report that he will unveil the full roster closer to the time, but reveals that one of the people invited to take part is Lewis Pugh, the endurance swimmer who recently swam the English Channel to highlight the damage being done to the oceans by pollution and plastic.

“He came to Moscow to get support from me for the Marine Protected Area (which sought to protect Antarctica’s Ross Sea), and I introduced him to the people who make decisions,” Fetisov explains. “We became good friends and brothers facing the biggest challenge.

“I told him to start skating, but he just finished swimming the English Channel. But he’s an athlete and I think he’ll participate.”

Sauli Niinistö, the president of Finland and the head of the Arctic Council – a group of nations encompassing the region – may also participate after giving the Last Game his support last week. Since devising the idea, Fetisov has also received the blessing of Pope Francis and the leader of the Russian Orthodox Church. He credits “hockey diplomacy” for the progress he’s made thus far, likening it to the ‘Ping-pong diplomacy’ that brought the US and China closer together in the 1970s.

“If you remember, the United States and China started speaking to each other while playing ping-pong,” Fetisov says with a laugh. “But this challenge is bigger.”

I talked to the United Nations secretary general and said that the organisation was probably underestimating the power of sport. It’s the most popular thing on the planet

The Pope was even presented with a jersey, a hockey stick and a puck during a Sustainable Development and Peace event in the Vatican shortly after the Rio 2016 Olympics. The event brought together the heads of various sports organisations, include Thomas Bach, the president of the International Olympic Committee. And while Fetisov is happy with sports contribution to sustainable development, he believes that policy-makers haven’t utilised its power anywhere near enough.

“The main issue is that the United Nations was not using the most practical instrument to unite the people – sport,” he says. “I talked to the secretary general and said that the organisation was probably underestimating the power of sport. It’s the most popular thing on the planet.”

The Last Game, however, is being co-organised by United Nations Environment, and has full buy-in from its head Erik Solheim. Fetisov hopes that the game will encourage governments and other policy-making organisations to adopt resolutions and commitments on climate action.

He also wants to capture the attention of the rest of the world by establishing alternative Last Games using different sports in different parts of the world. The Last Game of basketball, Fetisov suggests, could be played on an island that “scientists predict will be under water” in a few years time.

“We want to bring it to different continents, different religions, different races. No one will benefit from climate change – everyone will suffer,” Fetisov explains starkly. “Four years ago I didn’t think of this problem. We are human beings, we have duties and families. We rarely think about the big picture. But if you’re going to talk about this is in the loudest possible way you have to bring in more people.”

Over the next six months, Fetisov’s attention will turn to final preparations for the Last Game. Scientists on site are keeping his team in touch with the local conditions so that logistics can be worked out. Around 60 people will congregate on the largely uninhabited piece of land for the spectacle, not including the crew setting the rink up, so intense planning is necessary. And the delicate nature of the area means that the players won’t even be able to have a practice match before competing in the real thing.

So that means just one take for Fetisov and Co. to deliver an emphatic message to the rest of the world. And the Russian’s career so far suggests that he will absolutely make it count.