Does professional sport have a role to play in integrating refugees? 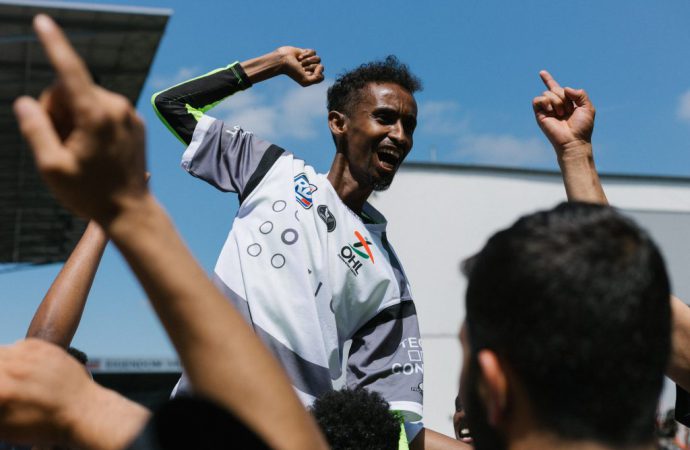 Another refugee team with compete at the 2020 Olympic Games, but a conference in Lausanne next month will explore what more sport can do to integrate displaced individuals

Once, again during the Opening Ceremony of the Summer Olympic Games, a small collection of athletes will march together under the Olympic flag, not the flags of their own nations. Tokyo 2020 will be the second Games in succession where it has been necessary to enter a team made up of refugees and displaced individuals.

The International Olympic Committee (IOC) deserves credit for providing an incredible opportunity for talented athletes who have had to endure such unfathomable suffering. Thomas Bach, the IOC president, probably articulated it best during his announcement at the Youth Olympic Games last week when he said that in an “ideal world” there would be no need for such a team.

But the fact remains that, according to 2017 statistics published by the United Nations Refugee Agency (UNHCR), a record 68.5 million people have been driven from their homes as a result of war, violence and persecution – more than the population of France.

Over the last few years, a number of refugees have made their way to Europe to escape dire circumstances in Africa and the Middle East. In 2015 Europe’s ‘migrant crisis’ reached a peak, with an estimated one million people arriving during a 12 month period.

Although numbers have decreased in the three subsequent years, governments have struggled to integrate new arrivals into society. While many Europeans have empathised with the plight of displaced individuals and families, others have actively voiced their concerns about the volume of people entering their respective nations. Some governments have openly refused to accept their quota of migrants despite being part of the European Union.

Increasingly sport is being recognised as an effective platform for achieving integration. Earlier this year the European Commission called for proposals focusing on using sport as a tool for integration and social inclusion of refugees, with grants and support being offered to the most impactful projects. Grassroots sports clubs, it has been suggested, are potentially one of the first points of contact for refugees entering into a new society. However, many are ill-equipped to accommodate them due to a lack of volunteers and resources, as well as communication issues.

But just down the road from the European Commission, in the Belgian capital of Brussels, the country’s football association has been supporting grassroots and professional football clubs assimilate refugees in their surrounding communities since the crisis began three years ago, demonstrating how professional sports organisations can step in to bridge the gap.

Using funding provided by the Belgian government’s department responsible for refugees and asylum seekers, the Royal Belgian Football Association (RBFA) launched its ‘Everyone on the Field’ campaign. It was designed to encourage refugees and displaced individuals to play football with local people regularly, encouraging close ties and countering mistrust. The scheme also gives refugees opportunities to volunteer at local clubs and take certified coaching courses as their status prevents them taking up full employment.

Many of the 11,000 refugees living in Belgium call asylum centres their home. Most of the 32 pilot clubs involved in Everyone on the Field are based in areas close to these centres. Football, says project coordinator Hedeli Sassi, has been instrumental in breaking down the divide between displaced individuals and locals.

“The only way refugees can be involved in the clubs is as a player or a volunteer,” he tells The Sustainability Report. “So we think about what other skills and competencies the local football club needs. They always need volunteers and are happy for the help. We have one 16-year-old boy who doesn’t like football, but is inspired to be a referee so he referees youth games on a Saturday. We also have a guy from Togo who was a journalist – now he does the interviews and reviews the game for his club.”

While the majority of pilot clubs are amateur, Sassi highlights a couple of professional clubs supporting the cause. Belgian Second Division club Oud Heverlee Leuven, for example, has entered a refugee team in the amateur-league and has been offering refugees voluntary positions at the club in exchange for match tickets, while Westerlo and Gent are also heavily involved.

Sassi will try to encourage other major sports organisations to follow in the footsteps of the RBFA when he tells his story at the ResponsiBALL Forum in Lausanne next month – a conference devised specifically to shine a light on sport’s impact (and potential impact) on the lives of refugees, and how it helps them find their place in foreign societies.

“I want to show them the path we took and the positive things about the project,” he explains. “It’s about admitting there are problems, but showing some solutions.”

Representatives from UEFA, FARE, the Centre for Sport and Human Rights, and the football associations of Scotland, Italy, Ireland and Norway will also be presenting the work they are doing in this area, revealing to some extent the increasingly important role sport is playing – and will continue to play – in advancing sustainable development.

In 2016, the former funded a Greek NGO, Organization Earth, as part of its We Care project to establish a football team comprising of refugees living in camps in Greece’s Attica region. The team gave children and adults living in the camp the chance to interact with local people, reducing isolation and boredom and fostering trust and camaraderie.

The rationale behind establishing the ResponsiBALL Forum, explains steering committee member Marc Probst, is to inject some coordination between the several impactful but fragmented initiatives. Probst’s “ambitious objective” is the development of a coordination mechanism that will allow sports organisations to collaborate on the issue of refugee integration in a more joined up way – although he acknowledges the scale of the challenge is great due to the “highly-politicised” nature of the issue.

“One great outcome would be if certain actors could agree on providing and supporting more capacity building,” he says. “For example, professional sports clubs that would like to work with refugees but don’t know how to. We’d like to organise a follow-up conference to continue concrete discussions and develop a clear agenda in the sport and refugees field over the next five years.

“Most of the people attending the conference will be mid-career professionals, but if we want to embark on a journey characterised by more cooperations, we need senior participants in the room who can sign off on a more strategic agenda.”