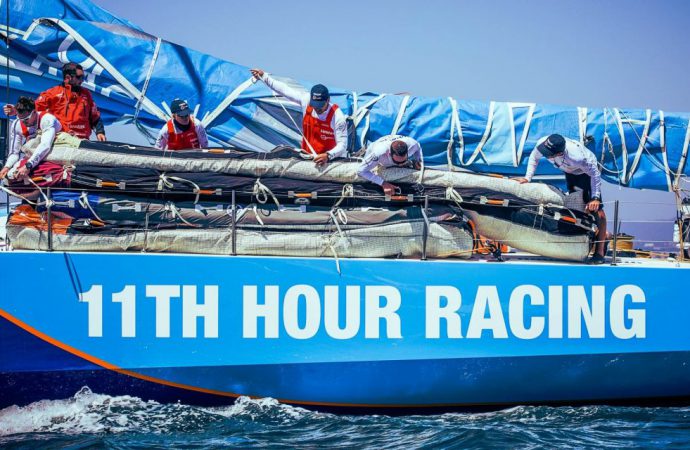 Last week, the team dubbed the 2017/18 campaign’s “most sustainable” published an extensive report highlighting the various sustainability initiatives and results it achieved to earn that status. From carbon reduction and offsetting, to providing grants for smaller sustainability projects, Vestas 11th Hour Racing executed an impactful and thoughtful strategy.

But rather than distract the team from its performance on the sea, Damian Foxall believes the “no compromise” approach to sustainability made the team stronger.

“Our primary objectives were to win the race and present a world-class sustainability programme,” Foxall tells The Sustainability Report. “There were very few cases where there was a conflict of interest between those two goals.

“The team felt that the sustainability initiative integrated had little influence over planning and little impact on performance. In fact, the further we got into the race (which is nine months start to finish) we found sustainability brought a depth and strength to our team.”

Vestas 11th Hour Racing started the 2017/18 campaign well with a number of podium finishes, but after its boat collided with a non-racing vessel (resulting in the death of one of the other ship’s crew members) the team had to retire from the leg. The team got going again and eventually finished fifth, but Foxall says that despite encountering disappointments at various legs other important goals were achieved.

At various stopovers the team took its sailors to visit local sustainability projects and used its positive outreach strategy to connect with the public in different locations. The team was actively involved in the Ocean Summits hosted by Volvo Ocean Race at each of the 12 stopover locations, and used the platform to spread the message of the importance of sustainability and conservation.

During stopovers, all race teams have their own hospitality areas. Vestas 11th Hour Racing called its area the Ocean Exploration Zone and dedicated its content to marine health.

“We have a key role to play as leaders and personalities that inspire young people,” says Foxall, who spent six years working with the Canadian Wildlife Federation. “We have an amazing platform to reach millions of people, so we built up a strong media and communications platform, while team members made regular appearances.”

Team members were offered sustainability training in partnership with the Cambridge Institute for Sustainability Leadership. During the training process, one of the sailors, Tony Mutter, mentioned that he’d read about Dr. Ingrid Visser, a marine biologist and foremost expert on orcas in the southern hemisphere, in an in-flight magazine. A few months later, after the team explored her “game-changing work”, she became the recipients of a $10,000 grant distributed by Vestas 11th Hour Racing.

But more than just reaching out to spread the word, Vestas 11th Hour Racing has made a concerted effort to mitigate its own impact on the environment. It reduced its own carbon footprint by 2.72 tonnes after establishing a ‘Meatless Mondays’ scheme. The initiative also saved 677,000 litres of water.

Where it couldn’t reduce its carbon emissions it offset. Over the course of the nine month race, the team compensated for 1,218 tonnes of carbon by investing in the Seagrass Grow project designed by The Ocean Foundation, which restores habitats like seagrass meadows, mangroves and salt marshes.

Foxall also explains that much of the positive impact it generated was through collaboration with partners and suppliers. After asking clothing supplier Musto to reduce the single-use plastic in its packaging, the company managed to cut 4,000kg of plastic for that project and 11,000kg for the year – reducing its overall plastic use by 70%.

Working with water filtration partner Bluewater prevented the use of 15,987 plastic water bottles, 2,000 litres of fuel and 6.64 tonnes of carbon.

The next edition of the Volvo Ocean Race will commence in 2021, and Foxall reveals that the men behind Vestas 11th Hour Racing, Charlie Enright (skipper) and Mark Towill (team director), want to put another team together with the same focus on elite performance and uncompromising sustainability.

“We will be building new boats, so the challenges are: what they look like, how they’re built, and what are the sustainable practice and mitigation elements we put into place,” Foxall explains.