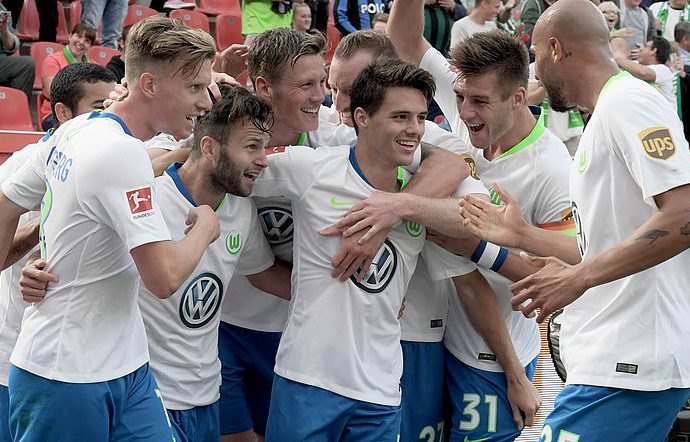 VfL Wolfsburg, the 2008/09 German title winner, was named as the most sustainable club in the Bundesliga. But the other clubs, the league and the German football association are slowly trying to make environmental stewardship the norm

There was a time when being at the top end of the table was par for the course for VfL Wolfsburg. An unexpected title win in 2008/09 under the guidance of hardline coach Felix Magath instigated a short, concentrated period of success for the provincial club from Lower Saxony.

Although the Bundesliga triumph a decade ago remains Wolfsburg’s only top-flight title, the club competed in European competition regularly during the subsequent six years, even winning the DFB-Pokal Cup (Germany’s domestic cup competition) and the German Supercup in 2015, beating traditional heavyweights Borussia Dortmund and Bayern Munich respectively.

It’s fair to day that since adding those two cups to its previously sparse trophy cabinet, the club’s on-field performance has regressed. In both of the past two seasons Wolfsburg needed to win tricky relegation playoff matches to retain its Bundesliga status.

While players, coaching staff and football-focused executives have overseen this patchy period of form since Magath’s men lifted the championship, behind the scenes Wolfsburg has been developing one of the more robust sustainability and corporate social responsibility strategies in European football.

In fact, the last time that Die Wölfe (the club’s nickname) found itself on top of any league – apart from the Frauen-Bundesliga, which it’s women’s team has won for four of the past six seasons – was the Bundesliga Sustainability Index which was put together in 2016 (see left).

Compared to other Bundesliga clubs, Wolfsburg was credited with anchoring sustainability in the leadership of its organisation, reducing its emissions more efficiently on match days, and encouraging its fans to act sustainably.

By the time the Index was published Wolfsburg’s sustainability strategy was reasonable mature. It started in 2010 with the implementation of environmental guidelines and ambitious targets, such as reducing carbon emissions by 25% by 2018 (a target not achieved because of the construction of the AOK Stadion for youth teams in 2015), and the reduction of using natural resources (the club has been using renewable energy in all its buildings since 2011).

Wolfsburg became the first professional team in Germany to switch to LED pitch lighting, Nico Briskorn, VfL Wolfsburg’s director of corporate social responsibility, tells The Sustainability Report, with all club lighting expected to be LED within the next five years.

But Briskorn says his favourite project is one that combines the upcycling of old kits and the empowerment of disabled people in the community. Working with a local NGO, people with physical or mental impairments are offered jobs to make new handmade products for the club shop out of recycled football kits. The Wölfe RE upcycle collection includes women’s clothing and bags, and combines environmental stewardship and social development.

And next week, on 19 September, all players from the men’s and women’s squad, as well as 80 Wolfsburg employees, will spend the day helping 11 NGOs in the region make life easier for disabled people, the economically disadvantaged and refugees.

“We believe that to be a success in football you need to be sustainable. It has an economic value to our club and that’s why we have a strategic approach,” explains Briskorn. “When we started this in 2010 we saw an opportunity to strengthen our relationship to fans, to partners, to sponsors, and maybe even generate new sponsorship through CSR programmes.”

Developing a good image for the club is an important aspect of the plan, saya Briskorn. VfL Wolfsburg is a relatively young club after being founded in 1945, and it’s largely resented by rival football fans in Germany for being wholly-owned by giant car manufacturer Volkswagen. From a traditional point of view, most football clubs in Germany have some element of fan ownership. But there also a lot of anger about the hefty financial backing Volkswagen affords the club, particularly in terms of player acquisition.

On top of that, the club’s owner had to navigate through a very public scandal in 2015 when it admitted cheating on emissions tests in the US. But it would be cynical (and largely wrong) to suggest that Wolfsburg’s work is wholly driven by PR. That, says Briskon, is demonstrated by the “systematic” approach to sustainability that few other clubs have.

“The most important thing for clubs, and the biggest challenge, is the internal anchoring of sustainability and CSR within the organisation,” he explains. “You have the chief executive, you have your own department, an environmental team, a compliance officer. You need target agreements with employees and that’s what we’ve implemented.”

He adds: “We have a code of conduct to make it part of the DNA of the club – once you make it a central part of your DNA you can’t change it.”

Briskorn’s work establishing VfL Wolfsburg as sustainability pioneers in German football caught the attention of the German Football League (DFL Bundesliga) who asked him to join a sustainability working group. As part of that working group, Briskorn has been trying to emphasise the importance of the systematic approach since its first assembly in 2012. But the message has received a mixed response.

“It’s very hard to convince chief executives who are mostly thinking about short-term sporting success,” he admits. “They don’t look at the long-term economic value of a systematic sustainability strategy. Many clubs have improved a lot in terms of working on the environmental aspects. But there are other topics to look at: corporate governance, supply chain management, compliance, health and safety. There’s still a long way to go before professional sustainability management within clubs is normal.”

The DFL Bundesliga and German Football Federation (DFB) are “doing more” to support clubs towards sustainability goals. Last year’s major topic, says Briskorn, was ‘Environmentally Friendly Stadiums’, which can be see in some of the recent projects carried out by Bundesliga clubs and venues.

Berlin’s Olympiastadion, the home of Bundesliga club Hertha Berlin and the German national team, recently became the first football stadium to achieve Green Globe certification – a standard that rates the sustainability credentials of tourist attractions and event locations. Each year the stadium welcomes 300,000 visitors, either football fans or concert goers.

Energy conservation techniques contributed to annual savings of two million kilowatts and service-level agreements with suppliers had to be altered to achieve the certification. The most ambitious aspect was the integration of an absorption chiller, in partnership with Technische Universität Berlin, which transforms heat emitted by the building into a cooling mechanism.

“We worked hard on the award, improved processes over many months and questioned ourselves time and time again,” Christoph Meyer, director of events and communications at Olympiastadion Berlin, tells The Sustainability Report. “We achieved 88% out of the hypothetically achievable 100%. What is important now is not to rest on our laurels, not just to comply with sustainability standard, but to constantly improve on them. We’re going to subject ourselves to an audit every year.”

Werder Bremen, Bundesliga champion in 2004, powers its stadium using 100% renewable energy, mainly from solar power, while the most successful club in Germany, FC Bayern Munich, has a giant facade at its homa Allianz Arena made from 380,000 energy-efficient LED lights. And most clubs offer match tickets that double up as public transport passes to reduce the league’s carbon footprint.

But it’s at the league’s largest stadium, Borussia Dortmund’s 80,000-capacity Westfalenstadion, where some of the most progressive work is happening. This season, the eight-time winner of the Bundesliga introduced a returnable beaker system, aiming to cut down significantly on the plastic use for serving beverages.

The club’s first sustainability report, published in December 2017, revealed carbon reduction as a matter of priority regarding its environmental plan. Since starting an energy conservation campaign with its provider, LichtBlick, Borussia Dortmund has reduced carbon emissions by 25,000 tonnes. The overall aim is to reduce carbon by 81,360 tonnes – one tonne per seat.

Five areas of priority have been earmarked by the 1997 Champions League winner to strengthen its sustainability credentials: energy and climate protection, water and wastewater, mobility, waste and recycling, and use of resources.

Any clubs looking for support or practical advice in the field of sustainability can do worse than seek out the help of the DFB. One of three key goals (see below) referenced in the association’s sustainability strategy is: “engaging as a political lobbyist, offering clubs services and setting an example in terms of environmental and climate protection.”

Working with the DOSB (German Olympic Sport Association), the DFB has developed an ecology advice service clubs can access online. The tool offers practical information and best practice, although the service has been developed principally to aid grassroots clubs in Germany.

Leadership from the main clubs and the football association appears to be on the right track, but Briskorn signs off with a note of caution.

“When we had the first working group assembly in 2012, Wolfsburg and two or three other clubs went to the DFL Bundesliga and said this was an important topic for us, and that we thought it would be an interesting topic for the other clubs. But there are a lot of topics we haven’t even talk about within the working group, so there is still a long way to go.”