European ‘green stadium’ certification being road-tested, from Vienna to Barcelona 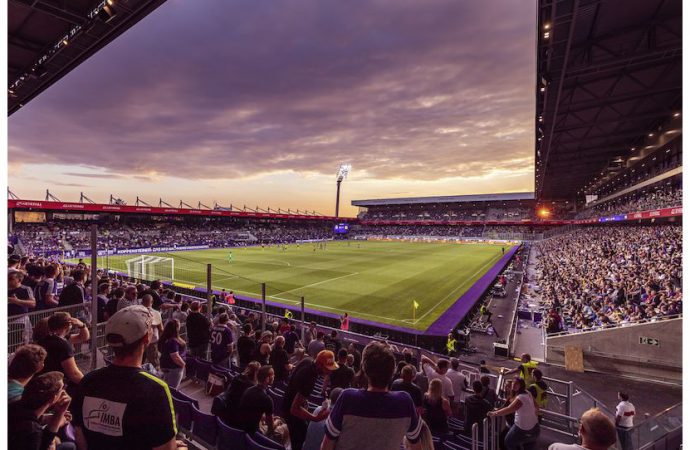 LEED and BREEAM certification have become synonymous with efforts to green sports venues. But a new standard developed in Central Europe is slowly gaining traction

The 2017/18 season wasn’t a vintage one for FK Austria Vienna. A seventh placed-finish (out of 10 teams) and a 4-0 home drubbing at the hands of fierce city rival Rapid is not the kind of return the second most successful club in the country expects.

Red Bull Salzburg may dominate the Austrian Bundesliga – winning eight titles in the last decade – but being 40 points off the pace (and 19 behind Rapid), is unacceptable in the eyes of the fans.

It would be remiss, however, to discuss the club’s poor form without mentioning that for the past two seasons it essentially played every match away from home while its Generali Arena was being rebuilt.

Its temporary home, the 50,000-capacity national stadium named after the legendary coach Ernst Happel, was never a good fit. The biggest crowd last season was just over 15,000 spectators, meaning that it was always at least two-thirds empty. Indeed, of FK Austria Vienna’s 17 victories last season, the majority (nine) came away from home.

So three wins out of three in the newly-built Generali Arena to start the 2018/19 campaign was quite the tonic, providing renewed hope that the team can compete at the top end of the table once again. With a capacity of 13,000, and located in the familiar Viennese district of Favoriten, the new-look venue appears to have made both players and supporters feel at home again.

Benedikt Pultar, who oversees the club’s S.T.A.R Project (stadium, training ground, academy and regional youth centre), talks with pride as he reveals that the stadium will host international matches as well as the Austrian Cup Final in 2019. Overlooking the newly-laid training pitches adjacent to the stadium, Pultar talks The Sustainability Report through the innovative open-plan hospitality area and the legends’ lounge named after the greatest Austrian footballer of all time (and FK Austria Vienna’s favourite son), Matthias Sindelar.

But perhaps the most notable aspect of the shiny new Generali Arena is that it’s the first sports venue to receive green stadium certification developed by the sustainable building councils in Austria and Germany (ÖGNI and DGNB respectively). Similar to the LEED and BREEAM accreditation systems, the Neubau Sportstätten judges the sustainability credentials of stadiums based on a number of criteria.

The criteria set for stadiums and sports venues are similar to that of other commercial buildings, like offices for instance, but have been adapted due to their particular nature. Neubau Sportstätten will look at the light and noise pollution generated by that stadium on match days, for example.

Auditors are still reviewing the credentials of the Generali Arena to give it its final accreditation score, but after making sustainability one of the core features of the building, FK Austria Vienna will be quietly confident of at least achieving the baseline of 50%.

Solar panels installed on the stadium’s roof produce 300,000 kilowatt hours of power per year – taking care of 95% of the facility’s electricity. The system totally powers cooling plates integrated throughout the stadium that ventilates the space more evenly. And a further solar panel system has been built on the roof of the club’s academy.

It’s a significant investment, but one the club expects to recoup through energy savings within five or six years. Heavy investment was also directed towards a rainwater collection system used to irrigate the lawns – a sustainability project “driven by circumstance” with the stadium situated on a hill in one of the wettest regions of Vienna.

Markus Kraetschmer, the club’s chief executive, is largely responsible for the project’s sustainability agenda. He was one of the catalysts for the development of the Neubau Sportstätten green stadium standards after asking ÖGNI to develop a sustainability measurement system for the stadium early in the planning stages.

A working group that included Austrian and German planners, administrators, politicians, architects, schools and universities first got together in 2013 to thrash out the criteria for the standard before drafting the first edition in 2015, just before the Generali Arena was rebuilt.

In fact, the Generali Arena and the Vodafone Arena in Istanbul (the stadium for Besiktas built in 2016) were the first two developments to go through the process, which is being termed a ‘pilot project’ by the councils. Auditors mark each project based on life-cycle assessment, energy use, cost of construction and cost of maintenance, as well as the other criteria, before ÖGNI and DGNB complete an independent review.

The supply chain is also impacted. All tenders have to adhere to strict criteria around emission reduction, impact, hazardous substances, energy consumption and sustainably sourced materials.

“We built the hospitality area alongside the company we hire for catering,” explains Pultar. “They wanted the wood for the flooring to come from South America. But the certification programme said we couldn’t source products from more than 400 kilometres outside of Vienna. So the wood is now from Styria (southern Austria).”

ÖGNI and DGNB hope that Neubau Sportstätten can become the go-to sustainability standard for construction and redevelopment projects in sport throughout Europe. The standard is currently being used as part of a wider certification process DGNB is undertaking for the redevelopment of the Camp Nou, the home stadium of FC Barcelona.

Transforming the current stadium into a 105,000-capacity venue is a significant job in itself, but the project has the added complexity of developing the large car park outside the stadium into the Espai Barça – a pedestrian space with a hotel, eateries and the Camp Nou Experience museum. The DGNB certification process will not just look at the sustainability credentials of the stadium – but the whole development.

“At FC Barcelona we’re not in the business of certifying the stadium as a first priority,” the club’s director of real estate, William T. Mannarelli, tells The Sustainability Report. “We are far more interested in certifying the campus as an urban cluster inside one of the densest cities in Europe. DGNB’s approach is related to urbanism, to the campus. To open spaces and the public realm. That’s the reason we chose that particular certification system rather than LEED or BREEAM.”

Drees & Sommer, the Stuttgart-based engineering firm, is guiding the project team through the process and helping them achieve key performance indicators related to carbon, materials and recycling. So far, the project has received Gold status for its pre-certification stage. Final certification will not be achieved until after the whole project is complete – which will take at least five years.

“This is a long approach. It’s a sensitive approach,” says Mannarelli. “The fact that we’ve decided to live with the existing stadium, maintaining 60-70% of the structure, shows a sustainable attitude. The Camp Nou is a little bit like Frankenstein. We do things to it a bit at a time. But with that you keep the past alive and make a sustainable future possible.”

With the project’s completion still a long way off, Mannarelli won’t speculate about the outcome of the certification process. He reveals that the project team is looking at various energy options like solar power and innovative technology that captures the energy from people walking before turning it into electricity. However, he’s clear that any work related to sustainability must make sense for the project as a whole.

“We don’t want to be one of these clubs desperate to have a medal,” he says. “We want to create a campus environment that is about stadium infrastructure, but also about our roles and responsibilities to the public realm. It’s not about putting a fancy sticker on a building – we’re trying to go well beyond labelling a categorisation. And DGNB’s approach speaks to that.”