From Atlanta to Kenya: How the MLS is using its All-Star game to accelerate sustainable development 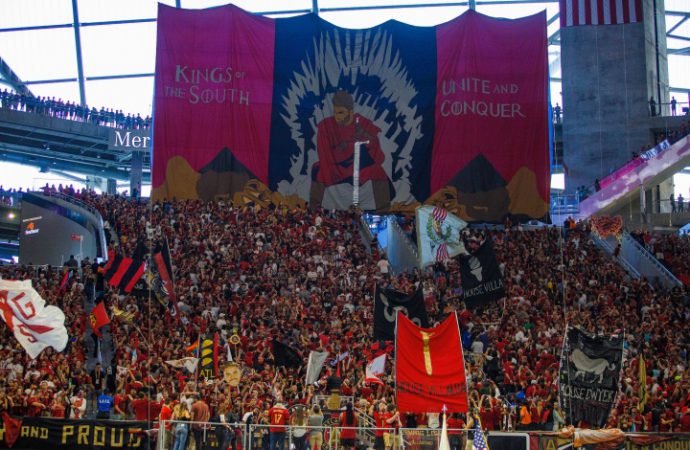 As the MLS All-Stars play Juventus at the Mercedes-Benz Stadium, communities from the venue’s foothills to the Third World will feel the effects

In the mind of many Americans, Atlanta’s Westside holds an undisputed historical significance for its role in the civil rights movement. It was the base from which Martin Luther King Jr and other civil rights activists fought for the liberties not yet afforded to African Americans. Liberties largely taken for granted by all in the US today.

In the years since his passing, however, the neighbourhood has become synonymous with more negative traits: poverty, crime and abandoned housing. His final home on 234 Sunset Avenue (which he moved into with his young family three years before he was assassinated in 1968) is no longer the middle-class community he knew.

An area heavily populated by African Americans, more than half of all houses in the Westside are vacant or dilapidated, while 43% of families live in poverty.

It was a sight that Gil Frank couldn’t fully comprehend after he was sent there from his “affluent” part of the city to campaign for Barack Obama during his first presidential run in 2008.

“Close to election day they asked us to help get the vote out and sent us to this neighbourhood,” he says. “We saw the devastation and disinvestment, and as a group of volunteers we decided to stay.”

Shortly after their visit, Historic Westside Gardens was established by that group of volunteers, motivated by a desire to create a lasting positive impact in a community so neglected. Its purpose is to teach economically disadvantaged people how to grow their own food, so they could eat healthily without worrying about the grocery bill.

And after turning 140 Westside gardens into urban farms, HWG has become one of the handful of organisations Major League Soccer is supporting in a bid to expand its own sustainability operations.

Using its All-Stars game against Italian champion Juventus as a hook, the MLS appears intent on showing the world its increasing commitment to sustainability. As the Westside resides in the shadow of the venue that will host the showpiece match – the newly-built Mercedes-Benz Stadium – it’s only fitting that organisations that serve the community, like HWG, are involved.

But there’s more to the story. Arthur Blank (owner of MLS franchise Atlanta United and the NFL’s Atlanta Hawks – who play home games at the new venue) was celebrated for his vision for the stadium. The stadium has a seal of environmentally sustainable excellence after receiving a LEED score of 88 – making it the first LEED Platinum sports stadium in the US and the benchmark for all future facilities.

Home Depot mogul Blank is also credited for the extensive philanthropic work he does for the local community as part of the Blank Family Foundation. But Frank explains that not all the local people were thrilled when the development was originally announced.

For one thing, they were concerned about the increased prospect of flooding as a result of its construction (the Westside of Atlanta is particularly susceptible to floods), and the threat of gentrification and displacement.

To address the former concern, the developers integrated an innovative stormwater recycling system in the Mercedes-Benz Stadium, which contributed to the project achieving all available water credits on the LEED scorecard.

Funding was also provided to build a new park across the way from the stadium (named the the Rodney Cook Sr Park after the white congressman who added his weight the civil rights movement), which includes a sophisticated pond system that guards against flooding.

Poverty in the area is still rife, but Frank tells The Sustainability Report that the “significant” $10,000 donation from the MLS (which accounts for a tenth of HWG’s annual budget) will help a further 60 families become partially self-sufficient via training delivered by the organisation’s ‘Garden Angels’ to grow their own produce.

Soccer-loving Frenchman Gil has high hopes for the partnerships beyond the All-Star game. He’s passionate about the neighbourhood and its historic roots stemming from Martin Luther King Jr and the civil rights movement. He almost sounds like he’s channeling Dr King when he begins: “We had a dream to have a garden laid at the stadium to demonstrate our work, but because the Super Bowl is being staged there in February it wasn’t possible.

“But I would like to continue to develop a relationship with Atlanta United. I would like people who want to support youth and families to look at our classes, our opportunities to grow food and see how sustainable it is.”

It’s not just food poverty that disproportionately affects African Americans in Atlanta and other metropolitan areas. A study by Duke University student Greg Cooper, Durham’s Urban Forest: Living in the Shade of Injustice, found that just under 400 miles away in Durham, North Carolina, less trees had been planted in areas regarded as ‘poor’ or ‘black’ as a knock-on effect of controversial policies devised by the Federal Housing Authority between the 1930s and 1960s. This is likely to have been mirrored in cities across the south.

In the grand scheme of things – when it comes to racial and economic inequality and social justice – this may seem a fairly minor quarrel . Trees, however, are fundamental to our health and wellbeing – and, as it turns out, the economy. US Forest Service and University of California at Davis research shows that urban trees deliver $1bn worth of benefits per year due to providing shade, sucking pollution out of the air around us, retaining stormwater and boosting the value of houses.

Although the exact location has not been decided, 200 trees will be planted in an area of need in Atlanta as a result of a partnership between the MLS, Trees Atlanta and Urban Offsets.

The latter organisation was introduced to the MLS through Swiss offset organisation South Pole, and will act as the “funding mechanism” for the project. Describing its focus as “building climate resilient communities”, Urban Offsets has a portfolio of projects in various US cities around tree planting, disaster relief, wetland mitigation and flooding. Shawn Gagné, founder and chief executive of Urban Offsets, explains that its partnership with Atlanta Trees will help to develop metrics that solidify the argument that trees are crucial to a city’s landscape.

“Trees Atlanta will take care of the trees annually and has software to track the growth of the trees and what maintenance they need,” he says. “That allows us to develop scientific models for urban forests. There’s not any data for urban forestry growth. All tree growth models are based on rural species, so first off we don’t know how urban trees sequester carbon.”

He adds: “We know that just taking care of the tree annually for the first five years increases carbon sequestration by as much as 60%. So long as we’re doing that we can be confident of a multiplied affect on the city, and the planet.”

When Juventus walk out onto the pitch at the Mercedes-Benz Stadium, fans in attendance will no doubt be disappointed that the club’s new signing Cristiano Ronaldo – generally recognised as one of the two best players of his generation alongside Lionel Messi – won’t be taking the field.

Resting after his unsuccessful exploits at the World Cup in Russia and a subsequent personal tour of China, the world’s richest footballer was only just able to join his new Bianconeri teammates for preseason training. When he does eventually pull on the jersey of his new team, the eyes of the world will be on him.

Or at least the eyes of people who have the means of watching professional football. In the developed world we often take for granted the ability to enjoy pleasures like watching sport. But for many, the notion is an unfathomable luxury.

While the 70,000 or so spectators shuffle into the stadium, ready to watch some of the most iconic sportspeople in the world, miles away in Kenya people are dying from air pollution related to their method of cooking food.

We often associate poverty in Africa with starvation and malnutrition. But for many who do have adequate food, their means of cooking it – either on firewood or inefficient cooking stoves – is threatening their lives and wellbeing.

What the spectators in the Mercedes-Benz Stadium might not realise is that the footballers on the pitch are contributing to reducing air pollution-related deaths just by playing that game. That’s because for all the carbon emissions generated by their travel, hotel accommodation – and the energy the stadium uses during the match – will be offset by the MLS by donating emissions-reducing cookware to the East African country that has the ability to save lives.

As part of a partnership with South Pole and Sport and Sustainability International (SandSI), the MLS has purchased Carbon Credits issued from the distribution of 1,450 cookstoves that are improving the health and wellbeing of around 7,250 Kenyans.

“Cookstove projects have such huge health and social benefits to them,” Michael Malara, key account manager at carbon credits organisation South Pole, tells The Sustainability Report. “We have hundreds of projects, but the MLS really wanted one that had the biggest impact, that was very much aligned with the UN’s global Sustainable Development Goals.

“The project involves CO2 mitigation, and from a science perspective that’s how we need to mitigate climate change,” he adds. “And there are clear health benefits, cleaner air, less indoor pollution and smoke, particularly for the women and girls who do the majority of the cooking. The project is a way to offset emissions of the All-Star game and really invest in substantial social benefits as well.”

Overall, five of the 17 Sustainable Development Goals will be achieved by the project: 1. No poverty, 3. Good health and wellbeing, 5. Gender equality (the cookstoves will reduce the time cooking and collecting wood, meaning that 2,392 women and girls can pursue education and jobs), 13. Climate action, and 15. Life on land.

How footprint is measured

“We took data from the Mercedes-Benz Stadium for electricity consumption and other operational aspects based on a similar event and during a similar time and made a calculation based on that,” Malara explains. “Then we estimate the total number of travellers based on last year’s event and on MLS data, so we can see how many players and MLS staff will go. It’s difficult to know who is flying and from where, so we make very conservative estimates, assume people are flying from a little bit further and make sure emissions are in line with short and long haul flights.”

All three sustainability projects will lead to the MLS expanding its Greener Goals platform, as it seeks to measure and offset its greenhouse gas footprint over a more sustained period of time. With 782 regular league games a season (a growing number because of the expansion teams entering the competition in the coming years), and various cup and All-Star matches, there is scope for the league to make a significant contribution to the lives of disadvantaged people in the US and further afield – and give other sports organisations a lofty benchmark to aspire to.