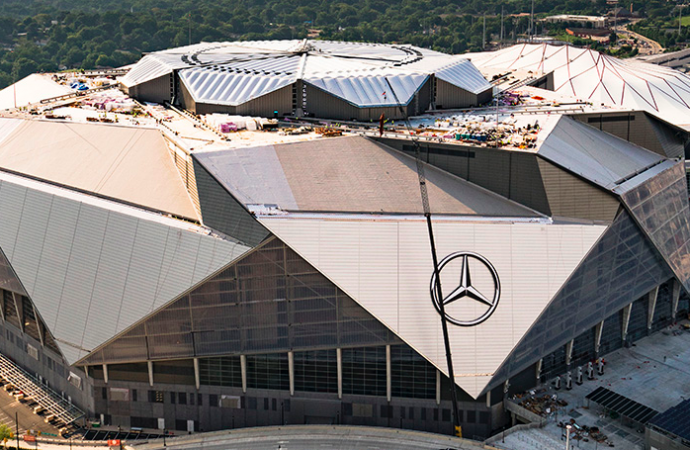 Achieving all water credits – as well as renewable energy and sustainable sourcing – contributed to the stadium’s unprecedented accreditation score. The Sustainability Report talks to Scott Jenkins and Chris DeVolder – the men at the heart of the project

For a few days in September 2009 the rain didn’t stop. At least it didn’t if you were living in Atlanta. Days of prolonged rainfall, culminating in a huge downpour of 10-20 inches of rain during an unrelenting 24-hour period, flooded Georgia’s capital, damaging more than 20,000 homes and businesses. The bill for the damage ended up at the $500m mark.

In the near-decade since, rainfall fortunately hasn’t reached those catastrophic levels. However, the metropolitan area of the city is still prone to flooding, especially in areas around the various creeks flowing through the city.

So when Arthur Blank decided to build the most environmentally-friendly and sustainable sports stadium in the world in the more deprived west side of the city for the two teams he owns – the Atlanta Falcons and Atlanta United – conversations naturally gravitated towards the problems caused by flooding, and how the new Mercedes-Benz Stadium could help ease the burden, particularly as the development was planned close to the notorious Proctor Creek Watershed.

“At our very first sustainability meeting we had the design team, the construction team around a table, and the Falcons were there too. The Falcons were clear that they wanted water to be one of the guiding principles because of where the stadium sits,” explains Chris DeVolder, managing principal of architecture firm HOK. “They understood that the project would not solve all the flooding problems, but maybe it could demonstrate strategies that could be used by others.”

By the end of the project, the stadium had captured all possible water credits (10 out of 10) when applying for LEED accreditation, helping it become the first sports stadium to achieve LEED Platinum, with an unprecedented 88 out of 110 points.

Rainwater capture and reuse, water-efficient fixture and waterless urinals were main feature in a whole list of strategies geared towards water efficiency. The stadium uses 47% less water than baseline standards.

“We talked about it on the very first day and it’s a good example of how setting a pretty lofty goal early and having the right team in place can make it happen, because it’s such a specific problem to that specific neighbourhood,” adds DeVolder.

Making decisions early and standing by those choices was key to achieving the Platinum accreditation says Scott Jenkins, general manager of the Mercedes-Benz Stadium. And Blank’s leadership facilitated such a working environment.

“On a project this complex, in the heart of the city, you’re under pressure. You’re having scheduling challenges, budget challenges – and those challenges can threaten the quality of the project,” Jenkins tells The Sustainability Report. “But Arthur made it clear that we didn’t have to cave to that. If there were decisions that could impact a single LEED point we had to talk to him about it. It was clear that we weren’t going to back off.”

Blank’s foresight on the project, and his approach to “fan-first” food and beverage pricing, saw him recognised as the Sports Executive of the Year at the 2018 Sports Business Awards. But that should be no surprise to anyone following Blank’s remarkable career. After making his fortune as founder of Home Depot, Blank has distributed more than $300m to causes around the US and has become synonymous with social justice.

He is also one of the pioneers of green building development in Atlanta, establishing the first LEED Gold commercial property in the city in 2004.

Gold was initially the certification level the Mercedes-Benz Stadium was going for, but as the project went on, people involved were “becoming intrigued with the idea of Platinum”.

“I don’t know that people initially thought it was possible,” says Jenkins, “but through the design process we saw that we were right there. As the design came along and we did some more calculations on the energy front, it became apparent that we could get more than 80 points.

“That’s what we projected, but you never know until you’re finished. So getting the 88 was a good surprise for us.”

A deal with local energy supplier, Georgia Power, for renewable energy, solar panels and car power stations, helped the project “get over the hump” to achieve Platinum. According to DeVolder, the fact that the stadium was billed as an “iconic project” helped facilitate conversations with suppliers who wanted to be involved.

“What we saw once Georgia Power came aboard was other groups wanted to get involved,” he explains. “Manufacturers saw through the imagery of the stadium that it was going to be iconic and they wanted to be part of it.

“They were willing to develop the reporting procedures around their products to help showcase the sustainable aspects, such as the recycled content of the products, the locations of where they came from. And Atlanta is such a great spot for local materials because there are several manufacturers within three or four hours.”

Jenkins, who is also chair of the Green Sports Alliance, adds: “This building is so high profile. It will host marquee events like the Super Bowl (in 2019) and the FIFA World Cup (in 2026), so it gets more attention than a typical project and you can leverage that. If you’re able to leverage that through supply chains to get a life cycle analysis on some of the material, you can push the envelope a little bit. Find out where their materials come from. Find out their carbon emissions impact.”

The stadium has been open for almost a year (August 2017), but Jenkins explains that the project is still a work in progress.

“I know we have a super efficient building, but we’re still finishing it and commissioning for it,” he says. “It’s a long process. Typically it takes a year or two to shake the building off to get all the systems running right, train our people and get on track with benchmarking what we’ve done.

“From there we can finetune operations and better maintain it. Getting our arms around the building is top of our agenda for the next year or two.”