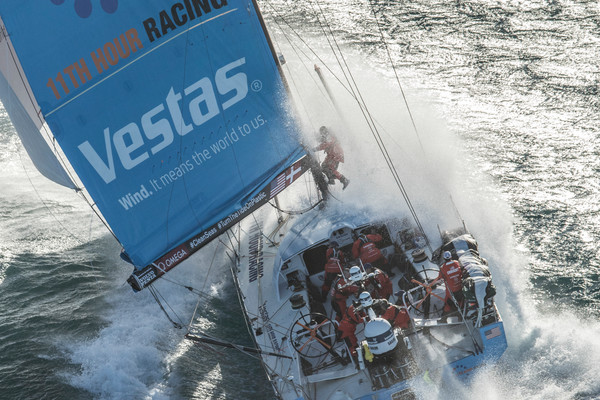 Eight years ago Jeremy Pochman co-founded 11th Hour Racing. It has since become the catalyst for hugely important sustainability initiatives in sailing – and Volvo’s commitment to rid itself of plastic

Mighty oaks grow from small seeds. Just ask Jeremy Pochman. Little did he know eight years ago, when he first had a conversation with a local community sailing programme, that the work they would do together would become the catalyst for one of the largest car manufacturers in the world to ditch single-use plastic.

But that’s what happened. When Pochman, the co-founder and strategic director of sailing and sustainability organisation 11th Hour Racing, began talking with Sail Newport (a public sailing centre in Rhode Island, US) the conversation was initiated by the latter’s need for funding.

Pochman, however, saw the bigger picture, and 11th Hour Racing implemented a sustainability programme that lives on to this very day. In 2015, when Volvo Ocean Race made a stopover in Newport, the work it witnessed inspired the competition to weave sustainability into its core principles.

It is now widely recognised for its work investigating and combating ocean plastics and has hosted Ocean Summits alongside 11th Hour Racing highlighting the issue since 2017.

And Volvo (the title sponsor of the race, and owner up until very recently) was so affected by the partnership’s protection of the ocean and marine life, that it promised to eliminate the company’s use of single-use plastic by 2019.

That’s an estimated 20 million units of single-use plastic per year that will not be needed because of this commitment. Small seeds, mighty oaks.

“That’s a great example of the success we’ve seen in our model of engagement,” Pochman tells The Sustainability Report, before modestly adding: “But we don’t pretend to have all the answers. We have partners that are experts, and we trust and empower them.”

11th Hour Racing, since its inception in 2010, has certainly empowered the competitive sailing world to embrace sustainable practice and ocean stewardship. Volvo Ocean Race and Land Rover BAR (the racing team of Ben Ainslie that recently took investment from British fracking company Ineos) became bastions of sustainable practice in competitive sport with the help of 11th Hour Racing (although Ineos Team UK, formerly Land Rover BAR, has since ceased its relationship with the company). But sailing – despite being intrinsically linked to climate and pollution through its relationship to water – wasn’t always so open, according to Pochman.

“Did teams really view sustainability as a threat to their competitive advantage?” The Sustainability Report asks.

“Very much so,” admits Pochman. “Being deadly serious, no joke at all, when we would approach some of the high-performance racing teams about not using single-use plastic water bottles, they would immediately say, ‘What are we supposed to do? We can’t afford to drink water from the tap on the dock and have our sailors get sick.’

“That was frustrating for us to hear. But we realised we had to turn around and challenge them and say, ‘Great, is there not a better choice?’ Low and behold, some entrepreneurial folks on those teams developed or brought in portable water filtration systems. And sailors weren’t getting sick and their performance wasn’t being affected.”

Pochman is quick to caveat that making better choices for the health of the planet won’t necessarily give a team a faster boat. But attention to detail and making decisions together as a team is conducive to having a successful sailing team, he adds.

“If you make incremental changes, you’re on your way to success,” says Pochman, referencing the company’s tagline – ‘making better choices one degree at a time’.

A significant piece of work that 11th Hour Racing is getting prepared to take on is challenging the once uncompromisable orthodoxies around technical specifications of a boat, such a weight and stiffness, to see if it can be built more efficiently using different materials like carbon fibre.

“We’re looking at the boatbuilding process and trying to create a life-cycle assessment and analysis that looks at every aspect of the build process, check for inefficiencies, checks on material impacts and looks back at what it takes to build a boat to see where better choices can be made,” he reveals.

“This will likely have a direct correlation to cost savings if a team is not using as much of one material,” he adds. “Maybe it’s not a perfectly closed loop, but maybe it can bring inefficiencies down from 30% to 5%, and suddenly that becomes gains for team because the marine industry is incredibly expensive.”

In the more immediate future, though, 11th Hour Racing is preparing to develop future plans for Volvo Ocean Race, which will be owned by Atlant Ocean Racing Spain by the time the next race comes around in 2021. The new owner has pledged to develop the competition’s sustainability programme, and Pochman is hopeful that the partnership will continue.

Work, like its extensive study revealing the extent to which microplastic was infiltrating the ocean, makes Volvo Ocean Race indispensable to the sustainable sport landscape (and the planet), so Pochman’s hope extends well beyond the 11th Hour Racing headquarters.

With the 2017/18 race ending just weeks ago, the new edition is still three years away. And since it only took three years for a conversation with Sail Newport to escalate into a huge single-use plastics commitment from Volvo, you’d forgive Pochman for believing that anything is possible until then.