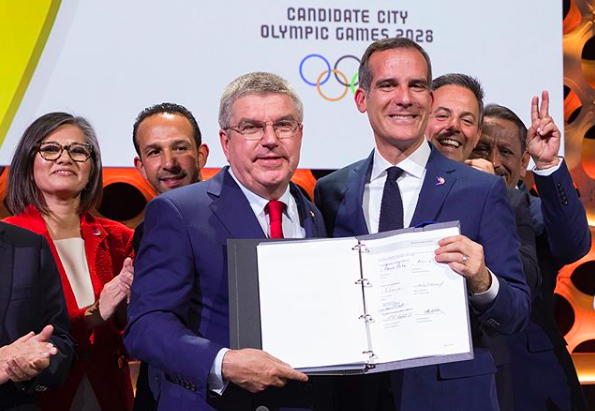 Tim Kellison and Brian McCullough, editors of the Routledge Handbook for Sport and the Environment, will use $10,000 grant to study behaviour change around the LA 2028 Olympic and Paralympic Games

A study to discover the extent to which local residents value sustainability plans aligned with the Olympic Games will be conducted by two of the foremost academics in the sport and sustainability space.

The specific focus of the study, titled ‘Cost and knowledge of LA 2028’s environmental legacy’, will be the 2028 Olympic and Paralympic Games in Los Angeles.

Despite having a 10 year cushion to prepare for the Games – which will require the building of no new sporting infrastructure – the organising committee has already laid out a number of initiatives to make the Games environmentally sustainable, such as a sustainable procurement strategy and significant public transport plans.

Kellison, who co-edited the Routledge Handbook of Sport and the Environment alongside McCullough, said: “Constructing competition venues, housing and roads can have an enormous effect on the environment, and getting athlete, officials and fans to an Olympic city has a significant environmental cost.

“In Los Angeles and in other Olympic cities, local organisers continue to propose ambitious sustainability initiatives in bidding documents and event plans,” he added. “We’re hoping the results of this study can be used to inform the policymakers and organisers of future Olympic cities working to design and deliver an Olympic and Paralympic Games with lasting impacts on their communities and their citizens.”