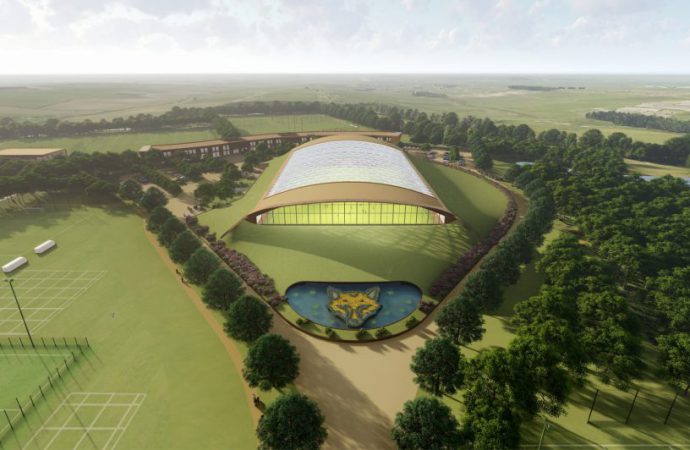 The proposal put forward by Leicester City Football Club to build a new training ground has been accompanied by an ambitious plan to create a “net increase” in biodiversity across the area.

More than 38,000 new trees will be planted on the plot of the former Park Hill Golf and Fishing Centre (the area proposed for the development), if planning permission is approved.

New trees will enhance the 11.23 hectares of retained woodland on the site. Around 4.41 hectares of broadleaved plantation and 14.59 hectares of wildflower grassland will be created, as well as 17 new wildlife and attenuation ponds with a total area of 9,400 square metres.

The 2015/16 Premier League Champion has also pledged to “improve and retain” the Local Wildlife Site close to the proposed training ground.

“The facility seeks to combine the best practice in elite sports training with a celebration of Leicester City’s culture and ethos,” said KSS, the architecture firm behind the facility’s design. “Our designs have been sensitively developed with a full understanding of the existing site context and consideration of the impacts of development on key neighbourhoods and receptors.”

On the sporting side of the design, the complex’s masterplan includes 12 full-sized pitches and various smaller pitches, a full-sized indoor pitch, an integrated training facility building for academy and first-team players (which will have medical, tactical, training and dining facilities), and a 499-seat stand so that under-23s and under-18s can play in a match environment.

The facility will also feature a Sports Turf Academy, which will train the next generation of elite groundsmen and women.