Wind-powered stadiums and 10 million trees: How AFL Architects is putting environmental stewardship at the heart of Turkey’s Euro 2024 bid 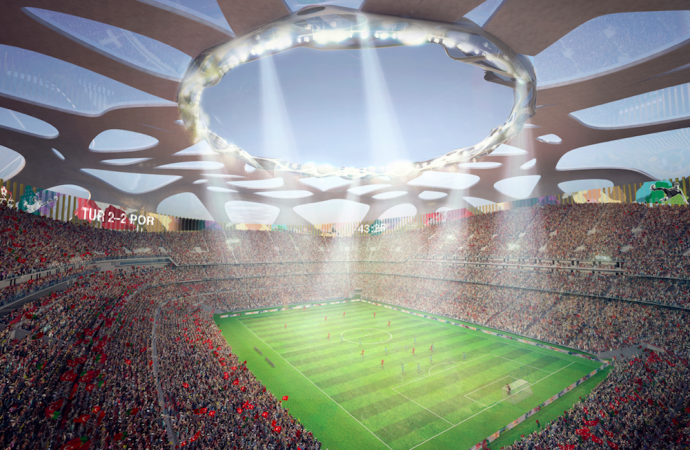 Thirteen years ago, Istanbul’s immense Ataturk Stadium was the stage for one of the most dramatic nights in European football. After going 3-0 down to star-studded AC Milan (boasting the likes of Kaka, Clarence Seedorf, Hernan Crespo and Paolo Maldini) in the first half of the 2005 Champions League final, Liverpool produced one of the finest comebacks of all-time to grab victory from the jaws of defeat and lift the famous old trophy for the fifth time in their history.

As a result, that Liverpool team, the final and the Ataturk Stadium will forever be etched into the memory of fans of a certain generation.

Football fans across Europe will hope to experience the same kind of entertainment when the Champions League final returns to Turkey’s largest city in 2020. And while the locals will be excited about the prospect of welcoming two of the continent’s biggest clubs in just under two years’ time, Turkey has its eyes on a bigger prize that will impact the whole country.

In September, UEFA (European football’s governing body) will decide whether Turkey or Germany will host the 2024 European Championships. A nation synonymous with football, Germany will view the tournament as a mouth-watering prospect, particularly after doing such a good job when hosting the World Cup in 2006.

But after several near-misses – with failed attempts to host the 2008, 2012 and 2016 editions of the tournament, as well as the 2000 and 2020 Olympic Games – Turkey will be desperate to showcase its hosting abilities in six years’ time.

To make that dream a reality, the nation has turned to Manchester-based design studio AFL Architects to help put together a bid. The practice has pedigree in this space: it helped to prepare the successful Poland and Ukraine bid for the 2012 European Championships, and has worked on iconic sporting infrastructure such as Old Trafford football stadium and Turkmenistan’s skyline-dominating Ashgabat Stadium.

To get Turkey’s bid to stand up to UEFA’s scrutiny, AFL has worked on plans for all nine potential host cities and 10 stadiums. But at the heart of the project is modernising the Ataturk Stadium – the centrepiece of the bid – and making it more spectator friendly. And sustainable.

The proposed redevelopment of the Ataturk will happen in two stages: a renovation before the 2020 Champions League, which will include some extra boxes, a larger VIP area and the possible demolition of the running track that hugs the pitch.

But if UEFA gives Turkey the green light to begin preparations for Euro 2024, a full redevelopment of the stadium has been proposed – a design that will harness the “indigenous natural energy” of wind to power elements of the facility.

“We’re calling it wind capture technology, which could be anything from a turbine to actual moving facade elements,” say Marcel Ridyard, senior associate at AFL.

“We did a little internal competition with members of the team to come up with ideas, which we’ve innovatively combined. We’re thinking of designing the outer exoskeleton to work as a wind tunnel that helps funnel the air. And we have a wish to create an inner facade, made of LED bars, that is able to move in the wind. The small movements would be able to generate electricity, but there’s still lots of development work to do.”

The power generated by wind could be enough to power a giant LED screen that makes the outer facade of the stadium, aided by solar power.

This idea of exploiting natural resources in host cities to create renewable energy sources is woven through the whole project, with hydro and solar power being discussed.

“Apart from energy generation we are also considering waste management and trying to reduce recycling as much as possible,” says Angelina Spathopoulou, assistant engineer in sustainability and wellbeing. “We want to reuse and reduce waste. For example, we can donate unwanted materials from equipment or training facilities to smaller clubs.”

She adds: “We’re also talking about the circular economy because it’s important to have a responsible route of procurement for materials from local sources and construction services to come from the local area in each city.”

Rainwater harvesting and storage batteries (that can power stadiums and surround street lights off grid) are also being considered.

But at the centrepiece of Turkey’s sustainability plan for the 2024 European Championships is the pledge to plant a tree for every ticket sold for the tournament to create a 10 million sapling forest in the country.

“That’s their big, bold statement for the tournament,” says Ridyard.

AFL has also proposed the development of an app that will help fans find the most efficient way of getting around Turkey, and moving from site to site with the lowest carbon footprint possible. It will also help with wayfinding because most signage will be in Turkish.

Among other cross-sector projects, the practice is working on Brentford Community Stadium, which is being built for Championship club Brentford. This project is also steeped in sustainability, both environmental and economical. When finished, the venue will be fit for purpose, and able to host conferences and larger events, ensuring increased employment for the area.

Rita Ochoa, associate architect, adds: “We’ll also have something that’s not very common in the UK, which is waterless urinals. We have built water fountains to reduce plastic bottles and we’re making the stadium really inclusive, over-providing on wheelchair space and creating sensory rooms for children and adults with mental impairments.”

That project won’t be complete until late-2019. But until then, all eyes are on Nyon in September when UEFA will confirm whether Turkey have finally been successful in bidding for a championship – and determining whether AFL’s workload becomes a whole lot heavier.