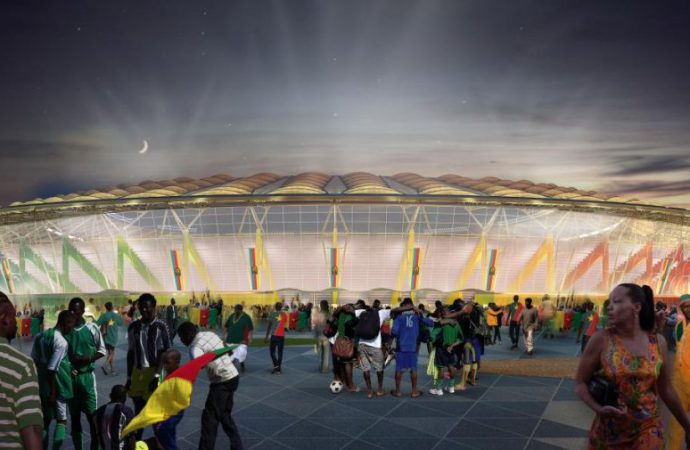 AECOM, the architect and engineer behind the Japoma Sport Complex, puts fan enjoyment and low maintenance ahead of technology and hospitality

Unfancied, and without many of its star names, Cameroon upset the odds to win its fifth African Cup of Nations title in 2017, 15 years after the country’s last triumph in 2002. By contrast, next year’s tournament brings immense pressure, for Cameroon will not only assume the role of holders, but also hosts.

But with less than a year to go, the lion’s share of the responsibility is firmly on the shoulders of the organising committee, as well as the architects, engineers and construction firms preparing the all-important infrastructure the country needs as it gets ready to host is first African Cup of Nations tournament since the early-1970s.

AECOM, the design and engineering firm behind the Rio 2016 Olympics masterplan, is at the heart of tournament preparations, working on a new sports complex in Douala that will play host to many of the matches.

Work on the Japoma Sports Complex began just over a year ago, and with less than a year before the tournament kicks off, it wouldn’t be unfair to categorise the project as a ‘tight turnaround’. Not only will a new 50,000-capacity multi-sports stadium be built on the site, the complex will also include and Olympic-sized aquatics centre, a multi-sport hall to accommodate 2,000 spectators, and outdoor training facilities.

In favour of those working against the clock to have the facility ready is the simple nature of the design, for Japoma is not being built in the high-tech, hospitality-driven mould we’ve come to expect of stadiums in the western world.

“I think the big issue here is what happens when a nation wins and has to deliver a major tournament requiring very large stadiums. How do you manage those facilities in an economically sustainable way in legacy?” – Peter Ayres

There will be very little technology. Food options will limited. It will have an almost non-existent hospitality offering. It’s sole purpose is to give local people a place to enjoy sport in comfort. And maintenance will be extremely low.

“Sustainability is one of the key drivers of the project,” AECOM architect Luciano Di Domenico tells The Sustainability Report. “We’re in an industry that is overwhelmed by technology, but the key thing is to deliver a simple solution and provide what is really required.

“We wanted to do something simple, but at the same time something distinctive for Japoma, Douala and the entire community.”

Being built into a hillside, three-quarters of the stadium will not require any lifts or staircases, with spectators in the upper and lower tiers sharing the same concourse. It will also be developed with a perforated facade with ventilation slots to create a microclimate in the venue without using any energy.

J Parrish, AECOM’s global sports director, explains: “In London we get about 700mm of rain per annum. In Cameroon you can get that in one month. It is wet and also warm, so we don’t want to put energy into this. We want to encourage air flow.”

Keeping costs and maintenance low for the long-term will be the ultimate indicator of success for the development. The last thing anyone associated with the project wants is a white elephant that is too costly to look after. Brazil, another football-mad developing country, bears the scars that Cameroon will hope to avoid, with a number of facilities built for the 2014 World Cup and Rio 2016 Olympics standing vacant and in a poor state of repair.

“I think the big issue here is what happens when a nation wins and has to deliver a major tournament requiring very large stadiums. How do you manage those facilities in an economically sustainable way in legacy?” Peter Ayres, senior engineering director as AECOM, asks rhetorically.

“In this case,” he continues, “the stadium itself is designed to host athletics and football to give it more usage. The community sports hub will be open to the general public, not just elite players, while the stadium bowl is configured in such a way that the stadium can operate using just the lower bowl for smaller events so that running costs can be minimised.”

A district energy centre is being built to service all of the new facilities to “get more of a efficient operation”. Catering and hospitality options will also be limited street food being served on the stadium concourses.

“You need to make things as low maintenance as possible in that part of the world,” warns Ayres. “If it requires maintenance, it never happens and just falls apart.”

Both Ayres and Di Domenico emphasise the importance of giving the stadium a local identity. The latter designed the venue with colours and artwork typical of the region, and revealed that lots of the building supplies, such as concrete and aggregate, were found locally.

“That’s the key of this project,” he says. “Involving the local community and having the cultural aspect reflected in the stadium design.”

Located between the beaches of Douala – an important port city for Cameroon – and dense rainforest, the site will also be home to a new residential development, which will be built when the tournament has concluded.

Those involved are optimistic the whole project will create a sustainable legacy for a sports-loving nation that is still developing, while Parrish hopes the simplistic nature of the design will turn the tide during an era of sports architecture that is constantly seeing boundaries pushed when it comes to high-tech innovation and maximising profits. After all, Japoma was the only sports project nominated for 2018’s World Architecture Festival.

“We’re seeing this huge move in direction, echoing what happens in America and looking at ways to charge people for sitting on that seat. Personally, I think we’re missing something here,” says Parrish, adding that visiting professional sports venues in the developed world was becoming like a “shopping experience”.

“I have to say I do question modern stadium design,” he adds. “I do wonder, when this opens and the people of Cameroon are enjoying this for their events, who is going to get most enjoyment. Those of us who go to a stadium in the west, with so much food we don’t know what to do with it, adverts every moment of the day and a lack of optimal view? Or is it going to be them, closer to the action?

“I have a sneaking suspicion they’re going to be very happy with it, and I sincerely hope so.”